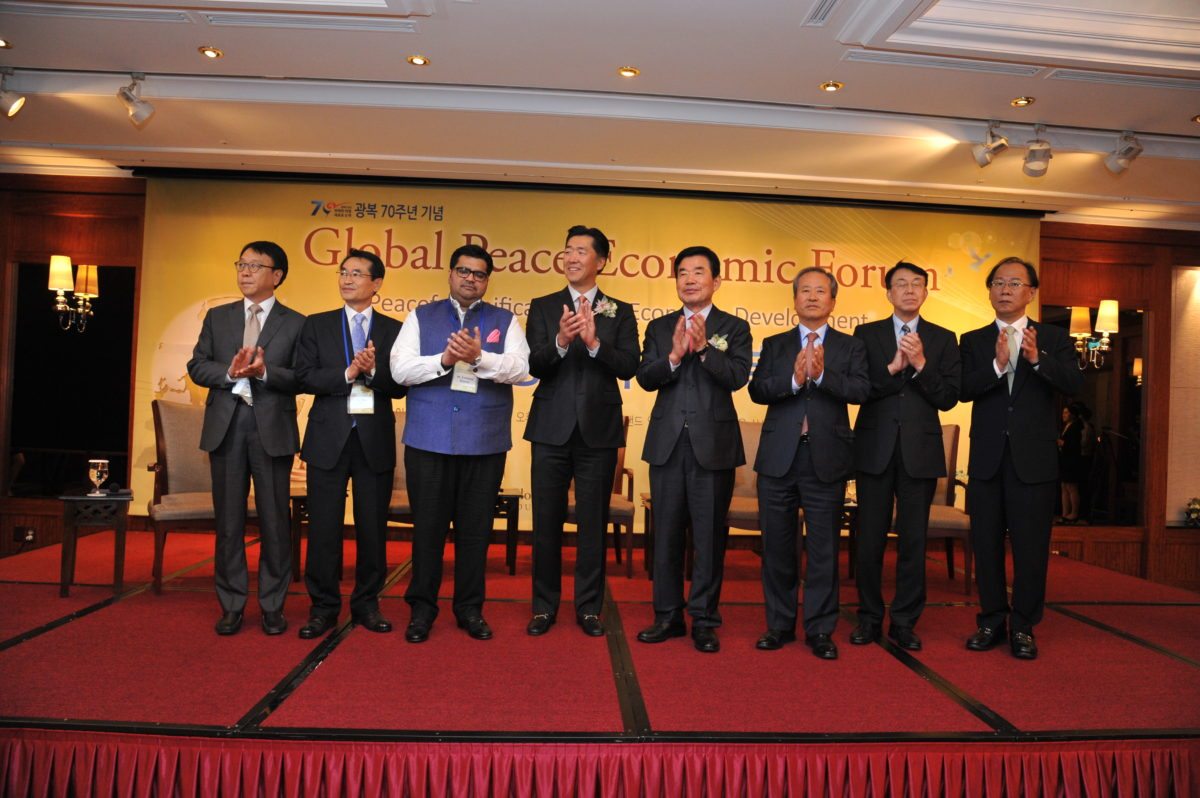 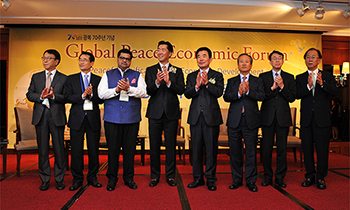 The Seoul Economist published the following article based on their interview with Dr. Hyun Jin Moon, who was in Korea for a series of events related to the movement for Korean re-unification. At one such event, the Global Peace Economic Forum held on October 8th, he delivered a keynote speech expressing that economic reform in the South is critical for a successful reunification. He urged South Korean financial institutions and government policy-makers to allow everyday entrepreneurs more access to capital to stimulate the economy and create job opportunities for Koreans both North and South.

Dr. Hyun Jin Moon, Chairman of the Global Peace Foundation (GPF), emphasized on October 8 that “successful economic reforms are critically needed to prepare for Korean reunification.” He continued, “Innovation and deregulation of the financial markets is necessary.”

In his keynote speech at the “Global Peace Economic Forum: Celebrating the 70th Anniversary of Independence” at the Grand Intercontinental Hotel, Dr. Moon called upon the Korean Government “to step in and support financial institutions to make their capital more competitive and global in reach.” Dr. Moon, who hosted this event, created a sensation earlier last year with his book ‘The Korean Dream’, which outlines his approach to reunification. He writes, “The peaceful unification of South and North will not only benefit Koreans, it will mark a significant turning point in our history and throughout Northeast Asia. It will usher in a new paradigm for peace that will secure prosperity and harmony across the globe.”

The following is a summary of his speech:

It is a great honor and privilege for me to welcome you to the first international Global Peace Economic Forum here in Seoul, on the heels of the historic 70th anniversary of Korea’s liberation from Japanese occupation. We will discuss the establishment of a 21st century economic model for a unified Korea. New winds of change are sweeping the Korean peninsula calling for its reunification. Last year in my newly published book ‘Korean Dream’, I mentioned these changes and gave a new prescription for unification that transcends the old Cold War paradigm.

Economic reform is critically needed. Otherwise, the outdated economic structures of the South will face tremendous challenges in trying to support the unification process. The time to rethink an effective economic strategy with its structural implications is now, well before unification. Even with this shrinking labor pool, South Korean business lacks the capacity to provide the jobs and opportunities that many capable young people need.  I believe this is directly attributable to the “crony capitalism” that gave rise to the chaebols, and the subsequent rise of a countervailing militant-organized labor movement.  In general, the economic landscape needs to provide a level playing field with simpler laws, fewer regulations and easier access to capital for everyone, not just the privileged few. Engaging more Koreans in “capital creation” will stimulate the South’s economic engine far beyond current levels and create the necessary job opportunities, not only for the South, but the North as well.

I believe the most effective and critical path toward that paradigm is to challenge and reform the current systemic limitations in the financial industry and the related government regulatory systems. That is why Korean financial institutions, with the support of government policies, should not merely sit on their excess cash but should deploy a greater portion of their capital toward financing new growth and opportunity. Korea’s long term viability and growth hinges on the financial sector facilitating growth abroad, which, in turn, will tie those markets to Korea. However, Korean financial institutions today remain notoriously bureaucratic, inefficient and risk-averse, unable to function effectively in connecting capital with opportunities both domestically and abroad. In comparison, while not perfect, their U.S. and European counterparts undeniably excel at capitalizing on unique growth opportunities. They always look beyond the current market situations from which they safely operate and constantly seek the necessary tools to bridge existing limitations and restrictions.

I have been leading nationwide reforms in Paraguay through GPF and the foremost think-tank institution established there in 2008. In the early 2000s, Paraguay was an environment of major political and economic uncertainty, making it a textbook example of a place unfit for foreign investment, yet now it has risen to become one of the most promising marketplaces. However, I have hit a wall when speaking with the heads of Korean financial institutions about the exciting opportunities in Paraguay.

Systemic problems as well as the bureaucratic mindset that plague all government institutions have prevented them from taking bold, innovative steps to capitalize on the obvious opportunities, as they opt for safe mediocrity over value-maximization.

The Korean government needs to step in and support the financial institutions to make their capital far more competitive and global in reach. /Reporter Hee Young Noh