“It is amazing to consider that as long ago as the third millennium B.C., our ancestors’ lives were already guided by the philosophy of “Hong Ik In Gan.” In other words, they sought to live “for the greater benefit of mankind.

This remarkable philosophy, which you might think was something that could only emerge in modern times, has been a guiding and unifying thread throughout Korean history. It has been a source of moral and spiritual strength in Korea’s many periods of suffering.” Global Peace Leadership Conference 2012, Dr. Hyun Jin Moon 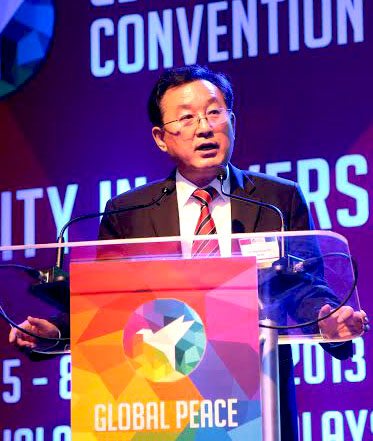 Secretary of the Saemaul Movement Center, Mr. Myung Soo Cho explains the strengths of the movement at the Global Peace Convention 2013.

In recent years there has been increased attention given to the Korean Saemaul, or New Village, Movement from entities like the United Nations and G8, as well as individual developing nations like Uganda. In the rush towards the Millennium Development Goals, traditional models of aid and development are being re-examined, and alternative community driven models like Saemaul are being considered.

During the Global Peace Convention 2013, Secretary of the Saemaul Undong Center, Mr. Myung Soo Cho explained the essence of the Saemaul Movement. Mr Cho said, “I think that the most important factor is the change of mindset.”

The first step of this shift, Mr. Cho explained, was to place the community at the heart of the projects. This concept was implicit in the name, Saemauel, which means new village in Korean. The Saemaeul Movement Center explains the movement was about “not working for only oneself, but for the village for the country.” From the very first project, where the government supplied bags of cement to rural villages, communities were pulled together to be the decision makers and the creators of their local development. This process in essence rebuilt Korea’s national identity.

Second to this mindset change was to instill the spirit of “diligence, self-help and cooperation”. The process of community driven and owned projects revived the Korean spirit of optimism and self-reliance. Cho explained that the government only subsidized the projects and held the community responsible for a portion of the costs. As a result the people realized “they can do it if they work together.”

This mindset transformation was central to the miraculous economic growth of Korea. Mr. Cho explained that in a matter of four years, rural incomes surpassed urban household income. Aid statistics show that prior to 1974, foreign aid grants made up 60% of all investments in South Korea.  By 1974, during which the Saemaul Movement was implemented, it dropped to 20%. Eventually due to Korea’s rapid economic growth, the United Stated phased out its aid program.  Today, Korea is a major aid provider. In its recent partnership with the UN World Food Programme, the South Korean government has given millions of dollars to the development of rural regions of countries like Nepal and Rwanda.

In his editorial to the Korean Times on the occasion of Saemaul Day, Oe-chool Choi, chairman of the  Global SAEMAUL Forum wrote that a core value of the Saemaul Movement is the “the spirit of sharing”. He writes in his proposal for a global New Village Movement, “Service may be said to be the physical embodiment of the sharing spirit, and creativity is a value aimed at sublimating the Saemaul Movement in a world-community movement pursued in common with people all over the globe.”

There has been criticism and limitations of the Saemaul Movement, but there are also elements that teach crucial lessons for emerging nations. The movement revived a dream that transcended rural and urban, rich and poor, and bound them together to work based on common principles such as sharing, and cooperation. The vision included spiritual and material prosperity and worked towards a common good –traces of Hong Ik Ingan guiding Korea’s way forward.