Revisiting Korean Culture: Pride in the History of One Korea 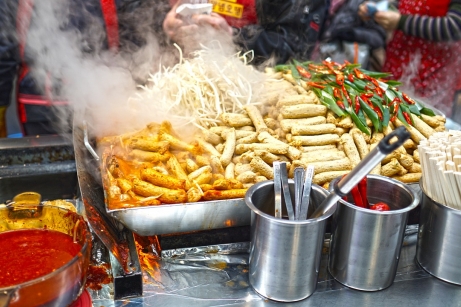 HK is a Korean American high school student that has participated in the One Korea Global Campaign for several years. As part of the 7 million people in the Korean diaspora, HK’s story represents a powerful voice for a free, independent, and united Korea. The following is her story from Global Peace Foundation showcasing her heartwarming experience reconnecting to her family’s homeland of Korea and the traditions that are a reminder of the thousands of years of shared history between both North and South Korea. Read her first blog HERE.

I landed a few days ago in Korea after several years! It was very nostalgic and fun to see the change in the environment. The weather is very hot and humid, but if you go into the buildings you encounter blasts of cold air, at least in the cities. Everyone seems very busy, but when I talked to the old ladies and shop owners they were all very jolly and kind, reminding me of a warm grandma or aunt. While I was eating in a restaurant, whatever we asked for came to us in five minutes, no matter how busy the place was. Every little thing we asked for, you could tell she did the best she could.

In the morning we would always eat rice with veggie side dishes, such as tree root, soybean sprouts, cucumbers, and kimchi. Sometimes we would eat fish. Korean food is so healthy; it includes many different plants and uses the entire body of the animal so it wouldn’t go to waste. The Korean people used everything they could to eat and survive in the past, things that other people wouldn’t notice or use, maybe thinking it was kind of weird. In other countries, such as America, whenever we ate out, my mother would sometimes be sad at how much waste they produced from animals like fish or cows. “Do they know fish guts are so tasty?!” My umma (mother) would say, “Ahhhh they should’ve used the cow bones to make soup! In Korean food, they use everything.” And berate me when I left food on my plate. Korean food is really healthy, and they even managed to make it pretty tasty!

When I went to Gyeongbokgung Palace we visited some cultural museums on one of the hottest days of the month. I was surprised at how many foreigners wore hanboks (traditional Korean outfits) in the palace even though it was so hot! Those dresses are not light clothing either; they are full of thick layers. But understandably, they loved the beautifully detailed embroidery and the pretty fabric. In one of the museums, I saw a video on how hanboks were made back in the day. I was shocked at how much work was put into a single hanbok! Just making one thread was so hard, and the people working were old grandmas and grandpas whose backs were literally bent 90 degrees. But they still worked so hard to create even a really plain, cotton hanbok. Their heartfelt attitude was so admirable, pouring in their jungsung (sincerity). What history even the dresses had!

This is the culture I really admire and am so proud to be a part of. I hope Koreans keep their traditions and heart of hongik ingan (living for the benefit of humanity), and with unification, perhaps we can all learn to exemplify the best of what makes us Korean, whether we are from the North, South, or diaspora, as one.