Principles and Values – the Bedrock of Civilizations 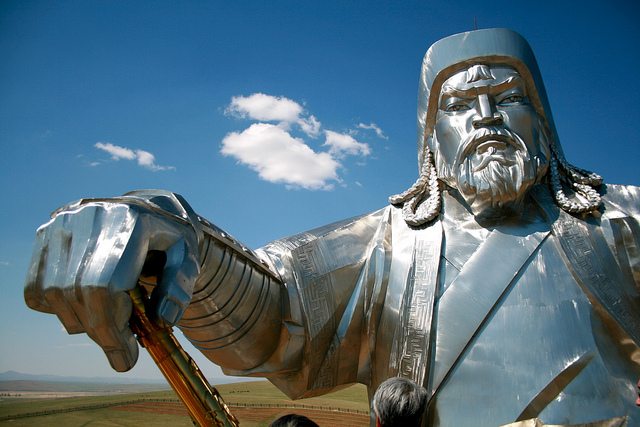 In Genghis Khan and the Making of the Modern World, Jack Weatherford presents an intimate retelling of the life of Genghis Khan, from his tragic youth to his pursuit of a vision to unite the whole world under the Eternal Blue Sky.

The story recounts the rise of one of the largest civilizations in history, stretching from Europe to China and the Middle East that began with one individual inspired by a vision. Genghis Khan was then able to give substance to that vision through the promulgation of laws and a system that upheld the principles and values of that vision.

The Yassa, or Great Law of the Mongol Empire, “recognized the ultimate supreme law of the Eternal Blue Sky over all people.” It allowed for freedom of worship, acknowledging individual merit and more, all expressed in the laws and culture of the Empire, which created social cohesion in a wide-ranging and hugely diverse population.

Weatherford observes that Genghis Khan held himself to these laws. “At a time when most rulers considered themselves to be above the law, Genghis Khan insisted on laws holding rulers as equally accountable as the lower herder.”

As Genghis Khan detailed in a letter he sent to a monk in China, he strove to treat his subjects “like his children” and treat talented men “as his brothers”, despite their differences. He worked with his officials closely, and although he differed in culture and even religion, he wrote, “We always agree in our principles and we are always united in mutual affection.” In this way, Genghis Khan was able to expand the notion of kinship to go beyond blood ties based on loyalty to principles with the warmth and care of mutual respect.

At the end of his life, Genghis Khan warned his sons to continue to follow the Great Laws or face ruin. His warning ominously speaking to the breakdown over the next three generations who grew farther and farther from the origins of their legacy, as they became preoccupied by protecting their power and assets rather than pursuing their father’s dream.