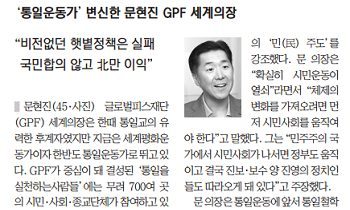 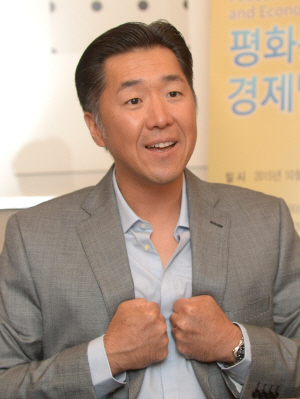 Dr. Hyun Jin Moon had an interview with the Korean news publication Munhwa Times. He emphasized the important role of civic-led movements in leading the nation. He also advocated that a clear vision for the future of the peninsula would be the key for unification to be successful.

Unification only achievable by a civic-led grassroots movement, rooted in Hongik Ingan

Hyun Jin Moon, Chairman of GPF, once was an heir apparent of the Unification Church, but now he is an outspoken activist for world peace. Moon has recently founded Action for Korea United (AKU) that consists of more than 700 civil groups.

On the 8th and 9th of October, GPF held an International Forum for Korean Unification, a Unification Economy Forum, and the Action for Korea United Leaders Assembly where thousands of people participated including high-profiled politicians, experts and citizens.

In an interview, Moon said, “For the first time in Korean history, you have the rise of a civic movement that includes the conservative and progressive camps, all religions and many civic groups. This initiative is the first time in which the civil society is engaged in the unification issue.”

Moon emphasized that the unification movement has to be “civic led.” “Civic organizations are absolutely the key,” said Moon. “If you want to change the system, you first have to move the civil society.

In a democracy, if you can move civil society, politicians from both left and right will follow.”

According to Moon, before creating a unification movement, it is essential to establish the unification philosophy and the framework of discussion on unification.

“Following independence, the Cold War framework was imposed on Korea. Yet, it is the Koreans that have adopted that and have been in continuous state of conflict for more than 70 years,” said Moon. He urged that Korea needs to come out of the mindset of the Cold War.

Moon’s unification approach is based on the “Hongik Ingan” philosophy, which means to “Benefit all mankind.” According to Moon, “the west take pride that they promoted ideals such as human rights. However, Korea already had such lofty ideals at its founding, 5000 years ago,” and emphasized that “the basis of discussion of unification has to be the Hongik Ingan philosophy, not the Cold War mindset.”

Moon pointed out that a “vision” and a “national consensus” are necessary in order for this unification movement to be successful.

Moon mentioned the Sunshine Policy as an example of a failed unification movement. “One of the reasons why that policy failed is because there was no comprehensive vision and national consensus in terms of what our outcomes should be.  You had a piecemeal engagement strategy which the North took full advantage of.

In any movement the people have to be owners; it is more so the case in this movement for unification.” Moon quoted Genghis Khan, “If one person dreams a dream, it is but a dream; but if all people dream that dream, it becomes a reality.” His words gave me strength.

On October 8th 2015, Representative Musong Kim from the Saenuri Party; Jong-gol Lee, representative from The New Politics Alliance for Democracy; and Edwin Feulner, the founder of the Heritage Foundation participated in the Action for Korea United Leaders Assembly in Seoul.