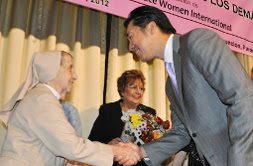 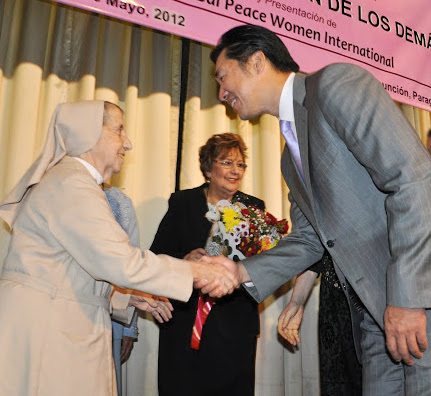 Dr. Hyun Jin Moon, chairman of the Global Peace Foundation and 2012 “Living for the Sake of Others” award recipient Mother Candelas Camarero in Asuncion, Paraguay.

In May 5 2012, Mother Candelas Camarero received Global Peace Foundation-Paraguay’s annual “Living for the Sake of Others” award.  Every year the award is presented to unsung women heroes of Paraguay. Their exemplary and often unrecognized service has left many significant and positive marks on the communities and individuals that they have touched.

Mother Camarero is director of a home for girls. She has taken in over 500 girls since the home opened. The home bears the name of San Luisa de Marillac, humanitarian and co-founder of the Daughters of Charity of St. Vincent de Paul. Appropriately, Mother Camarero’s life closely emulates the teaching of San Luisa: “Take good care of the service of the poor. Above all, live together in great union and cordiality, loving one another in imitation of the union and life of our Lord.”

In addition to her work as director of the San Luisa De Marillac Home for Girls, for the past 20 years, Mother Camarero has visited local prisons every Sunday. With the inmates she sings, prays and conducts mass.  Every other week, she also visits areas of the Chaco to take food to indigenous settlements. In the area she has supervised the construction of houses, schools, wells, windmills, roads, and a health center.