In Victory and Defeat: “With Malice Towards None, Charity Toward All” 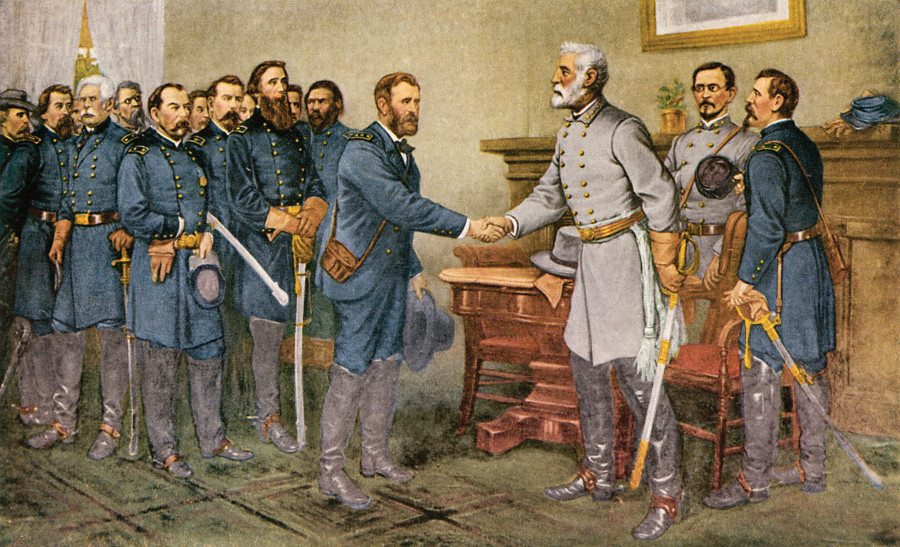 The U.S. Civil War was and still remains among the bloodiest war in U.S. history. The war had turned brother against brother, neighbor against neighbor, and after the loss of hundreds of thousands of lives, the country was weary of war and hoped for peace.

There are numerous accounts of the intimate moment in the small village of Appomattox Court House that officially concluded the American Civil War. The quiet encounter between General E. Lee of the Army of Northern Virginia and General Grant, Lieutenant-General of the Union Army, was perhaps a special moment in time that holds lessons for us today in ending war, and making and keeping peace.

General Lee, battle weary but flawlessly dressed in his grey uniform, ceremonial sash and sword, tense with anticipation, waits for General Grant, to whom he has made his surrender through written correspondence over an hour ago.

General Grant finally arrives, his boots spattered with mud, his blue uniform unbuttoned, with only his shoulder bands to indicate his rank over a private from his troops. Unexpectedly, he then begins to reminisce with General Lee about the Mexican War they had fought together so many years before. In that moment, they stood together, not as a victor over his vanquished enemy but as old comrades.

Lee’s surrender 1865. ‘Peace in Union.’ The surrender of General Lee to General Grant at Appomattox Court House, Virginia, 9 April 1865. Reproduction of a painting by Thomas Nast.

Time passes until Lee, his mind heavy with the burden of responsibility he still carries for his surviving soldiers, reminds Grant of the purpose of the meeting.

Grant sits down on the other side of the room, jotting down the terms of surrender in a letter and handing it to Lee. They are generous terms, allowing the soldiers to return home with the surrender of their arms. An account recalls Grant glancing down at Lee’s own sword before adding a provision to allow the Confederate troops to keep their personal belongings and side arms, including swords.

Lee reads the terms, and explains that most of the horses and pack horses are the personal belongings of his soldiers. Grant amends these terms to allow those to keep their own horses and the two shake hands. 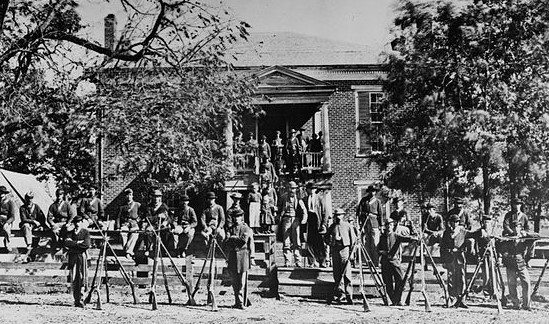 Union soldiers outside the courthouse in 1865, Photographer Timothy O’Sullivan

While many have noted General Grant’s generally magnanimous nature, it was the unseen hand of President Lincoln that allowed for such generous terms at the end of a long and bloody war. General Grant had received strict directions from President Lincoln to keep the way open for reconciliation and reconstruction. A few months earlier, Lincoln delivered his second inaugural speech, making clear that his first priority was to the rebuilding of the Union, “With malice towards none, and charity to all,” he noted in his eloquent and concise prose.

The terms of surrender preserved the dignity of the Army of the South and in so doing kept open the way for reconciliation. Later that day, accounts record men from both sides gathering together to eat, drink and talk as if old friends. It was a glimpse into what could have been under the leadership of a team committed to the reconstruction of both North and South. Yet the country would be robbed of this possibility just a few months later at the hands of an assassin who felt the racial divisions were inviolable

In the midst of conflict, it is easy to dehumanize the other, but when coming face to face with the enemy, seeing their faces, their families, their homes, realizing that they are related in more ways than not, the heart is opened to forgiveness, reflection and reconciliation.