Korean Character Shines at the Olympics 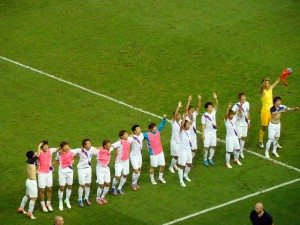 The following is an abridged expert from the address given to Ambassador for Peace on August, 11, 2012 in Seoul, Korea. 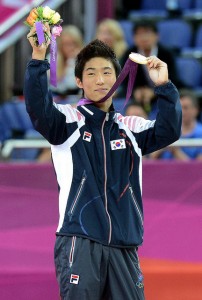 Yang Hak Seon won Gold in Gymnastic men’s vaulting. He is known for his signature move, “The Yang,” which to date, only he can perform.
Credits to Flickr, KOREA.NET

The 2012 Olympics have recently come to a close. There, the Korean people showed their true character to the world. Although this is a nation of less than 50 million, it ranked fifth among all the gold medalist nations in the world—surpassing nations that have populations twice or even three times the size of this Korean republic.

So it’s not only the industry, such as Samsung and Hyundai that carry the Korean brand to the international community. It is not only the culture, the K-pop culture that is influencing many young people not only in Asia but also in the West. It is the Korean character that was exhibited at the highest level of athletic endeavor. This is where the spirit of the Korean people showed itself to the international community. It was really poignant.

The burden that a Korean athlete representing this nation carries is a heavy one. Yet, this is a time in which they can be proud as a nation and proud in their character that has been exhibited to the world.

And what is that character?