I alone cannot change the world, but I can cast a stone across the waters to create many ripples. —Anonymous

In the last century alone, citizens have created popular movements to bring about tremendous social change that created a ripple effect, transforming their society and the world at large. However, whether such movements draw out positive or negative consequences relies on a few key ingredients.

The power to move people to rise up and defend a noble cause always starts from a powerful guiding vision rooted in fundamental truths that transcend things such as religion, politics, and ethnicity. The movements led by great men such as Mahatma Gandhi, Nelson Mandela, and Martin Luther King, Jr. reflect this very point. These men stripped themselves of their own narrow pretensions and developed a method and message that would touch the conscience of the masses.

This moral authority did not come from position, money, or power. Rather, it was a message of fundamental human dignity and the innate spiritual value of every person that stirred humanity’s collective consciousness and inspired substantial social change. 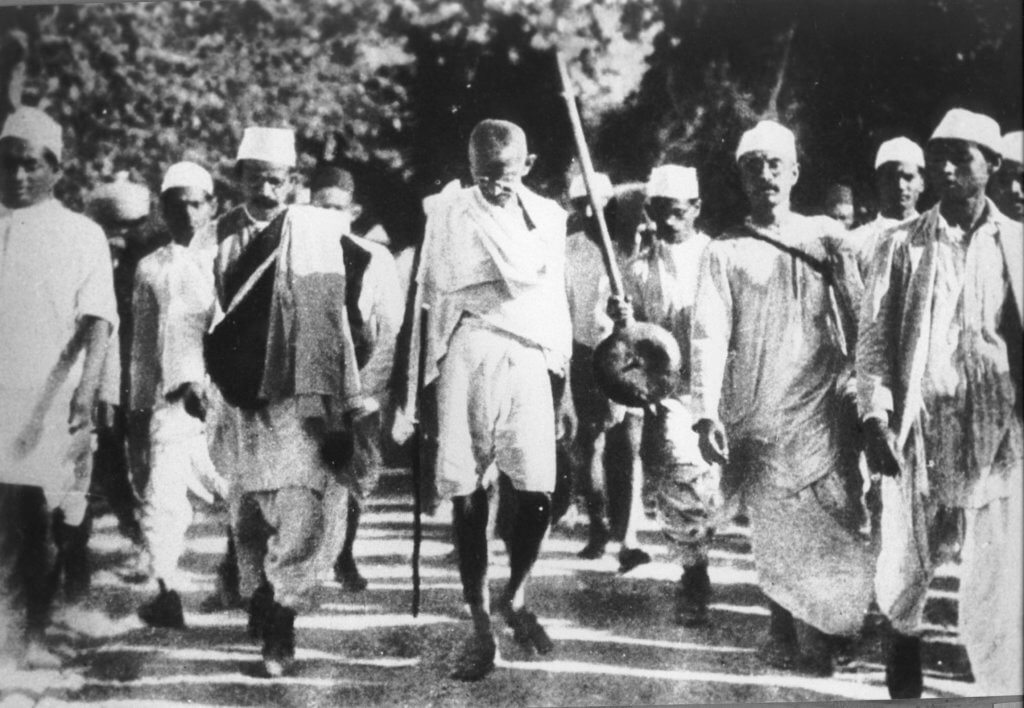 Gandhi (center) during the Salt March of 1930

Ghandi’s spiritual philosophy, Satyagraha (truth force), promoted nonviolence and noncooperation with the conviction that truth, expressed peacefully, would expose the falsehood and injustice of oppression in South Africa and India. The moral power of this vision resonated with men and women of conscience in every nation.

When the apartheid system crumbled in South Africa, there was a real danger that the white minority would experience revenge for the oppression suffered by dark-skinned Africans. However, Mandela, even after 27 years in prison, and other powerful moral leaders like Archbishop Desmond Tutu preached reconciliation. This ensured a peaceful transition at a critical moment in South Africa’s history, with timeless lessons for us to consider for challenges we face even today.

In 2012, Rev. Bernice King, daughter of Dr. Martin Luther King, Jr. attended Global Peace Foundation’s annual convention in Atlanta, Georgia and spoke to her father’s commitment to peace beyond all barriers saying, “I don’t characterize my father as a civil rights leader. I characterize him first and foremost as a spiritual leader, as a man of God, as a moral leader who just happened to impact civil and human rights. And so everything that he did came out of his spiritual foundation. It didn’t come from his political ideology.”

There are still many regions around the world that require progress for social change to bring our world closer to peace. Today, we can look to the Korean peninsula, a civil rights issue rising to the forefront of global security and fundamental human rights concerns.

Korea stands at a transformational moment in its history. The danger posed by a divided and nuclear peninsula has become unavoidable. The unification issue is an urgent one. Yet, bringing about peaceful reunification cannot be based on anger and resentment, but a vision guided by the inherent value and spiritual dignity of all people.

Much like the guiding visions of successful people-powered movements like those in South Africa, India, and the United States, Korea has the opportunity to forge a new way forward through its founding vision of Hongik Ingan to “bring benefit to all humanity” as a reunited nation.

Vision, universal principles, and the moral authority of passionate individuals have, throughout history, awakened the conscience of a people to then transform society, nations, and the world. The power is, in fact, within each of us. And the time is now to discover this for ourselves, for the sake of lasting peace and shared prosperity.

How are you helping transform our world today?