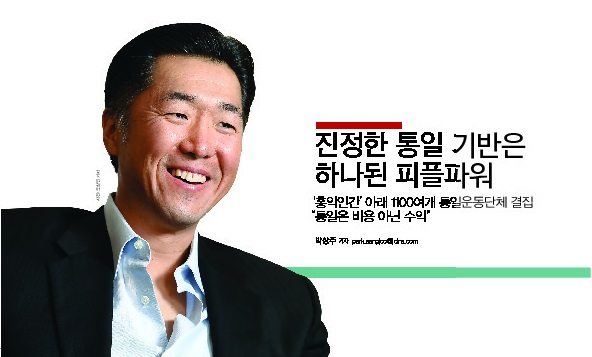 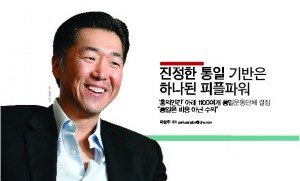 On October 6th, 2015,  Dr. Hyun Jin Moon had an interview with the Korean news publication JoongAng Economy. He explained his vision and approach for a peaceful Korean reunification that can benefit both Koreas’ economy.

In the wake of the ongoing global recession, many experts are saying that the annual growth rate of the Korean economy next year may dip below zero due to low productivity and low demands.

Others suggest, however, that unification would get the ball rolling, because North Korea would become a new investment market and base for production that would feed the economic system of the entire Korean peninsula. Currently, 51 million people are living in South Korea. After unification, the population of a unified Korea would reach 76 million in total. This means Korea’s dependence on exports would decrease, and domestic demand would increase. Therefore, people are starting to use words such as “opportunity” and “the only breakthrough point,” in reference to unification, instead of seeing it only as a “cost.”

This year marks the 70th year of division, and the passion for unification is greater than ever before. For the first time since the division, the conservative and liberal civic organizations are coming together to start a unification movement. There aren’t the heated ideological debates flying around like before. On August 15, the National Liberation Day of Korea, “The New Era Unification Song” campaign, led by civic organizations and supported by the government, started in major cities of several countries such as South Korea, the United States of America and China. It was a symbolic event that showcased the character of a civic-led unification movement that transcends ideological divides. On October 9th, over 30 K-pop singers performed the new unification song at Seoul World Cup Stadium as part of the campaign.

Q: Why did you change the unification movement to become a civic-led movement?

“For over 60 years, our government insisted that unification was not possible because the two Koreas were in a state of confrontation. On the other hand, civic movements were not part of the unification movement, largely because it was viewed as a government issue. If you look at Germany, Mongolia, Vietnam, or Eastern Europe, you will realize that it is the bottom-up revolution that eventually brought forth change. The unification movement for Korea also has to be a civic-led movement to bring about significant change.”

Q: Why did you propose “Hongik Ingan” as the vision to bring the divided 1100 civic organizations together?

“When I met the leaders of unification movement groups, I realized that although we have broken away from the Cold War system, we Koreans are still divided by ideologies. In order to break away from the Cold War mindset, we need to change the framework and realize the common destiny of the Korean people that is outlined in Korean history. I proposed “Hongik Ingan” because we need a clear vision that goes beyond the identity of North and South Korea and can resonate with all people. All these organizations can come together because this is the first unification movement that is rooted in history and identity.”

Q: Your father, the late Sun Myung Moon, also made efforts to help the two Koreas open up to each other. How are you going to continue his works?

“I learned about my father’s movement for unification through direct experience. I am further expanding and developing upon it to substantially build the necessary foundation and strategy for unification. I want to encourage young people to become more passionate and develop conviction in unification. My hope is that all Koreans have the dream of building a nation rooted in “Hongik Ingan.” If all Koreans have the same dream, it can become a reality.”

Q: We currently have the 6-party talks to resolve the conflict between North and South. But you proposed a 7-party talks. Why do you include Mongolia?

“The top thinkers of American foreign policy are excited about this idea of Mongolia becoming a seventh member. Mongolia once was the largest empire in the world. Its borders spanned from Korea to Europe and from the Arctic to India. Mongolia also transitioned from communism to democracy without bloodshed. It is a tremendous model for how unification could look on the Korean peninsula, even for the North Korean leadership. Mongolia has embassies in both North Korea and South Korea. The 6-party talks basically consist of two stand-off groups, 3:3, and will never reach a conclusion. The 7th neutral intermediary is needed to offset the Cold War lineup and reach a conclusion.”

“When I first visited Paraguay in 2008 there was a US State Department advisory for American citizens not to go to there. The country was a basket case. In contrast, now we are making a model case of cooperation between the country’s industrial sector and government. Korean industry, especially financial companies, needs the direct experience of investing in and advancing a developing nation to a developed country status. By doing so, Korean industry can build the confidence to invest in the North. Paraguay can be a model for resolving the economic challenges of North Korea.”

Q: So, if we use the same strategy as Paraguay, instead of viewing unification as a cost, we could look at it in terms of its profit potential?

“Yes. I disagree with everyone who says that the expenses will be overwhelming. Unification is going to be a win-win situation. How much of a win-win it will be for both Koreas depends on the steps we make today. The more we are prepared, the bigger the pie that will await us.”

As the issue of the unification of North and South Korea rises in public interest, people are seeking a practical and long-term economic growth model of a unified Korea. Global Peace Foundation (GPF) held a Global Peace Economic Forum on October 8, 2015, with the theme “Peaceful Unification and Economic Development.”

Hyun Jin Moon, the Founder and Chairman of GPF, proposed “the 21st century economic model for a unified Korea” in his keynote address. Moon pointed out that due to regulations, financial institutions are unable to actively invest in countries with economic potential, such as Paraguay. He proposed the reform of such regulations and encouraged financial institutions to invest in developing countries as a means for building a successful economic system prior to, and after, unification.

Ju-hyun Kim, chair of the economic subcommittee of the Presidential Unification Preparation Committee said, “The combined economy of the two Koreas could reach G10 levels. With North Korea’s 14% projected growth, a unified Korean economy could maintain a 4% growth rate. That means if we manage the effects of integration well, our combined economies can become a central force in the world economy.”

Dong-ho Jo, President of Euhwa University’s Institute of Unification Studies, said, “Now it’s time to view economic cooperation between the two Koreas from the perspective of a shared economic future where we seek out new growth opportunities from them instead of just providing aid to North Korea. Over the past two decades, South Korea has been hesitating to establish itself as a leader in the world economy. Now it’s time for us to take initiative as a leader for Northeast Asian Economic Cooperation.”

Joon-wook Choi, senior researcher of the Korea Institute of Public Finance, advised caution of excessive optimism for reunification. “Regardless of the circumstances, it is critical to secure economic stability and sustainability.” He continued, “The extent of impact depends on how well and seamlessly we integrate all economic sectors.”