International Forum on One Korea Explores the Challenges and Opportunities Amid the Dynamic U.S.-China Relations 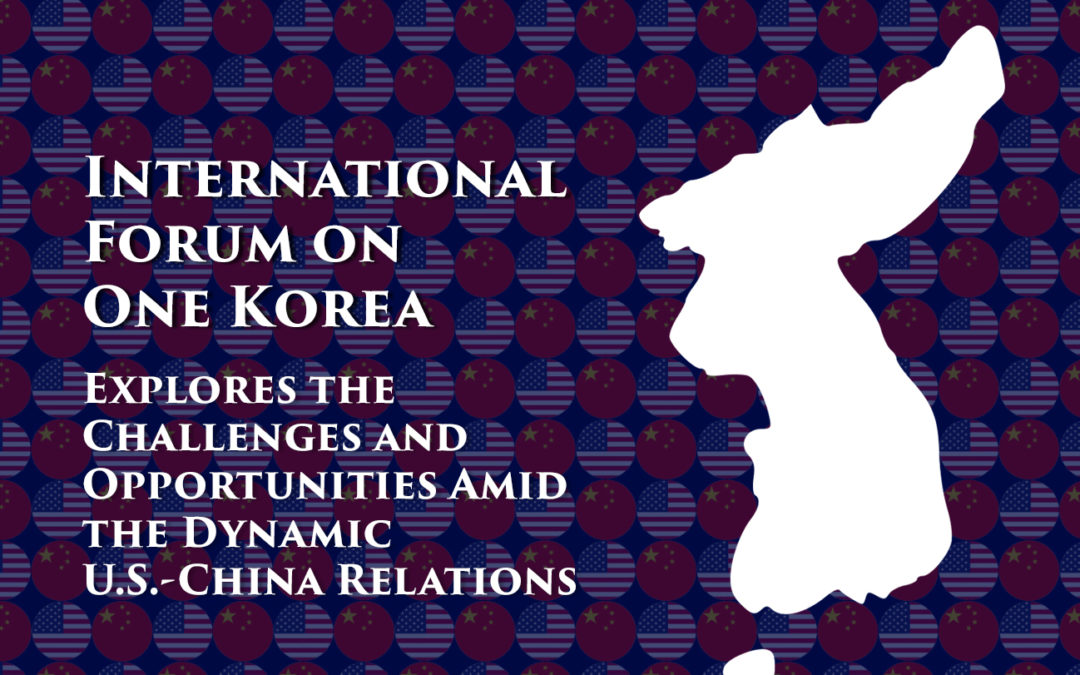 “The global pandemic is disrupting not only the social and working lives of individuals and communities but also relationships between nations. Governments are stretched to meet their domestic challenges. Vulnerabilities in the global economy and supply chain have been exposed. There will likely be significant political as well as economic ramifications forcing re-evaluations of old models, while at the same time opening up new opportunities.” —Dr. Hyun Jin P. Moon (International Forum on One Korea, August 2020)

The Global Peace Foundation has been at the forefront of developing a platform to advance a comprehensive approach to Korean reunification. Its work is largely based on a framework presented in Dr. Hyun Jin Moon’s national bestselling book, Korean Dream: A Vision for a Unified Korea. Based on the ideals, shared values, and history of the Korean people, the framework presents a vision of a free and principled unified Korea that advances regional peace and security, honor human rights, and promotes shared prosperity.

The 2020 International Forum on One Korea virtual forums, co-costed by partners like the One Korea Foundation, Blue Banner, Action for Korea United, and Alliance for Korea United – USA, has a dialogue on a broad range of issues, from denuclearization, human rights, regional relations, and citizen engagement.

On November 20, 2020, experts addressed the dynamic relations between U.S., China, and South Korea, “Free and Unified Korea: Challenges and Opportunities amid the Dynamic U.S.-China Relations.” The open dialogue presented divergent assessments of the roles of the United States and China in resolving the global security threats posed by the North Korean regime during a virtual forum,

Convened by the Global Peace Foundation, Action for Korea United, and the One Korea Foundation, the forum addressed the outsized roles of China and the United States in regard to North Korea’s nuclear program, advancing economic development, and securing human rights on the Korean peninsula.

The following article from Global Peace Foundation summarizes highlights from that discussion. 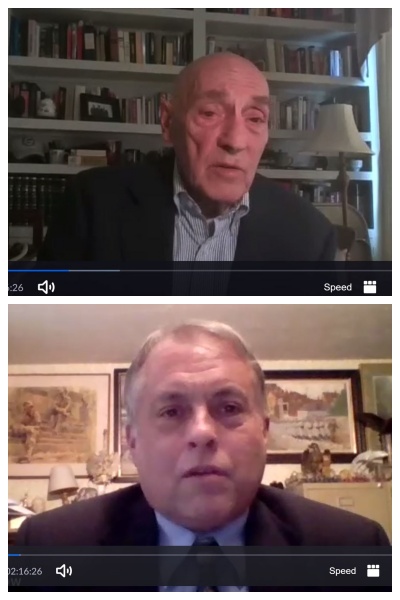 Bosco said that the “maximum pressure” campaign initiated by the Trump administration, comprised of stepped-up international sanctions, the threat of military attack, and exposure of human rights atrocities, and the prospect of regime change in North Korea persuaded Kim Jong Un to rethink North Korea’s provocative behavior. Yet just as Trump and Kim agreed to meet in the first-ever U.S.-DPRK summit in Singapore, Chinese President Xi summoned Kim to Beijing for a series of meetings, after which the North Korean position and rhetoric hardened. The follow-up Hanoi summit in February 2019 foundered without even a joint statement.

China and Xi’s intervention scuttled the opportunity for progress, Bosco said, adding that China had been involved in North Korea’s initial efforts to obtain nuclear materials. The North’s nuclear program provided a “distraction” that enabled China to play the role of the “essential partner” in restraining North Korea, which it had no real intention of doing.

Bosco said it was time to return to a maximum pressure campaign, with additional sanctions on China. “The world needs to realize that if the actions don’t change, regimes need to change.”

Cato Institute analyst Doug Bandow said that the objective of a unified Korea began in 1945, with North Korea leader Kim Il Sung seeking to unify the peninsula “on his own terms” through military force. Yet Kim Jong Un is different from father and grandfather, he said, with a greater concern for economic development.

“A major concern is a new cold war between the U.S. and China,” Bandow said. “Diplomatic contact is not a reward [for good behavior] but a necessary condition of engagement. If we want China’s help with North Korea, we must convince them it is in their interests and think of ways that would assuage their concerns. It is in all of our interests to have a peaceful, prosperous united Korea.” 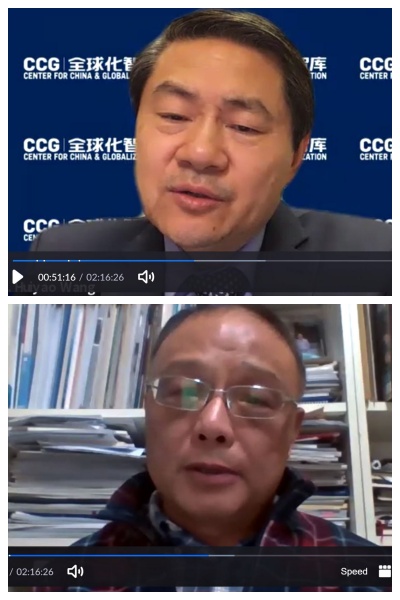 Dr. Huiyao Wang, founder and President of the Center for China and Globalization (top), and Dr. Feng Zhu, Dean of the Institute of International Studies at Nanjing University.

Two analysts from China, Dr. Huiyao Wang, founder and President of the Center for China and Globalization; and Dr. Feng Zhu, Professor of International Relations and Dean of the Institute of International Studies at Nanjing University, argued that China’s national interests were fundamentally aligned with a peaceful Korean peninsula, and that peaceful unification would benefit China and open the region to expanded prosperity.

Wang said that the incoming Biden administration could provide a new opportunity for a multilateral approach. “It is time to revitalize dialog between the U.S. and China, build mutual trust, find consensus and work toward a coordinated approach,” Wang said. Noting that China has had a lot of economic collaboration with North Korea and South Korea, he said that “economic integration is very important so that ‘mutually assured dependency’’ can replace ‘mutually assured destruction.’”

Dr. Zhu said there were lessons from the history of China and Korea. “Every time Korea unifies and is strong it is an addition to China’s national security.” He particularly noted Chinese paramount leader Deng Xiaoping’s decision to normalize relations with South Korea and Kim Il Sung’s attempts to block this effort. But Deng was consistent, Zhu said and knew that it would help China to integrate economically and socially into the world community.

Deng also tried to urge North Korea to follow China’s path, which unfortunately was rejected by Kim Il Sung. “Over time, the model of openness and reform proposed by Deng became very important as an easy, workable, peaceful approach for the two Koreas to become reunified.

Zhu harshly criticized American attitudes toward North Korea, its “stubbornness” and “attitude of supremacy in world affairs,” citing the George W. Bush administration’s labeling of the DPRK as a member of the Axis of Evil as an “unbelievably tactless and wrongful handling of the DPRK.”

During the Six-Party Talks, China and South Korea also cooperated well but the talks foundered. The reason is simple, he said: A conservative government came to power in South Korea that was wholly aligned with the United States. The third generation of the DPRK government reacted by taking steps that could ensure its survival.

China also supported the 2017 Security Council sanctions to impose fresh sanctions on the DPRK over its nuclear test, Zhu said. The Security Council resolution called for a peaceful settlement through diplomatic and political means, supported the resumption of six-party talks, and stressed measures to de-escalate tension on the peninsula as reported by Xinhua News Agency, the official state-run press agency of the People’s Republic of China. 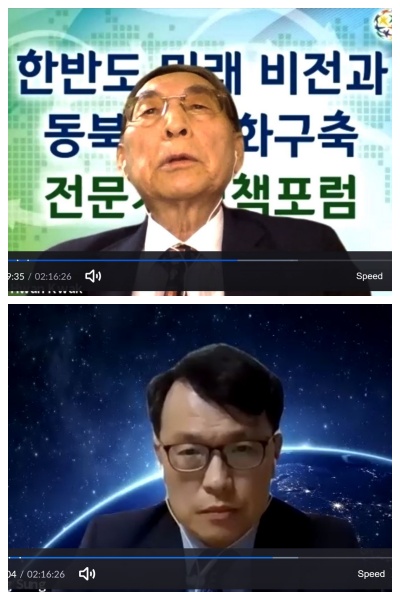 The end of war declaration would open door to denuclearization, Kwak said, but President Trump remained indifferent, preferring a peace declaration and visible progress in denuclearization to an end of war declaration, which would demand the removal of U.S. troops.  Second, North Korea is in an economic crisis due to international sanctions and the COVID pandemic, Kwak said. Its weapons program cannot coexist with economic prosperity. The third issue is South Korean policy and a new, NATO-like South Asia security network to balance growing Chinese influence that includes India, Australia, and other regional nations.

China’s role in resolving the Korea issue is as vital as that of the U.S., Kwak said. South Korea needs to practice balanced diplomacy, with due recognition of the complexities and national interests of both.

Dr. Ki-Young Sung, a Senior Research Fellow at the Institute for National Security Strategy, said that governments need to acknowledge that all policy approaches have failed, both maximum pressure and maximum engagement.  U.S.- China relations are going to be decisive, he said, while noting areas of common ground including climate change, cybersecurity, and denuclearization.

“The Korea issue needs to be included with these common issues,” Sung said, including the human rights of the North Korean people. “Few are talking about freedom, freedom from hunger and starvation, giving equal attention to humanitarian issues.”

Sung urged a balance between incentives and coercive measures and a multilateral framework, particularly to internationalize perception of North Korea’s record of human rights violations. 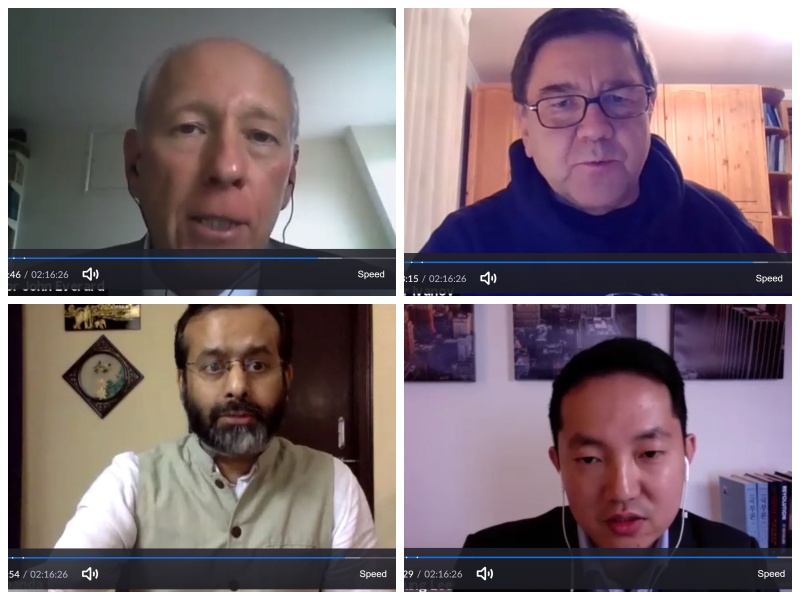 Following the presentations, experts from the UK, India, Russia, and North Korea presented responses. Former UK Ambassador to the DPRK John Everard said that the “hard fact is unification is not fervent wish,” with more enthusiasm in the North than in the South. He said the pandemic has had a shocking impact in the North, which is in need of massive aid, and many observers question if Kim has complete control.

Dr. Jagannath P. Panda, Centre Coordinator at the Manohar Parrikar Institute for Defence Studies and Analyses in New Delhi, asked whether the entire peace process would depend on dialogue only among the critical actors.

“Japan, Russia, China, and South Korea would like to see ‘non-critical’ participation, including India, Australia and Canada, at some stage to take part in and influence the peace process.”

“The road to unification must be a stable process, which has existed – if fragile – since the Korean War,” said Dr. Vladimir Ivanov, Senior Associate and Director of Mosco Office, EastWest Institute. “The Trump administration has been not consistent and tried to dismantle existing arrangements.”

Citing the example of relations between the U.S. and USSR, Ivanov said arms control agreements were sustained by the international community and in fact remained in force with Soviet collapse. It is important to think about how to shift from carrot and stick to a more sophisticated arms control policy that reduces factors that present risk, he said.

Finally, Mr. Hyun Seung Lee, a North Korean defector and consultant specializing in North Korea affairs, said there may be at least one common purpose shared by the U.S. and China: “the opening up of North Korea.” China has called for North Korea to reform for more than three decades, he said, and North Korea’s current and past leaders have said that they would, “but they have not kept their promise because they firmly believe that they cannot maintain the regime if North Korea reformed.”

“I strongly believe that the Chinese leadership should join forces with the United States to make Kim Jong Un accept reform and openness, applying maximum pressure instead of calling for reform with nice words.”