Honoring Grandpa: A Tribute to Veterans 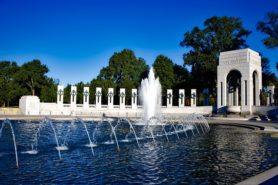 “Kinship among nations is not determined in such measurements as proximity of size and age. Rather we should turn to those inner things — call them what you will — I mean those intangibles that are the real treasures free men possess.”

In his most recent book, Korean Dream, Dr. Hyun Jin Moon discusses the importance of America’s founding ideals on a global scale saying, “The dream of America’s Founding Fathers not only gave birth to a great nation, unique in world history to that point. It also left substantial footprints throughout the world. It set out the ideal of universal human rights, freedoms, and responsibilities and made substantial sacrifices in pursuit of realizing that ideal. If America no longer takes the lead in this endeavor, who else will?”
-Dr, Hyun Jin Moon, Korean Dream: A Vision for a Unified Korea

Every year on November 11th, the United States honors the service of men and women who put their lives on the line to uphold the United States’ founding declaration. The following excerpt is a reflection of a granddaughter of a United States army WWII veteran on her grandfather’s legacy of service to his country and humanity.

“As we express our gratitude, we must never forget that the highest appreciation is not to utter words, but to live by them.” -John Fitzgerald Kennedy

This week on Veteran’s Day, we remember and honor the sacrifice and service provided by our men and women who have served in the U.S. armed forces.  We are surrounded everyday by real-life superheroes, not in masks with an alias, but adorned in uniform and known by titles, ranks, or a simple name. I called one of these superheroes “Grandpa.”

Every year our country sets aside one day to recognize these people but for many of us, the memory of just how much they gave is instilled in our hearts every day of every year for the rest of our lives. Some heroes will pay the ultimate price; sacrificing their lives for a country they love because of the people it holds. Others will make it home but continue to face a battle only they can fight. With the support of caring individuals these veterans will win that fight.

My grandfather was a hero who made it home to create a family who would grow to hear his World War II stories, experiences of excitement and terror. But those stories would soon be overshadowed by his exhilarating fishing stories, funny anecdotes by my witty uncles and aunts, and grandchildren who’s drawings and pictures embellished the walls. My grandpa had stuffed the WWII medals and honors into the shed, replacing memories of the fight with the things he was fighting for. Grandpa’s medals wouldn’t be recognized again for many years until after he passed away in January of 2013. He is missed every day.

Grandfather and WWII Veteran fishing with his son in Montana, USA.

Veterans like my grandfather found value in the service they provided for our country because they were protecting the fundamental freedoms and rights of their family.

Global Peace Youth-US recognizes the importance of showing our veterans their valuable service by providing opportunities for them to participate in meaningful community-driven development projects where they can interact with the community they serve. Veteran marine Nathan Sutton is the founder of Forward March, an initiative promoting the American ideal of “One Nation Under God” to the entire world as “One Family Under God.” Together, we can create a culture of service that uplifts the dignity of those who serve and those who receive the service of others.

Unable to truly express the depth of gratitude I felt for my grandpa while he was here, his heart of sacrifice for a greater purpose lives on in his family, community, and a country that was built on the rights of all people to life, liberty, and the pursuit of happiness.

Remember to give a special thank you to your superheroes this week.