In Honor of UN Peacekeeping Day and Memorial Day in America 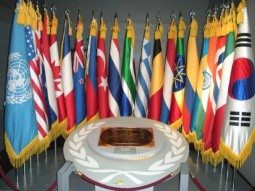 This week the United States is remembering members of its armed forces that  paid the ultimate price. The UN also commemorates its Peacekeeping forces’ commitment “to save succeeding generations from the scourge of war.”

Korean War Memorial in Seoul, Korea. Taking time to remember and honor all those who gave their lives in service.

These brave men and women gave their lives not only for their country, but for the welfare and peace of the global community. Their service for the greater good of humanity sets an example for us.  And it gives us hope for a world that can live in peace and prosperity.

Personally, were it not for the United States’ forces and the other 20 nations of the United Nations  that intervened in the Korean War, I would not be here today. The UN Forces pushed back the invading army and in the process liberated a North Korean prison camp where my father was prisoner. If they had come even a day later, he would have been executed.  I own a debt of gratitude to those soldiers who sacrificed their lives on unknown shores.

To those who have given their lives for country and humanity and to their families, thank you.

They have laid down milestones towards a world without war. A world of peace where humanity will recognize that it is one family.