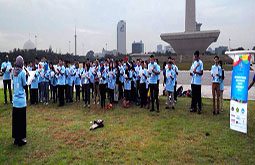 Participating youth and interfaith leaders of the International Multifaith Youth Assembly read their Peace Declaration in front of the National Monument of Indonesia.

“The universal principles and shared values of the world’s faith traditions  provide the essential basis for rising above conflict and building social  cohesion in diverse and multi-religious societies. They offer the antidote to the  threat of global religious wars. That is why cooperation among faith leaders is  essential for securing peace at this critical inflection point of modern history.”
Dr. Hyun Jin Moon, Chairman of the Global Peace Foundation at the Global  Peace Convention 2013

The Global Peace Foundation approach to interfaith cooperation taps into the moral authority of faith leaders as they collectively seek innovative and practical solutions to long-standing challenges to peace. In June, two interfaith programs in two very different regions of the world, Nigeria  and Indonesia, focused on cultivating cooperation and understanding among youth faith leaders. Both regions have grappled with creating cohesion in multi-faith, multi-ethnic and multi-tribal societies. Their shared challenges underscore how identity-based conflicts hinder development and thwart peace.

In Nigeria, the abduction of close to 300 girls from Chibok and the subsequent international social media campaign #bringbackourgirls has drawn attention to the bigger issue of inter-tribal, intra and inter-religious conflict. In South Asia, the move towards economic integration by 2015 has accentuated national, sub-national, tribal, racial and religious conflicts.GPF’s work is critical as it seeks to explicate universally shared values as the foundation for understanding and cooperation. 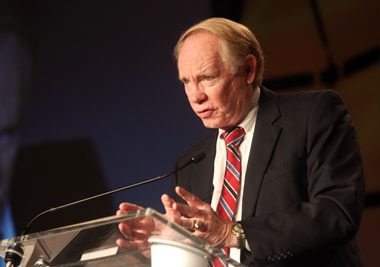 A recent blog on the Global Peace Foundation drew on the experiences of Dr. Douglas Johnston, a member of the Global Leadership Council and founder of the International Center for Religious Diplomacy (ICRD), a long-time partnering organization of GPF, to provide an up-close look at how interfaith-cooperation works. ICRD uses “Track Two diplomacy” to engage religion as a solution to religiously based conflict.

In 2007, Douglas Johnston conducted a round table with several Taliban commanders in the mountains of Pakistan. At the Euphrates Summit in 2011, he recounts that his objective at the time was “to see if we can build on religious values that we have in common to build a confidence-building measure that can point to peace.”

Significantly, Dr. Johnston does not shy away from his own Christian convictions, and he is not afraid to draw connections with Islam. At one point in the discussions, a participant stood up and confronted Dr. Johnston, “I cannot talk to you unless you are a Muslim.” To which Dr. Johnston responded, “I don’t see a problem with that. Muslim means submission to God, we all submit to God, and thus we are all Muslim.” Later that year, that same group of religious and tribal leaders became instrumental in the release of 18 Korean missionaries kidnapped by the Taliban.

This exchange illustrates what Professor Diana Eck of the Pluralism Project at Harvard University encourages as an “encounter of commitments” that becomes the basis for an “active seeking of understanding across lines of difference.” Rather than stripping away religious convictions, it is a quest to draw out the universal principles and shared values that can become the basis for cohesive, ethical societies amid diversity.

Yet, it takes a leap of faith to tread on “enemy” territory to discover common ground. It also takes clarity of understanding, as well as the courage to seek out connections that can cultivate respect and eventually, cooperation. 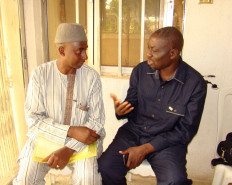 Retreats and assemblies such as the Interfaith Young Leaders  Retreat in Nigeria and the International Multifaith Youth  Assembly facilitate this process by providing a safe space to  explore common ground and commitments in places fraught  with tension and conflict. It is in these safe spaces among    those who are poised to shape the future as the parents,  teachers and leaders of tomorrow, we might imagine peace,  understanding, and with it, cooperation and prosperity.

Fundamental to GPF’s inter-religious efforts is the process of  discovering shared commitments to universal principles and  values. The growing network of religious and spiritual leaders  are working together based on a common platform of ideals  and setting critical precedents of character while harnessing  the innovation and resources to create lasting solutions.