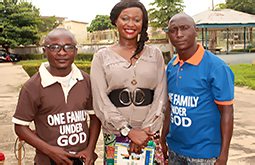 A retreat participant holds up a sign in support of the “One Family Under God” campaign.

Last week, the second of the Interreligious Youth Leadership Retreats series organized by the Global Peace Foundation – Nigeria was held in Northern Kaduna. The initiative is drawing significant partners together in this effort to ease religious tensions in the region, like H.E. Hajiya Amina Namadi Sambo, wife of the Vice-President of Nigeria. The timely retreat gained media attention as an effort that has implications that reach beyond religious relations, into national cohesion, economic development and political stability. The following article covering the retreat is written by Midat Joseph and published in Nigerian news outlet Leadership 19-Jul-2014 |

‘Too Much Emphasis on Religion Destroying North’

by: Midat Joseph The Global Peace Foundation, an international organisation committed to peace building in the world, yesterday blamed the backwardness in Northern Nigeria on too much emphasis on politics of religion. Speaking yesterday at a 2-day sensitization programme on religious tolerance in the North, entitled “One Family Under One God”, the northern coordinator of the group, Rev Joseph Hayab noted that ethnic and religious sentiments have become the bane of progress of the region. 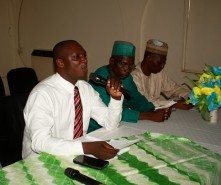 Rev. Joseph Hayab, “We should learn to stay together and co-exist peacefully with one another because we cannot do without one another.”

“The economy, social and political status of our region are crumbling because we allow religious and ethnic sentiments to divide us while other parts of the country are progressing despite their religious differences,” Hayab said. The Foundation which cautioned Northern Muslim and Christian youths to avoid fomenting violence in the region under the guise of religion, said no religion is a ticket to causing crisis. Rev Hayab, who is also the special adviser on religion (Christian matters) to the Kaduna State governor, Mukhtar Ramalan Yero, cautioned the people of the North against using religion to divide themselves. He said, “We should learn to stay together and co-exist peacefully with one another because we cannot do without one another”.

“We should learn to stay together and co-exist peacefully with one another because we cannot do without one another”.

Also speaking at the occasion, special adviser to Governor Yero on Islamic religion, Sheikh Abdullahi Maraya traced the origin of human existence, noting that all human beings are offshoots of Adam and Eve in the Biblical Garden of Eden. Sheikh Maraya, therefore, said that for one to kill another person in the name of religious crisis means killing one’s brother or sister because of the common origin of people all over the world. He said, “In this part of the country, we are retrogressing on daily basis because of internal clash out of religious sentiments, we are faced with unnecessary violence in Kaduna State, but we are all children ofAdam and Eve. If a Muslim is killed, we have lost a member of our distinct family, if a Christian is killed, we have lost a member of our distinct family, and even if a pagan is killed, we have also lost a member of our distinct family. “So we must shun violence and work together as brothers and sisters despite our religious and tribal differences. We can take example from the people in Southern part of the country, they happily stay together, religion never cause problem for them, they inter marry joyfully, Muslim marrying Christian, Christian marrying Muslim, nobody fight over religion. “Today, the southern part of the country is progressing educationally, socially and otherwise, while in the North we are lagging behind in every aspect of development because of destructions and violence in the region”. Meanwhile, the country Director of the Foundation, John Oko told newsmen in an interview shortly after the opening ceremony of the event that this was the second leg of the occasion in Kaduna Central Senatorial zone, with first leg in Southern Kaduna senatorial district some months ago. Oko said the essence of the campaign against violence in the country was to compliment the efforts of government at all levels in finding solutions to crisis of various nature in the country. 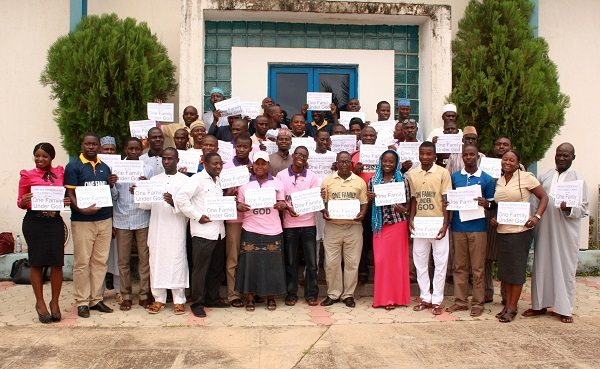 For a FULL ALBUM of the retreat visit: http://www.globalpeace.org/new-photo-galleries/2nd-interfaith-youth-leaders-retreat-kaduna-central