Free and Unified Korea Framework: Options for the New U.S. Administration and the U.S.-ROK Alliance

“The time is ripe for fresh strategic thinking. A unified Korea, aligned with fundamental freedoms and human rights, should become the clearly stated and actively pursued policy of the U.S., South Korea, their allies and the U.N.” – Dr. Hyun Jin P. Moon

WASHINGTON and SEOUL—Legislators from both sides of the aisle in the U.S. Congress and South Korea’s National Assembly together with Korea policy experts explored critical issues and prospects for a fresh start to US-Korea policy under the new Biden administration at an online forum convened concurrently in Washington D.C. (February 24) and Seoul (February 25).

One focal point for the discussion was President Joseph Biden’s remarks last October during the U.S. presidential campaign to the Korean news agency Yonhap. In them, he affirmed his objective to “keep pressing toward a denuclearized North Korea and a unified Korean peninsula, while working to reunite Korean-Americans separated from loved ones in North Korea for decades.”

Congressman and Majority Deputy Whip GK Butterfield stated, “With a new U.S. administration reaching out once again to strengthen our bedrock alliance with the Republic of Korea, I would like to join with you in affirming strong support for the founding ideals of the Korean independence movement for one free and indivisible Korea.”

Noting that both her parents were from North Korea and were unsuccessful in attempts to reunite with relatives left in North Korea, Rep. Steel said, “It’s not fair to exclude [visitation of] family members because they are Korean American.” She is co-sponsoring legislation together with Rep. Young Kim and Rep. Grace Meng (D-NY) that would include Korean American families in any family reunification initiatives.

Prominent ROK National Assembly members from both political parties, including Hon. Young-Kyo Seo and Hon. Taeyong Cho, expressed support for reunification based on principles and values that strengthen the U.S-ROK alliance.  Assemblyman Cho welcomed the new U.S. administration and said that President Biden “values the US-ROK alliance, will restore trust between two nations, and pursue unification of the Korean peninsula.”

Leading officials from the Clinton and Bush administrations, as well as Korean policy and grassroots leaders, saw significant opportunities with the new U.S. administration for progress in U.S.- ROK relations and a reset in approaches to the threat posed by the North Korean regime. 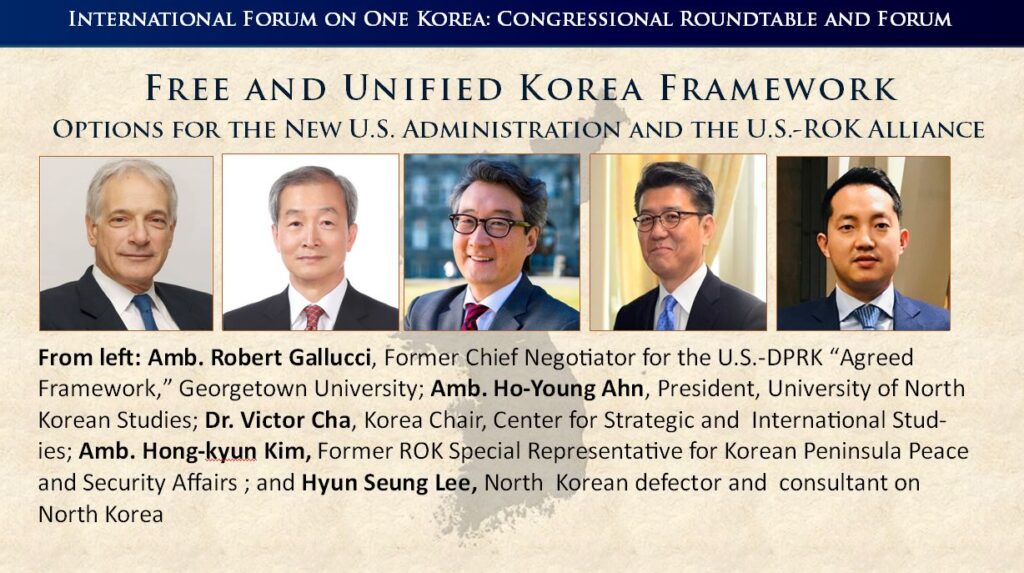 Policy experts urged a reset in U.S. relations with North Korea and the ROK with the new U.S. administration.

Dr. Hyun Jin P Moon, Global Peace Foundation chairman and author of Korean Dream: Vision for a Unified Korea, stressed the need for a comprehensive strategic approach focused on the end goal of a free and unified Korea, backed by the growing movement for reunification in South Korea and a global civic campaign to build international support. He called for Koreans to draw upon the shared values and culture in their history that long predate the current division.

He urged that “A unified Korea, aligned with fundamental freedoms and human rights, should become the clearly stated and actively pursued policy of the U.S., South Korea, their allies and the UN. This would provide a clear end goal for Korea policy and a framework for all negotiations with the North. Focus on this end goal naturally requires a comprehensive approach that no longer compartmentalizes the nuclear issue from other issues such as human rights, governance concerns and economic development.”

Dr. Edwin Feulner, founder of the Heritage Foundation, underscored the need to reaffirm the US-ROK alliance, and stressed the essential role of a vibrant civil society in building a free and united Korea, calling it our destiny to work together, on both sides of the Pacific, toward this goal.

The forum was co-convened by the Global Peace Foundation, One Korea Foundation, and Alliance for Korea United USA, with partner support in Seoul by Action for Korea United, a coalition of more than 900 civil society organizations advancing peaceful Korean reunification.

The original post appears on Global Peace Foundation. Global Peace Foundation is an international non-sectarian, non-partisan, nonprofit organization, which promotes an innovative, values-based approach to peacebuilding, guided by the vision of One Family under God. GPF engages and organizes a global network of public and private-sector partners who develop community, national, and regional peace building models as the foundation for ethical and cohesive societies. Dr. Hyun Jin Preston Moon is founder and chairman of the Global Peace Foundation.