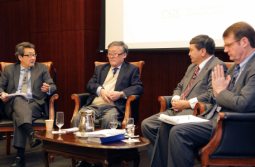 A forum co-hosted by the Global Peace Foundation and the Center for Strategic and International Studies examined Mongolia’s possible role in cultivating relations on the Korean peninsula. Dr. Victor Cha, the Korea Chair at CSIS, said, “We don’t usually think of Mongolia in the context of peninsular diplomacy.”  Yet, Dr. Cha added, diplomatic attempts through the Six-Party talks have begun to sound like the same record, playing over the same issues without progress. In light of indicators like the speech made by President Elbegdorj of Mongolia at Kim Il Sung University last October promoting fundamental human rights and freedoms, Dr. Cha expressed that perhaps it is timely to explore the potential of Mongolian engagement.

The forum  on “Mongolia’s Diplomacy with the Two Koreas” on December 3 drew experts from the United States and Mongolia, including the current Ambassador of Mongolia to the United States, Ambassador Bulgaa Altengerel, Dr. Tsedendamba Batbayar from the Ministry of Foreign Affairs of Mongolia and Ambassador Mark C. Minton, President of The Korea Society. Dr. Cha moderated the proceedings.

The Global Peace Foundation has been a long-time advocate for the inclusion of Mongolia as an essential player in securing Northeast Asian Peace, particularly the with the situation on the Korean peninsula. In the summer of 2011, prior to the Global Peace Convention held at the end of the year in Seoul that focused on issue of Korean unification, Dr. Moon visited Mongolia for a Global Peace Leadership Conference and the celebration of the Hun people.

In his opening remarks Dr. Moon made a case for Mongolia’s involvement:

Mongolia’s role is crucial. Unlike the participants of the Six Party Talks which have been polarized with vested historic, ideological, and strategic interests, Mongolia is a friend to all those participants with no vested interests besides the desire to broker good will, dialogue and cooperation. In addition, it has diplomatic relations and open contacts with both Koreas. Thus, given the current impasse and possibility of future disagreements down the road, Mongolia can play a unique role that countries like the United States, Japan, China and Russia could not fulfill. It is well-suited for an emerging role in developing innovative initiatives and best practices for reconciliation and development in the region, because of its historical background and geopolitical position as well as its own recent experiences.

The Mongolian people have a rich and proud history, a strong spiritual heritage, and deep family traditions. Mongolia is now poised to play a unique role as a leader for global peace.”

Ambassador Altengerel mentioned regional peacemaking efforts spearheaded by Mongolia such as the Mongolian president’s Ulaanbaatar Dialogue on Northeast Asian Security, a diplomatic initiative that pulls scholars and researchers together, and a conference on regional security was held last June in the Mongolian capital on the theme “Energy, Infrastructure, and Regional Connectivity.”

The forums are a series co-organized by the Global Peace Foundation and the Center for Strategic and International Studies. The next one is scheduled for February examining the impact of humanitarian aid in North-South Korean relations.