Dr. Moon Calls for Interreligious Cooperation Based on Shared Principles and Values 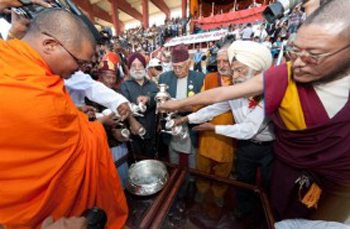 Religious leaders participate in the water ceremony during the Global Peace Festival in Nepal.

Religious leaders hold the key to resolving the root problems of humanity.  However, as 9/11 and other religious based conflict around the world show, without interreligious cooperation, this key cannot be manifested.

The following is an excerpt from an interview with DongA Daily Newspaper in Korea on Dr. Moon’s perspective on interreligious cooperation.

In my interfaith work, I have found that there is a lot in common with what what people of faith affirm, whether you are Christian, Muslim, Jewish, Buddhist, Shinto, Hindu, etc.,  because it is inspired by God. What deals with theology, doctrine and dogma, may be different. However, values and principles: what we aspire for, how we strive to live our lives, how we define spiritual maturity, much of this is shared.

The best way to explain it is through delineating the difference between spiritual leaders and religious leaders. For spiritual leaders, universal aspirations, principles and values are important.

Mahatma Gandhi and Dr. Martin Luther King, Jr. were people of deep faith. But they came out of their religious boxes to do the type of work that they did.

Mahatma Gandhi led a national movement to liberate India from the British Commonwealth because he did not just represent the Hindus. The movement was made of many religious traditions: Hindus, Sheiks, Jains, Buddhists and Muslims. Gandhi aspired for something that transcended his religion.

Dr. Martin Luther King, Jr. led the Civil Rights Movement, because he did not just speak on behalf of the Southern Baptists.  His faith and his convictions  drove him to do go beyond his denomination.

What allowed those movements to form were basically universal values and principles.

The problem is that there have always been religious leaders who stay in their box and promote their own particular faith. They can’t make any civic impact. I’m challenging them to come out of their box to live for some greater purpose.