Dr. Moon Calls on Africa to Create New Models of Development Based on Universal Principles and Shared Values 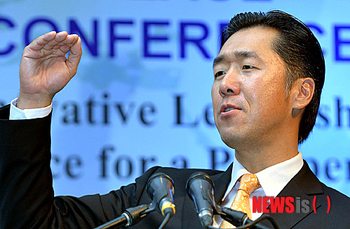 The following is Dr. Moon’s remarks at the close of the Global Peace Leadership Conference 2013 held at the Abuja Sheraton Hotel – Abuja, Nigeria. 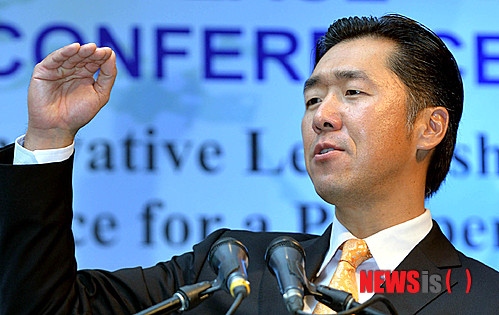 Dr. Moon addresses participants of the Global Peace Leadership Conference 2013 in Abuja, Nigeria. “Africans have not been overwhelmed by their challenges. They have the spirit, they have the sense of hope to build a brighter future for themselves, their families, for their future generations.” (Photo Credit: NewIs)

Thank you very much.  First of all, for all of the participants of this convention, both international and from here in Nigeria, please give yourself a round of applause. (Applause)

I know that the last two days have been a very hectic in schedule, because we wanted to make sure that as much could be brought out from this conference, because it is you, especially the leaders here in Nigeria that will need to carry the mantle forward to really bring about substantial change, in your communities in this great nation of Nigeria.

As I mentioned in my speech, the plenary, I believe that Africa is at a moment of transition.  You have reached a high pinnacle, and yet there are greater heights before you if you are willing to take on the challenge. And I am so moved by the very fact in meeting and speaking to the various leaders in this nation, that you are truly willing and ready to take that challenge.

When I mentioned that this is an exciting moment in the history of this continent, it is because it really is a break from the traditional relationship that this continent had with the developed world.  I believe that the developed world has lost its patina of  credibility over the last several years. With the breakdown of the financial system, with the lack of leadership on the global stage dealing with very real problems that are facing many, many people, millions of people around the world.  In this vacuum there is opportunity for new leadership to rise and set a new precedent.

Now, being someone from a developed country, I call America my home today, I know the potential of America, but at the same time I know the challenges within America.  When I come to a continent such as Africa, where all you have is your future ahead of you, and you can learn from the lessons of the nations that have charted the path of development before you.  You can pick and choose the path to your development.

This gives Africa and the developing world a tremendous bevy of opportunity to chart the path to their development, for their prosperity without having to sacrificing some of the more important things that many of the nations that came before you had to sacrifice for the sake of modernity.

Now as a Korean, I know this personally.  Yes, Korea, was at one point in its history, South Korea, was the poorest nation in the world after the Korean War. Yes, it was poorer than Nigeria.  Yet today,60 years later, it is the 12th largest economy in the world.  The Korean people reached those heights because they chose to be self-reliant.  They chose to determine their own future. In one sense they bought into the whole western model of development, even giving up some of their most cherished and most important parts of their culture and tradition. One of which is the Korean family.

I believe that the developing world, in Southeast Asia, in Latin America and in Africa, can learn from these lessons, so that they can chart a path for development that affects the lives, in a positive way, for all of their citizens, but at the same time, not lose something in the process. 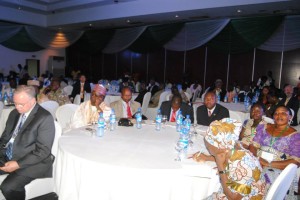 And I believe that through this vision of ‘One Family under God’ and the fact that we are touching upon these root issues that can bring about a peaceful, harmonious united  humanity, which is our spirituality, rooted in principles and values, in a common spiritual vision.  Now in the past many institutions, organizations, individuals and nations have tried to deal and tackle the issue of conflict and peace and corruptions and they have done it through political or diplomatic means or economic aid.  And they have done and followed that same paradigm over decades and decades and decades with the same results, without resolving any major conflict in any part of our globe.

Without really, sincerely dealing with the issue of peace and defining what that means and without rooting out corruption that plagues all nations around the world even in the developed world.

The reason why, I believe, is because we have failed to identify how to address those issues. Those issues fall in the realm of ethics, morality, sense of right or wrong that is tied to humanity’s spirituality.

But more importantly there is a common thread that exists in all of the faith traditions that articulates and identifies universal principles and values as the guiding compass of our daily lives. In other words faith traditions of people of faith have more in common than they do differences.  I would say that 80 % of what we believe, what we aspire to, and what we have in terms of a common ethic are identical. Maybe 10-20% in terms of our theology and doctrines might differ.  And yet it has been that 10-20% that has been the main reason why people of faith have never come together.

Well, GPF is offering another platform.  That we should come together on a common ground to deal with a common issue of our common humanity and that is to build ‘One Family under God.’  (Applause)

If you look at this panel today, we have a Muslim, we have a Methodist, we have a Jain, we have Christians, we have Hindu’s, we have white, black, American, African,  Korean. In other words, all those pretensions that we put aside because we recognize our common humanity, and our common destiny together through the vision of One Family Under God.

We can come together in agreement because we share common principles and values that can move the human family forward in building a world of peace. And that is the great contribution of this great work. It is tremendous honor for me to come to this nation of Nigeria, the largest nation on the continent. I was told, not by a Kenyan, but I was told, not by other Africans, I was told, by everyone outside of Africa, that if Nigeria moved, Africa will follow. (Applause)

Now, this is the first time I’ve come to Nigeria. And believe me, you showed me a lot. You know, many times I tell my staff, you know, I come to these nations and I never get to see the nation itself. Usually I’m stuck in this conference, I’m stuck in meetings, but actually, I value those meeting the most, as I‘ve met with the leaders of this nation. Because as I’ve said in my speech, I do not see the greatest value in its resources, although you have tremendous resources, you have tremendous potential. I see the true value of this nation in its people, in the potential of leaders that I can inspire. I hope to put a spark in them and enable them to dream big for this nation and for this great continent of Africa.

It is in those meeting that I saw, I told Bishop Sunday, you Africans, you guys joke so much, everything is a joke. But you have a tremendous sense of humor that is contagious. (applause)For someone who comes from outside this continent, because we see on CNN, Fox News, and on the media all the time, all the problems happening all the time. We see the pictures of starving children, of conflict zones where tremendous horrors have been conducted by one race or tribe to another, or one religion to another. And of course, we’re moved by that, and we’re concerned by that, but as I come to Nigeria, and I know this nation is facing challenges even today, when I come to this nation, you’d think the people might be depressed, or not full of spirit, yet the absolute opposite is the case. (Applause)

Africans have not been overwhelmed  by their challenges. They have the spirit, they have the sense of hope to build a brighter future for themselves, their families, for their future generations. That, that is the more precious than all the gold, oil or diamonds that are on this continent. That is what will allow African to lift itself from its challenges that will bring a bright future for their children and their children’s children.

There always has to be a first step. Today, look at today as that first step.

We are going to be making a pledge, and I want you to make this pledge in the signing of the Abuja declaration your own. Make this your own, own it. Make this your mission in life to make sure that there is a positive future for this nation of Nigeria and the continent of Africa. Become the leaders of transformational change. And believe me, God’s abundant blessing will shine and a new tomorrow shall begin.