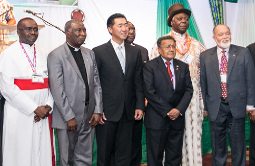 Interfaith leaders and Global Peace Foundation leaders at the pivotal Global Peace Leadership Conference in Abuja, Nigeria in 2013 to launch the One Family Under God campaign.

The article entitled, “Fanatics blamed for inter-faith conflicts” cited images of the Westgate Mall terrorist attacks on September 21, 2013 as a chilling reminder of the real and close threat of radicalism not just Africa, but around the world. 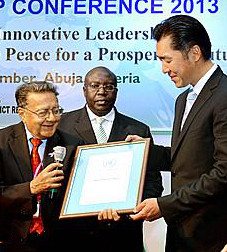 Dr. Manu Chandaria, CEO Comcraft Group and Special Advisor of GPF Africa presents Dr. Hyun Jin Moon, with the award conferred to the Global Peace Foundation Kenya in 2013 by the United Nations for effort with youth and peace.

Dr. Moon made a compelling case for religious cooperation centered on universal principles and values to counter divisive sectarianism. He observed that political and diplomatic approaches have been limited when confronting the complex and wide-spread nature of identity-based conflict.

“The threat of sectarian extremism will never be resolved by political or economic means alone. A true and lasting resolution must be rooted in faith, expressed through practical spirituality.”

Two emerging African models of such cooperation are in Kenya and Nigeria. Dr. Chandaria, Chairman of Global Peace Foundation Kenya and CEO of Comcraft Group described GPF’s work in Kenya. After the post-election violence in 2007-2009, GPF worked with the leadership of former President Mwai Kibaki and Prime Minsiter Raila Odinga to create national unity through volunteer and civic engagement and character education initiatives. GPF’s efforts have been credited for securing peaceful elections in 2013.

In Nigeria, the Global Peace Foundation is rallying with Christian pastors and Muslims Imams to push back against religious radicalism by promoting social cohesion based on the vision that all humanity, not matter their religion, nationality, race or culture is One Family Under God.

Standard Digital cited these two examples of practical expressions of spirituality that is bringing peace in a real way.

Read the report on www.globalpeace.org.