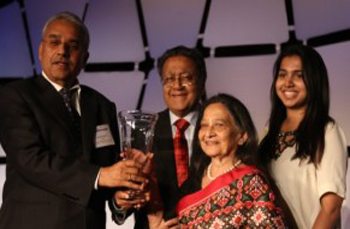 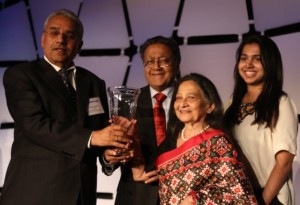 On December 1, at the close of the Global Peace Convention 2012, Dr. Manu Chandaria and his wife Mrs. Aruna Chandaria received the Exemplary and Innovative Philanthropy Global Peace Award for their substantial investment into social programs in Kenya and the greater East African Region.

Dr. and Mrs. Chandaria, have three children. Their granddaughter was present to witness the global forum recognize her grandparents’ outstanding achievement.

Dr. Chandaria is CEO of Comcraft Group, a multi-billion dollar enterprise that spans over 40 nations. In 2012, he was named one of Africa’s top twenty most influential businessmen by Forbes magazine, and has been referred to as Africa’s Bill Gates. He is Founding Chairman of the East African Business Council and Kenya Business Council, and regional chairman of the Global Peace Foundation in Africa.

His philanthropy has been recognized by Her Majesty Queen Elizabeth II, who conferred Dr. Chandaria with an OBE (Order of the British Empire)in 2003, and by His Excellency Mwai Kibaki, President of the Republic of Kenya who bestowed the Elder of the Burning Spear to Dr. Chandaria in 2007.

Sharing and Caring for the World 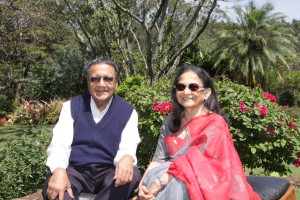 In an exclusive interview with Korean magazine the Joong Ang Monthly in 2010, Dr. Chandaria describes his family’s spiritual heritage influence on his philanthropy. “Jainism has taught me moderation through abstinence and vegetarianism. It guides me to live a life though union and unity within family.”  In contrast to their vast business empire, the Chandarias live modestly, and much of their personal wealth has been reinvested into developing the education, health and economic infrastructure of Africa.

Dr. and Mrs. Chandaria are also passionate peace builders. In the same interview, Dr. Chandaria continued, “We do not kill anything with our words or actions. We do not do anything that might inflict pain on others.” With the upcoming elections in Kenya, Dr. Chandaria has been an outspoken advocate for Kenyan unity.  In his interview with Capital Talk of K24TV Dr. Chandaria said, “This is our Kenya…We are not getting prosperity by dividing, we can do it by getting together.” He urged Kenyans to put their country before tribe. “First is Kenya, second is Kenya, third is Kenya, fourth, fifth is Kenya, then finally sixth, you can be your tribe.”

Dr. Chandaria was key in bringing together the Global Peace Foundation, Brand Kenya, UNDP and others partners like the Kenyan Ministry of Education, to host the first ever Kenyan National Youth Summit in January 2013. According to the Standard Digital, 2,000 youth from 47 counties attended, and were encouraged to be “Peace Ambassadors” during the upcoming elections, as well as bold and innovative entrepreneurs for Kenyan development.

Today Dr. and Mrs. Chandaria’s work for peace extends beyond Kenya. To the leaders at the Global Peace Convention he said, “I call on leaders to spread the message of tolerance, peace and innovative leadership to the whole world.” 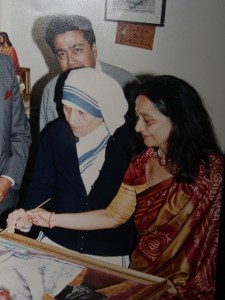 In their house, Dr. and Mrs. Chandaria have a painting of Mother Teresa, a treasured family friend. The relationship began after one of their daughters volunteered at the reverend mother’s mission. Later she paid a surprise visit to the Chandaria house. The friendship continued to grow and Dr. and Mrs. Chandaria became major supporters of Mother Teresa’s work. In his interview with the Joong Ang Monthly, Dr. Chandaria recalled, “Of all the times she visited, she never had even a cup of water. When we offered, she always said she would eat later with her sisters.”

Mahatma Gandhi has also had significant influence on Dr. Chandaria. When Dr. Chandaria attended university in India, Gandhi’s non-violence movement to free India from British rule was at its height. Dr. Chandaria described to the Joong Ang Monthly how during the protest against the British monopoly on the clothing industry, he minimized his wardrobe and even tried sewing his own clothes. Dr. Chandaria continues to honor Ghandi’s teaching that people are not owners of wealth but trustees asked to manage wealth.

Another recent accomplishment for Dr. Chandaria is the launch of the East African Peace Volunteer Corps in 2012. At its inauguration, Dr. Chandaria said, “Once you are a volunteer, volunteerism will live with you for life.”  According to Dr. Chandaria, who urged members of the Kenyan government to increase volunteer opportunities, particularly for youth, volunteerism is the “basis of our happiness.”

“Once you are a volunteer, volunteerism will live with you for life.” He also connected volunteerism to development and peace. He explained, “When we change the mindset from one of what is in it for me, to one of service” citizens are empowered to “take action for peace and development.”

According to Dr. Chandaria, “Volunteerism has no limit”. He described simple acts of service that could lead to community transformation: two million youth planting twelve trees a year could restore a forest, a handful health volunteers trained to make house visits could meet the community’s health needs, and if peace is brought into every community discussion peace could become a core value of Kenya.

The personal example of Dr. Chandaria and Mrs. Aruna Chandaria demonstrates the power of volunteerism.  Through the Chandaria Foundation alone they have funded the Chandaria Emergency Center in Nairobi, the Pandya Memorial Hospital in Mombasa, and the Chandaria School of Business at United States International University. Last year they donated $1,6 million to upgrade the intensive care unit of Gertrude’s Children’s Hospital in Nairobi.  After the post-election violence tore through the Rift Valley, they rebuilt two schools in Mutate and Sasamua, under one condition, that the schools educate children of all tribes. This does not mention the numerous university scholarships, grassroots development projects and health initiatives that they have invested in. 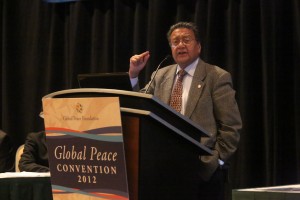 Dr. Chandaria is not just a philanthropist and peace builder, he is a skilled businessman. Yet, he is not unfamiliar with the challenges of poverty and the passion, vision and cooperation needed for success. In an interview with the Hindustan Times, he jokes, while he was not “born with a silver spoon in his mouth, there were at least spoons in the house”. His father emigrated from Gujarat, India in the early 1900s, one of many laborers who came from India to lay tracks for a railroad that would connect Mombasa to Nairobi. Dr. Chandaria spent his childhood in a cramped room with three families on Biashara Street in Nairobi.

Eventually Dr. Chandaria’s father quit and began his own wholesale supply shop. At the time, Indians faced heavy discrimination. They were limited to where and what businesses they could enter. But that did not deter Dr. Chandaria’s father. He eventually joined a group of Indians brought together by Dr. Chandaria’s future in-laws, the Shahs,  to buy Kenya Aluminum, a saucepan manufacturer, from bankruptcy. Despite multiple setbacks, limited markets and the group’s eventual disbandment, the small company grew.

At a Kenya Association of Investment Groups meeting in 2009, Dr. Chandaria discussed how their family overcame challenges and grew. “We would work together as a family to build the business.” Today Comcraft is as much a family run business as it is professional.

Dr. Chandaria described the strength of the family business model. “Coming together gives individuals and the business capacity to fight, especially when things are going wrong.” The family model has “a leader who presents a vision to the team and everyone has to be willing to follow them.” The success of many Asian businesses in Kenya has been attributed to the family model that strengthens shared interests and provides access to inexpensive capital. This contrasts more “western” models where individuals form investment groups and partnerships to collect capital for larger projects, which are often stalled by conflicting interests.

“One of our principles, right from the beginning, is looking out for the community we live in.”

What has made Comcraft a success is not just its excellent products, but also its values and principles. In Kenya, the Chandaria name is synonymous to corporate social responsibility and philanthropy. Social responsibility according to Dr. Chandaria is “both a moral obligation and a core business value.” Founded in 1954, the Chandaria Foundation is one of Kenya’s oldest foundations. Dr. Chandaria describes how he and his brother were inspired to establish the foundation. “Back in the 1950s we heard about the Rockefeller and Ford Foundations and what they were doing in America….we thought of starting the Chandaria Foundation.” To date, millions of the family’s earnings have been poured back into hospitals, schools, scholarships and development initiatives.

Dr. Chandaria’s commitment to service extends into his business development. He describes Kenyan development as something not exclusive to the nation, but tied to the region of East Africa and the continent of Africa. His simple perspective is, “How can we help everyone?” He is keenly aware of his responsibility as a businessman.  Businesses generate capital and development that creates jobs and future security for the children of Africa. As chairman of the East African Business Council and Kenya Private Sector Alliance, he encourages corporations to open avenues for transnational trade relations to increase investment and development throughout Africa, including the more rural areas of Southern Sudan and Ethiopia.

In addition, to social responsibility, a feature article by Business Daily Africa attributes Dr. Chandaria with virtues like hard work, discipline, and honesty. Even though he is in his 80s, Dr. Chandaria still works 16 hours a day.

Each Day is a Bonus

Dr. Chandaria is more than 80 years-old, but age has not slowed him down.  With the same core values that he applies in his life, he travels around the world to develop his business and work for peace. To K24TV he said, “Every day that passes, every day is a bonus.”

Every night before he goes to bed, he writes in his journal to “clean his slate” so he can greet the coming day with a fresh mind. Each day for him is a blessing as he seeks to “make the impact that is necessary.”