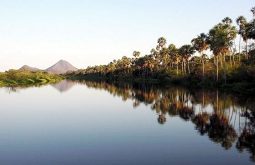 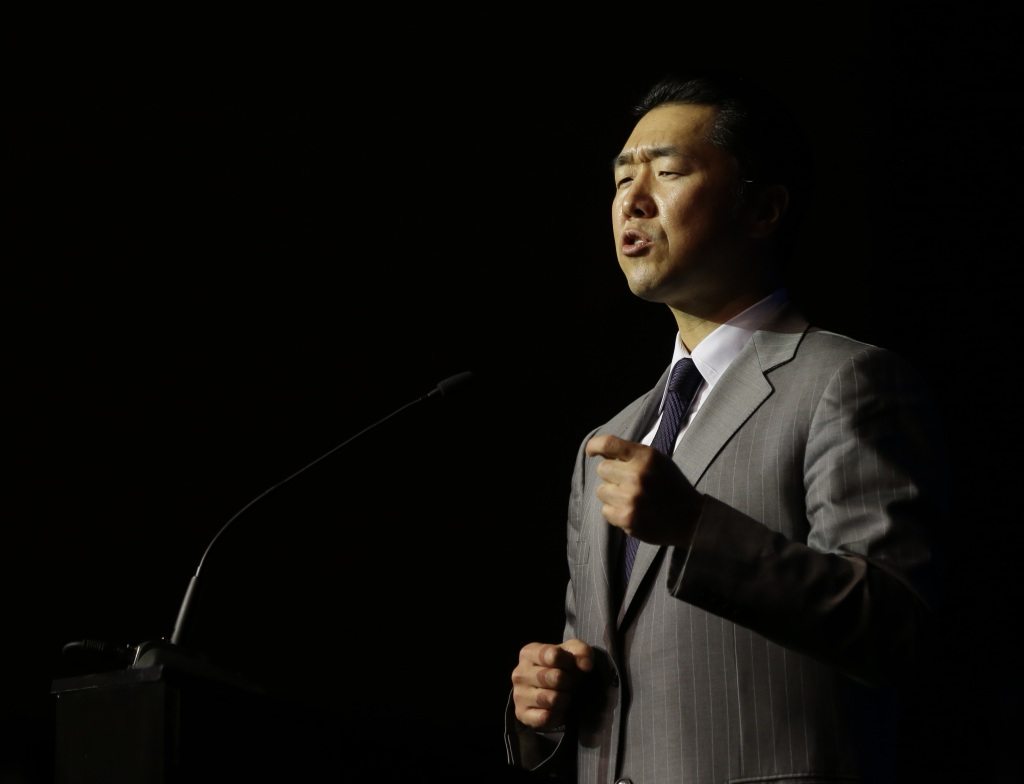 Dr. Hyun Jin Moon, founder of the Global Peace Foundation, delivers closing remarks, “Why Paraguay? Because I fell in love.”

I want to congratulate everyone for a successful conclusion of the sixth convention of the Global Peace Foundation – give yourself a round of applause.

Since President Jim Flynn went through the entire syllabus of the content of this conference and Thomas Field, the regional president, congratulated everyone who needs to be congratulated – I don’t know what I should say.

I‘m going to share a testimony of why this nation of Paraguay was chosen for this conference.

It was six years ago when I came into Paraguay that was in a crisis. And yet somehow during that time, that short visit that I was here, I saw what truly Paraguay embodied when I met their people.

I was moved by their earthy humility, their honesty and their spirit of hospitality. This character of the people was expressed in a real, palpable way.

I took the top youth of the country on a cattle drive, moving 250 cattle 150 km from one city to another, north in Alto Paraguay. Many of them, although they had lived here most of their lives, never visited that region. Some of them had land in that region but had never seen it. This was the first time for some of them to go there.

On that cattle drive, I remember every evening after working hard pushing cattle we would sit around the campfire and I asked them, “What is your dream?”

Many of them were western educated, studied in the United States, but they were frustrated that although they saw opportunity in the rest of the world somehow their nation was held back.

There around the campfire, with the youth of Paraguay, we talked about the future vision for Paraguay.

Most of all I shared with them the greatest dream of all, the dream that I have been sharing for many years, the dream to build one family under God.

But the most moving moment, one which could move the nation and stimulate a dream that resonated in their own hearts, was when we came to the town of Maria Auxiliadora. I still remember that to this day. The young people came to greet all these strange looking people in interesting attire who came into their town. 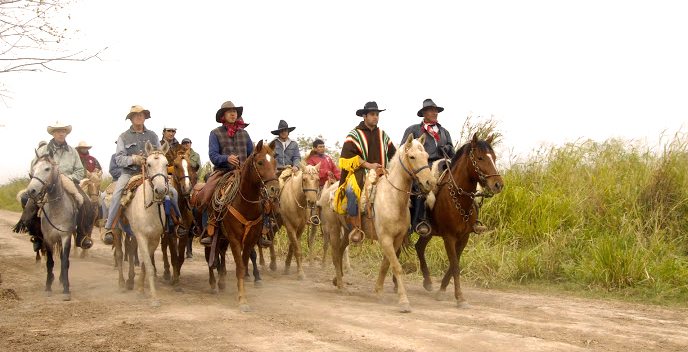 A cattle drive through the Chaco region in Alto Paraguay in 2008.

Upon seeing those children, because I am a father of many children as you know, I started to take my lunch and passing it out. There were candies in it; then I passed out my sandwich. And as I did that, the other people got off their horse and started passing their candy and sandwiches.

Just as a joke – growing up in the US we joke a lot – I said, “Since we gave you our lunch, can you feed us?” One of the mothers heard this and said, “Please come.”

Their house didn’t even have four walls; it had two. And around it, they had about four chickens walking around. That family slaughtered two chickens to feed us.

As we sat around that table with all the privileged young people of this nation, I looked in their eyes and said “It is amazing how those who have so little are willing to give so much. What are you willing to do for them in return?”

That’s when I fell in love with Paraguay. It’s not about the resources here – it’s about the people.

When someone in the public setting in the U.S. talks about God, it is an awkward thing. It is refreshing to come to a nation where it is expected for a public leader to give reference to God, and it is expected to recognize the importance of the family. 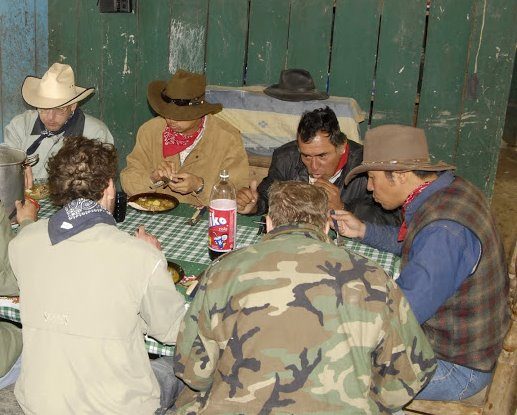 My wife touched upon the example of every Sunday where Paraguayans coming together with extended families to eat asado. What better way to deal with social problems than in that context?

My hope is that they can be truly the owners of the dream to build one family under God. That they can be owners of that dream that can uplift human dignity and fundamental freedoms. I hope, for the sake of those people, that the political and economic leaders can make the necessary transformation in their hearts that can bring about political and economic development that and can bring the burgeoning of economic and political transformation in the heart of Latin America.

I believe that this is the hub of an awakening of Latin American.

Jesus said that the meek shall inherit the earth. Those who are willing to live for the sake of others, and give to others, shall lead. 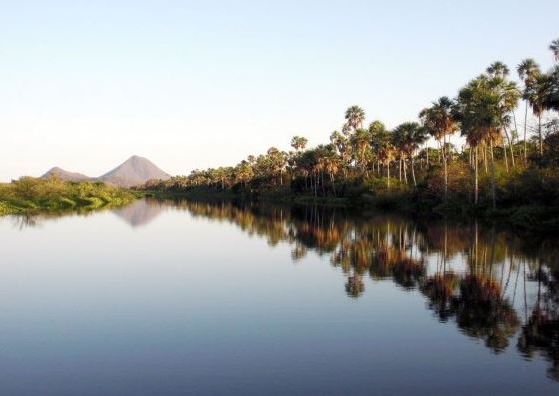 Alto Paraguay has a rich biodiversity ranging from the Pantanal to the Chaco.

When people say, why Paraguay – I say, “I fell in love with the people.” It has been a six year journey since I first came to today.

I want to give a round of applause to all the international participants. I had a chance to meet with many of them, and they told me some of them it took them four days to get here for a three-day conference. I believe that everyone who gathered here today from around the world; some who traveled four days to come to a conference, many people gathered in this room from the international contingency did just that –because they believe in this vision. They are the owners of this vision.

What happened here in Paraguay can happen anywhere else.

I mentioned in my speech; the first area that GPF focuses on was social activities. At the end of the day we are all people, you can talk about political and economic systems but what makes those systems work are people and people are moved by principles and values.

Social engagement led to that level of consciousness that led to political change. Now that there is a level of political stability, it has opened the door for economic development.

When nations engage in issues of transforming a nation in poverty, they do everything in reverse. They start with the economic, then interfere with political, then catch up to the social side as an afterthought. The GPF model has done the exact opposite – it started with the social side. The importance of civic and NGO engagement to create national transformation is critical. It starts with social engagement that builds reformation and transformation, building the foundation for economic development. 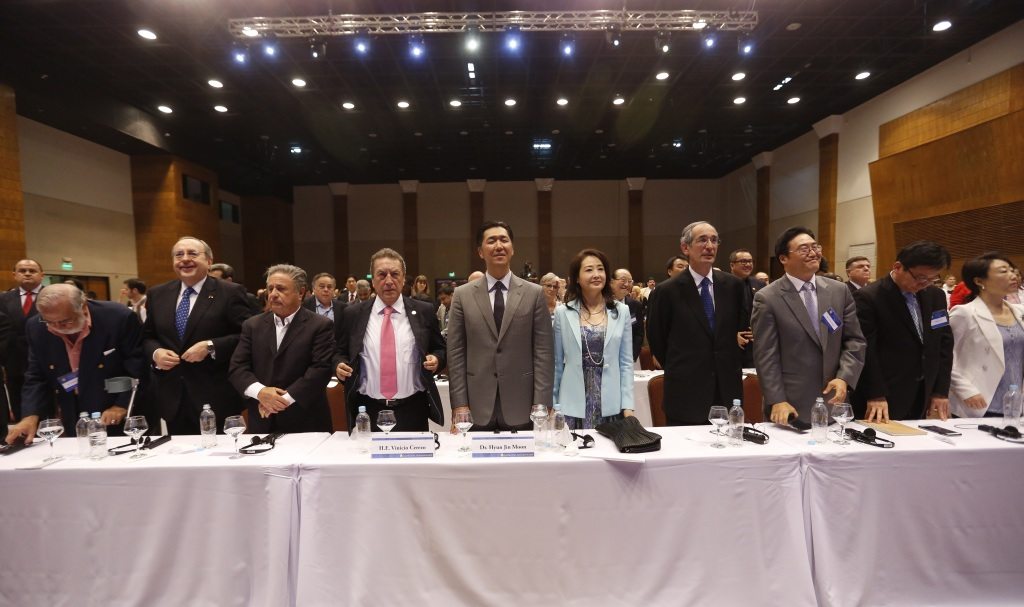 I hope this model can be looked at very objectively and can be studied. What I see happening in Paraguay can be a case study of how the developed world thinks of the development of the developing world.

To the leaders in Latin America, this is an amazing opportune time to really take ownership over the destiny not only of this nation but of this region. And I want to commend the work of the Latin American presidents because I know you are going to be the champions of all the core issue that have to be addressed to create a new continent that can offer the world clear models for development.

With that said – I want to thank all of you for your amazing commitment and ownership – and you’re desire and your heart to really serve our human family – to build the dream of one family under God.