Unification is a Historical Opportunity to Benefit Mankind 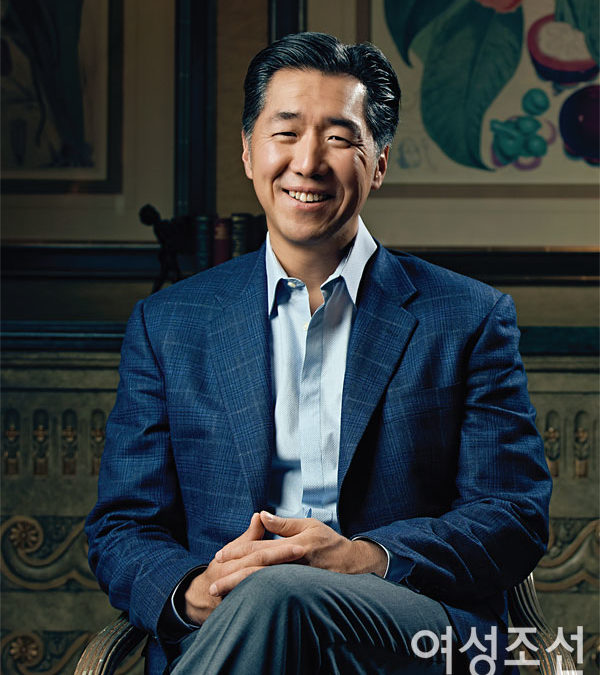 In an interview with Korean news outlet Women Chosun, Dr. Hyun Jin P. Moon called Korean citizens, especially Korea youth, “agents of unification” when framing a vision for a reunified peninsula. The vision is based on the ancient philosophy Hongik Ingan, meaning to benefit all humankind. Dr. Moon called on Korean youth to become leaders for a unified Korea, inheriting the spirit of Hongik Ingan to strengthen the entire peninsula with moral leadership and innovative ideas for one Korea.

Unification can be a historic opportunity to benefit mankind

August 15 is Liberation Day, which commemorates the day that brought an end to the 36 years of suffering under Japanese colonial rule. The 74th anniversary of Liberation Day this year is more meaningful than ever. This is because the mood for reconciliation between North and South Korea as well as between DPRK and the U.S. was established, along with a strong anti-Japanese sentiment among the citizenry. At this time of instability on the Korean Peninsula, I met with Chairman Hyun Jin Moon of the Global Peace Foundation.

On August 14, one day before Liberation Day, the Global Peace Foundation hosted the “2019 One Korea International Forum”. The forum convened over 400 foreign and international diplomats, unification and North Korean experts and civil society representatives to discuss the issue of unification of the Korean peninsula. Faced with the rapidly changing situation on the Korean peninsula, they have sought concrete solutions in issues ranging from civil society, economy, security, and human rights.

The Global Peace Foundation (GPF), is a non-governmental organization established in 2009 and headquartered in Washington, D.C. Established and directed by Dr. Hyun Jin Moon, the organization seeks to practically realize world peace based on universal principles and shared values. GPF holds a special consultative status to the UN Economic and Social Council (ECOSOC) and is a partner of the UN’s Department of Public Information (DPI).

On August 15, the day after the forum, we met with the Chairman Hyun Jin Moon at the Plaza Hotel in Jung-gu, Seoul. In spite of the rainy weather that day, many various groups were gathered from the plaza in front of the city hall to the Gwanghwamun Plaza. The chaos of the day mirrored that of the recent international situation surrounding the Korean peninsula.

Moon, who appeared in line with the appointment, seemed to be relaxed despite a tight schedule. He greeted the reporters in Korean, saying, “Nice to meet you.” But the interview was conducted in English with Dr. Moon answering questions in English with simultaneous translation into Korean. Moon explained, “It’s easier and more accurate to speak English as I have lived in America since I was four years old.”

An unstable present becomes the appropriate time for reunification

Question: This was the second forum of the year, following the March 1st commemorations. Why do we have forums every national holiday?

This year marks the 100th year since the March 1st Korean Independence Movement and a significant year. It is imperative for us to realize a unified Korea that inherits the spirit of independence activists of the March 1st Movement and Hongik Ingan ideal to “widely benefit all humanity”. The forum not only discussed the comprehensive framework of One Korea, but also discussed how to achieve unification under civic engagement.

Unification Angels is the world’s largest civil society organization that shares the vision and dreams of a unified Korea who collectively work to prepare for the era of Korean unification. Throughout history, the great moments of our nation have primarily been rooted in citizen-led initiatives. Unification must also begin this way. Today (August 15), we will hold an event focused on the Unification Angels. If yesterday was primarily a debate, discussion on reunification, and today will be a ‘1919 Unification Festival’, with more than 10,000 citizens determined to unify the Korean Peninsula for global peace and prosperity.

The forum promotes the idea that now is the right time for unification. It may be ironic, but this time of instability and uncertainty can become a catalyst for a great future transformation. The dream we have to dream here is the Korean Dream. The Korean Dream is the ideal of creating an ideal state that takes on the founding philosophy of Hongik Ingan: the mission to benefit the world through inter-Korean unification. It is the patriot’s calling to be the agent of creating a new tomorrow by realizing the Korean Dream. A unified Korea based on the Hongik Ingan spirit will benefit the entire world.

Q: Why should we unify?

I know that Koreans are pessimistic about unification. The reason for this is because citizens did not previously realize that they could be the agents for unification. Young people, in particular, oppose unification because of the high costs associated with it. Yet this is a misinformed idea. What is the situation in Korea right now? Does the current situation offer the young generation opportunities? Korea is one of the OECD member countries with the highest unemployment rate of 2030 households. This may become even worse in the future. The domestic market is saturated and the population is aging at a rapid pace. There are no resources. At this rate, Korea’s economy cannot develop any further.

On the other hand, South Korean problems can be solved by unification. The unification I speak of is not that South Korea absorbs North Korea. Unification is like two company merger. Since the two Koreas each has what the other needs to develop, there can be synergies created through unification. The Korean Dream is a movement that can transform Korea. Young people are calling Korea “Hell Joseon”. Why don’t you try to change a bad reality? I want young people to be agents of change rather than relying on the older generation or political leaders.

9 children, the secret of a happy family

Many may be surprised to know that Dr. Moon has nine children. it is surprising to have a healthy family but even beyond this, three out of nine children are studied at West Point, a prestigious US military academy. West Point has produced many politicians and entrepreneurs, including late President Eisenhower.

Q: Dr. Moon is now part of the older generation. Are you educating younger children to be agents of change?

The best education is not through your words but through your actions. If there is an event such as the One Korea International Forum, you should participate in it with your children. There you can naturally expose them to the idea that we have a duty and a mission to live for a greater purpose. The virtues most emphasized to children should be to sacrifice yourself for something of greater value. Self-sacrifice is a precious virtue. Who would be happier than someone who spends their mornings for something worthwhile every day or who pursues material things? I met many successful people, most of whom lived empty lives because they did not have a clear purpose in life. I want children to live a life of value. To do this, we need to recognize that we are spiritual, not material beings, and to find value through this idea.

Q: Three of your nine children are from the US Military Academy, West Point. What is your secret?

Character education. Success is not through knowledge, but through character. There is a way for a child to grow up with good moral character. (Laughter) Every child is a gift from Heaven. The home is the first school where we can teach love to children. Growing up in an environment with many brothers and sisters, a child can be trained to interact with people of various personalities and to cultivate his or her character. There is also research from Harvard University in the United States that backs up this kind of idea. The family you grow up in determines how you can be respected and loved in wider society. Across the world, I saw various traditional family models. Among them, I felt that traditional Korean extended family was the best system. Westerners also recognize the excellence of the Korean extended family system.

It’s not that all traditional Korean family systems are good. The family must be based on love, not simply hierarchical order. If the parent sacrifices for the child with love, the child naturally respects and follows the parent. Koreans who moved to the United States were able to succeed because of their strong family ties. There are large family systems in other countries, but there are differences. We have clear roles and responsibilities for each member of the family. Each family member devotes his or her self to make sacrifices for the whole. It is our traditional family system that teaches us these moral values.

Q: Lastly, what advice would you give to parents raising children?

The purpose of education is not knowledge. Knowledge is only a tool. There are many parents in Korea who want their children to study hard. It is not important to study hard at school, but there should be interest in what kind of character a child possesses. And parents must be the first to change. If you show principles and good values ​​instead of pursuing possessions, your child will imitate your parents and grow up to be a moral adult. Children who will be the leaders of a unified Korea that inherits the spirit of Hongik Ingan should be people who have moral character and do valuable work. That is why the role of parents is critical.