Strength in Unity: A Timeline of Songs for One Korea

It was mid-August 2017 and the situation on the Korean peninsula seemed to fluctuate from bad to worse. Tensions had spiked after North Korea announced that it was developing plans to send missiles to Guam in response to heated public statements from the United States and the ratification of new sanctions from the United Nations.

Amidst such news, the One Korea Global Campaign issued an announcement that reminded the global community that there are pathways to peace that go can beyond political wrangling. In a follow-up to the 2015 song “One Dream One Korea,” the August 15th release of the song “Korean Dream” engaged “a group of celebrated Korean and international musicians” to expand global awareness of the shared values and vision of one united Korea.

The One Korea Global Campaign origins

The One Korea Global Campaign aims to build popular support for Korean Unification through the Hallryu (Korean wave) platform, one of the most highly visible and influential pop culture phenomenon in our world today. With millions of fans across the globe, Hallryu can work to be a dynamic force for global peace. 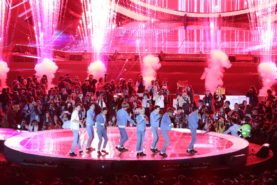 Launched as the One K Campaign in 2015, it released two powerful and groundbreaking songs: “One Dream, One Korea” by Kim Hyung-Suk and “One Dream” by Insooni at the first One K Concert held in the Seoul World Cup Stadium with over 40,000 attendees.

Alongside the flashing lights, Action for Korea United, a key coalition of over 900 civil society organizations working with the One Korea Global Campaign, worked to coordinate the launch of numerous grassroots educational campaigns to provide more in-depth education on the importance of reunification based on Korea’s founding principles and shared values. While each group is focused on their own particular areas of strength or interest, the AKU coalition is held together with the commitment to build a nation that can manifest the “Korean Dream” to “bring benefit for all humanity.”

The general approach of the coalition and campaign matches the strategy laid out in Dr. Moon’s book, Korean Dream: A Vision for a Unified Korea, of engaging ‘people power’ to chart a peaceful path towards a reunified nation, making inroads where diplomacy and politics cannot.

The One Korea Campaign Goes Global

In Korean Dream, Dr. Moon notes that Korean reunification should be led by Koreans but supported by the global community. Building on the successful launch in Korea, the One K Campaign took steps to expand its reach to a broader, English-speaking audience on Aug. 16, 2016 at the International Young Leaders Assembly’s Global Summit at the UN General Assembly Hall, and the One Korea Global Campaign was officially launched.

That December, the One Korea Global Campaign also held a press conference attended by a surprising trio of renowned artists, Peabo Bryson and composers Jimmy Jam and Terry Lewis, announcing a new song promoting reunification that will make an “impact beyond the charts” like Michael Jackson’s “We are the world.”

In an interview shortly after, the two-time Grammy Award winning Bryson, singer of Beauty and the Beast’s ‘Tale as Old As Time’ and Aladdin’s ‘A Whole New World,’ said of the song project, “If this goes anyway toward accomplishing [reunification], it will still be without a doubt the biggest accomplishment of my life.” He expressed his concern for humanitarian issues and said that Korean reunification is about having “hope for humanity”, drawing parallels to the American civil rights movement and Martin Luther King Jr.’s ‘I have a dream’ speech.

Debut at the Global Peace Convention 2017

In early 2017, promotions for a “One Korea Global Peace Concert in Manila” began in earnest with an enticing hint of the debut of the new One Korea Global Campaign song.

While primarly appealing to international fans of K-pop and the Korean Wave with headliner names like Shinee, PSY, B1A4, BTOB, AOA and CNBlue, the promotions also highlighted the important cause of Korean reunification as a major milestone towards global peace with the motto, “One Dream, One Korea, One World.”

Watch your favorite K-pop artists perform at the 2017 GLOBAL PEACE CONCERT ONE K IN MANILA on March 2, 2017, 7:00PM at Mall of Asia Arena! See PSY, SHINee, CN Blue, B1A4, B.A.P, BTOB and AOA as they sing their hit songs live!#OneKConcertInManila

At the Concert, Dr. Moon personally told the story of the divided Korean people to a cheering audience of 15,000 fans and challenged them to be the peacemakers that will make Korea one again. Jimmy Jam and Terry Lewis also came on stage to introduce the first debut of their long-awaited campaign song that would conclude the evening’s performances with all the artists together on stage .

Even while the 30-plus top Korean stars performed their most popular hits, the grand finale was undoubtedly the unveiling of the long-awaited “Korean Dream”. Many fans could be seen shedding tears and shouting for joy as their favorite stars joined Jimmy Jam and Terry Lewis on stage.

Release of the Korean Dream song

After the Concert, star-struck fans eagerly uploaded their recordings of the newest One K Global Campaign songs on the internet, only to find, to their disappointment, that the enthusiastic cheers from the crowd had had drowned out the audio of the much-anticipated song. When would the song be released to the public?

The One K Campaign chose the day commemorating Korea’s Independence, August 15th, to hold a showcase of the new song, “Korean Dream,” at the Ilchi Art Hall in Gangnam, Seoul.

Famed Korean-Australian singer Dami Im, Jung Dong-ha and Voisper performed the song live, this time in a quieter venue where the lyrics and full effect of the vocals could be heard clearly.

Shortly after the event concluded the song was released for purchase on Spotify, iTunes, Google Play and other platforms.

Following this, several of the featured singers released promotional videos giving a short personal invitation to purchase the song and promote the ongoing campaign.

On Sept. 1st, the full music video was released on the One K Campaign’s Youtube channel, featuring close-up shots of each artist and flashback scenes from all of the One K Campaign’s activities leading up to that point, including a solemn visit by Jimmy Jam and Terry Lewis to the DMZ.

Fans and stars alike, who had been waiting months for the song’s release, were enthused.

The “Korean Dream” lyrics express the still unfulfilled hope for a unified Korea and the potential of such a new nation to shine as an example of peace. As Dr. Moon has poignantly noted in the Korean Dream book, in order to see past seemingly insurmountable differences, division and conflict, a conversation is necessary to identify a common platform upon which Koreans in the North and South can rise up and claim as their shared identity. This is precisely what the Korean Dream lyrics allude to:

The “universal dream” to “serve the world as one family” refers to Korea’s historical 5,000-year-old ethic of “Hongik Ingan” or “living for the benefit of humanity.” This dream encompasses the whole of North and South Korea, and can be the basis upon which to build a new, unified Korea “where we all live in peace”.

The song’s bridge enlists the unified Korea in a new mission – to “join hands and heal the world” as “citizens of God’s creation.” This evokes the dream of Mr. Bryson, who envisioned writing lyrics that would invoke the spirit of Martin Luther King Jr’s “I Have a Dream” speech, which similarly called for the dignity and freedom of “all of God’s children,” going beyond the trending local issue to encompass a broader, universal cause.

A Unifying Vision to Serve the World

The theme of Korean reunification is not a new one. Koreans have always been – for the most part – conscious of the ideal of reunification because they understand that they are literally two halves of one Korean family.

Yet when it comes to the issue of unification itself, there has always the temptation to make Korean reunification about military, political or economic power, with winners on one side and losers on the other. This comes from the faulty notion that unification is about political, military and economic matters and the people should not worry about things “above their pay grade.”

It has always been part of the Korean identity that theirs was an aspiration to be a people that can serve all humanity. When this vision can be ingrained in the minds and hearts of the people, it renders all the political, economic and military aspects of the divided peninsula as mere details to be worked out.

There is some insight that long-time interfaith peace-builders can offer from their experience of working to resolve identity-based conflict. James Patton, president of the International Center for Religion and Diplomacy, shared in an interview with the Global Peace Foundation that successful peacebuilding efforts between disparate groups most often take root in the realm of values. “If I recognize in you something that I value… the connections start to deepen; and it comes away from the doctrinal differences.”

Korean Reunification as a Stepping-stone towards Global Peace

The work of the Global Peace Foundation and Action for Korea United have spearheaded opportunities for Koreans, both from the North and South, to put into practice the shared historical vision of Hongik Ingan, or, “living for the benefit of humanity”. It is in these shared experiences of service both to each other and to the world that the Korean people can begin to see beyond all the narratives of division and difference–and then to work together towards unification.

Hongik Ingan is a vision not just for the Korean people, but that looks outward beyond the nation for the inspiration and the good of all humanity. In Hongik Ingan, Asians can find a principle that supports human rights and freedoms and comes from an ancient civilization at the very heart of Asia.

In an editorial for the India-based Sunday Guardian, Dr. Moon writes, “a Korea unified on the foundation of its own ancient principles will finally leave behind its colonial past and bring to an end the last remnant of the Cold War in Asia.” Dr. Moon goes on to describe a “new Asian peace dynamic” free from any colonial legacy that will naturally expand to the world through the ethic of “broadly benefiting humanity.”

The One Korea Global Campaign aspires to serve as this kind of catalyst to awaken the Korean people, Asia and all the world to recognize that we have the power and responsibility to transform the world into that of which we dream.

This will remain one of my proudest moments in music, to be a small part of a global humanitarian effort for peace💕 https://t.co/VSanXeUYEi