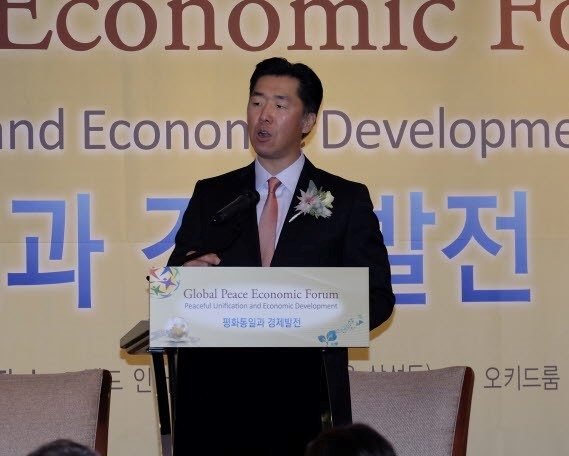 Yun Sŏng-pil of Sisa News = Since its founding, the Global Peace Foundation (GPF, global chairperson Hyun Jin Moon) has continuously engaged in civil-society led unification activities and economic policies in preparation for unification. This year, GPF has received the wholehearted support of the government, in light of Korea’s 70th anniversary of independence. This precedence is attracting keen interest, as the first time a civil society led movement for unification is developing an integrated civic, social, and political effort for economic policy that has been embraced by economic and government sectors.

At the forum, the need for changes in the economic framework connected to political democratization for successful unification was confirmed, improving the dated financial system in order to confront threats like slow growth and low inflation was also noted as the nation’s top priority.”

Kim Chin-pyo said in his congratulatory address, “The longer we continue to be divided, the greater our responsibility for reunification becomes.” He emphasized how important it is for North Korea to enter the global market through reform and openness secured by the economic and social development of North and South through civic participation.

Na Sŏng-rin said, “Peaceful reunification will be the most obvious breakthrough for the Korean economy, which is weakening in growth power and stuck in the mire of low birthrates and an aging population. Unification is also a way to secure peace in; the Northeast Asian region and the world.”

Hyun Jin Moon, GPF Chairman, delivered the keynote speech. He referenced nuclear developments in the North as an example of the Sunshine Policy sustaining and prolonging the life of the North Korea regime. He stressed the importance of generating agreement for a vision of a unified Korean peninsula, saying, “We must create consensus on what a unified future might bring as a Korean people and  drive the issue forward with the support of the international community.”

Furthermore, Moon said that despite a decreasing labor population, South Korea lacks the capacity to create jobs for the youth. He said a result of IMF involvement has been economic control given to a small minority resulting in ‘crony capitalism.’ He called for the creation of a financial environment in which more people can participate in ‘creating capital’ and increasing the growth scale.

Moon said, “In the future, as for Korea’s survival and growth, Korea’s finances will be in proportion to the growth of the international market,” and that, “financial organizations that receive the support of government policy funds must grab the opportunity to enlarge new markets and investments in the global market, using the greatest benefits of the financial market reform.” He suggested Paraguay as such a market of opportunity.

Kim Chu-hyŏn, a presenter, said, “The enormous cost of reunification itself could come as a burden,” but emphasized, “Reunification is actually an opportunity to stretch to the center of a new world economy with peace and stability.”

Kim gave the example of Germany’s reunification, saying, “Unification comes sooner than you think. The more you prepare for it, the better.” He promised, “The government will not withhold interest and support for civil-society led economic policy reform and research in preparing for reunification like those of GPF.” 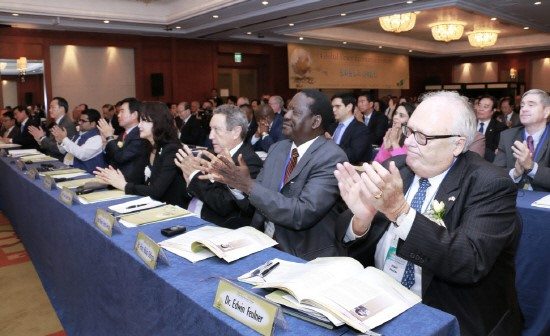 At the Intercontinental Hotel in Seoul’s Samsŏng-dong on the 8th, the Reunification Economics Forum that was held on the topic of “Peaceful Reunification and Economic Development” attended by reunification economics experts from all over the world.

* GPF, the Global Peace Foundation was founded by Hyun Jin Moon, third son of the Unification Church’s founder, the late Sun Myung Moon. It has 22 branches in countries around the world, and has continuously increased its reach since its founding in August 2009 during a conference held in Seoul. Its global headquarters is currently in Washington, D.C., United States. Its Korean headquarters is in Map’o in Seoul.

Based on its mission statement, “ One Family under God “ the Washington-based non-profit organization is promoting a unique approach to global peace through developing activities that includes inter-religious cooperation, supporting healthy families, and promoting a service culture.

Above is the unofficial English translation of the original article that appeared in Korean.