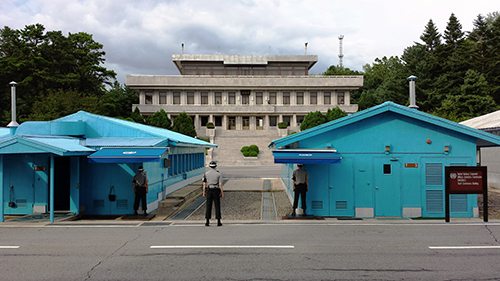 An uninhabited village on the western coast of the Korean peninsula lies squarely on the Demilitarized Zone. The Joint Security Area is located in this village, used until recently by the United Nations to host negotiations between North and South Korea. North and South soldiers stand-off in an uneasy staring match, epitomizing the longstanding stalemate. 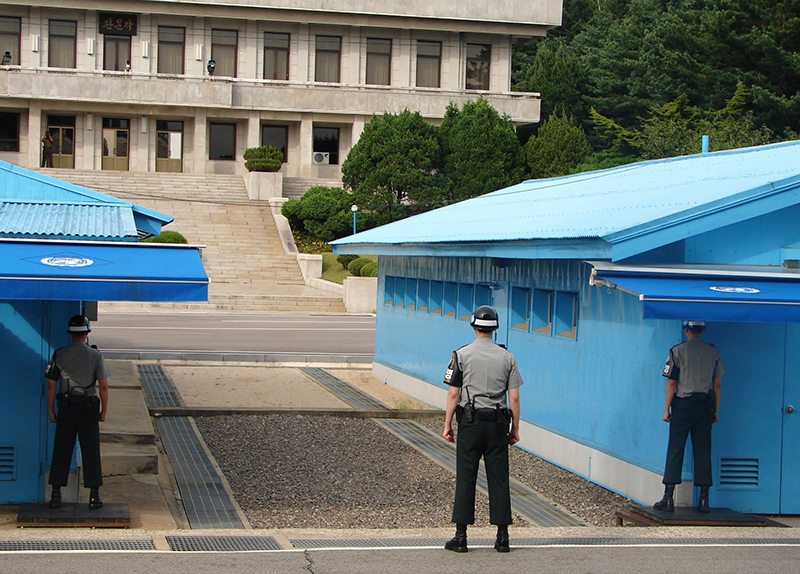 Panmunjeom is also a popular tourist site, being one of the only places where you can stare at a North Korean soldier and “step across” into the North.

One might anticipate feeling something different when crossing the border, just like the feeling one gets when disembarking at a foreign airport. But, surprisingly stepping across isn’t so different. When straddling across the DMZ on realizes that both sides are Korea, the people on both sides are literally of the same family. They share a common cultural heritage, language and thousands of years of history but have been torn apart by ideological differences.

Yet, the danger that lurks on either side of the line is real. Soldiers with machine guns stand on either side, daring the other to make the first move.

However, these borders are manmade. Across the border there is lots of exchange. The DMZ has become a wildlife preserve, where bears, goats, and bobcats roam across between the two Koreas. Birds fly overhead, defying the boundaries defended by watch towers, missiles and guns.

Human beings are the only creatures who create threatening boundaries to protect what they imagine to be their own and to keep “Others” out.

Perhaps there is something that can be learned from these animals that refuse to be contained by artificial boundaries. Perhaps its time to “tear down these walls” that have kept the greater Korean family from each other.