“One Family Under God” Bridges Castes in India 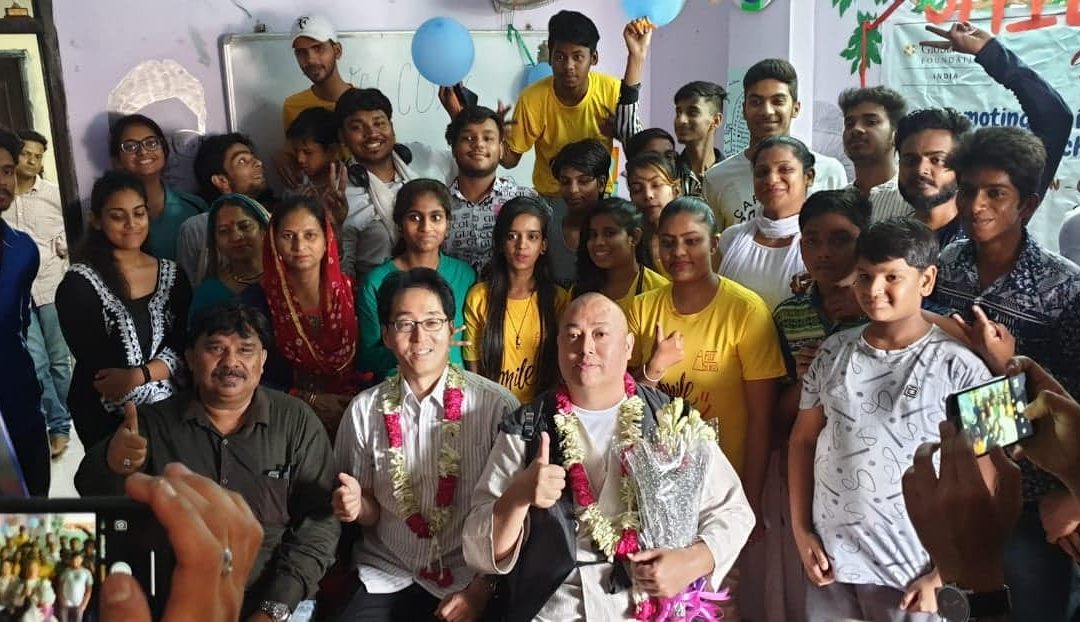 Global Peace Foundation has been building models of peacebuilding around the world, connecting people across race, nationality, religion and social divides to recognize shared values and invest in a future together. The “Smile” project in India is a developing model where youth in India are breaking past traditional identities of religion and caste in a program that helps them affirm their common humanity through storytelling, values, and character education.

The project is helping youth see each other as brothers and sisters, One Family Under God.

For the last few decades, there have been ongoing efforts to mitigate the historic inequalities faced by Indian people of lower castes. In 1949, the constitution banned caste-based discrimination and government-initiated affirmative action promised people of the scheduled castes (a socially disadvantaged group previously known as the untouchables) quotas in government jobs and educational institutions. With these efforts, scheduled castes have gained opportunities to lift themselves out of poverty and to improve their quality of life.

However, such development has yet to shift people’s perspective to abandon their caste identity and the conflict between castes remains an ongoing challenge. This limitation of the affirmative action is exemplified by the discontent of poorer members of the upper caste communities, who felt unrepresented by the current policy. This eventually led to the recent approval of a bill that opened up 10% of government jobs specifically for the poor members of the upper caste. This result concerns many as it can encourage people to group themselves more toward their caste identity. Further, such conflict has a risk to be utilized as a political tool. These problems suggest the need for an alternative approach in relieving caste conflict and to bring social cohesion among Indian communities.

This is why youth in the Balmiki community of Karol Bagh with the Global Peace Foundation (GPF) India have come together to initiate the “Smile” project. The program aims to transform the attitudes and behaviors of individuals surrounding caste by suggesting a new paradigm for peace and development using universal principles and values. This approach seeks to bring social cohesion among individuals with diverse backgrounds and promote development at both the person-to-person and societal levels. 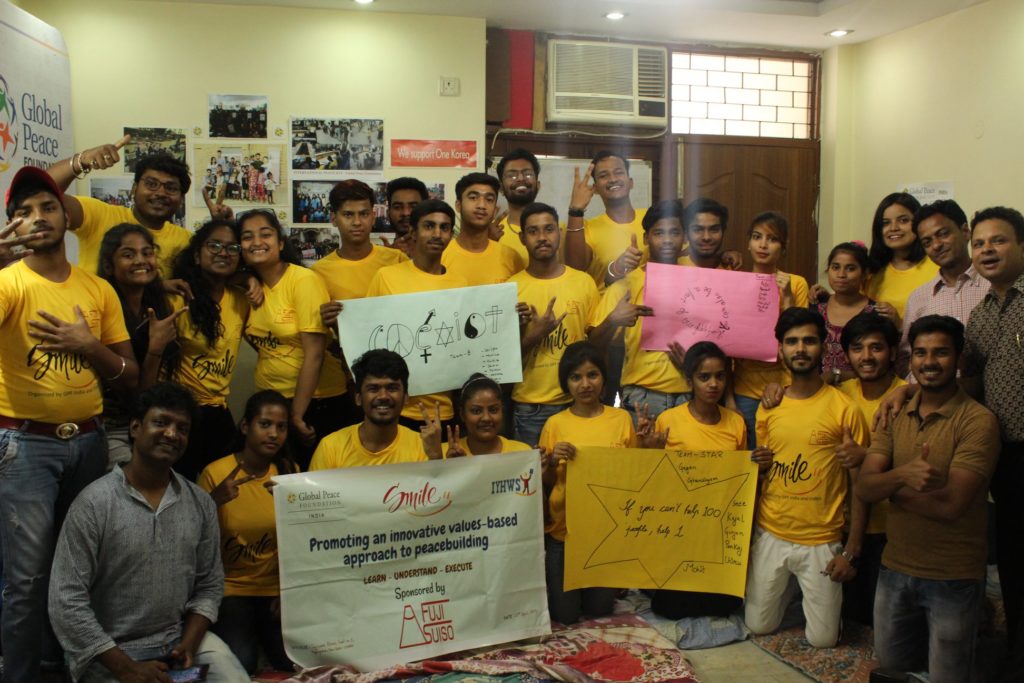 The Smile project brings youth from both high and low caste communities every week to provide values-based education and an opportunity to engage with people from diverse backgrounds. The content of the education is based on the vision of One Family Under God, rooted in the idea that all people are born as equal with intrinsic values, dignity, and fundamental rights. This vision communicates that we are all brothers and sisters of one human family, and it is in our benefit to work together to live in harmony. Such shared values suggest a new identity that replaces the current caste-based system and instead unite the Indian people.

In order to achieve this goal, the Smile project works to raise moral leaders who can exemplify the lifestyle of living for the greater good. As one of the core values of the project’s vision, participants believe that this is one of the fundamental values that drive people toward positive development.

“People and organizations that fight for themselves are bound to perish. However, if they have the motive of living for the greater good, they will prosper. Therefore, people are what matters in the end.” —Dr. Hyun Jin Moon, GPF Founder

Within our life, we face inevitable suffering caused by the unjust and immoral behaviors of others. Such an event always seems unfair and underserved and, as a victim, we feel justified to direct our resentment toward the perpetrator. However, recognizing that the perpetrators are also often the victims of unjust acts of the past, we can gain insights that can better direct our future attitude, actions, and goals. In our daily interactions with people, our choices, positive or negative, have a significant influence on others and vice versa. Together, through a sentiment of shared responsibility—oftentimes unfortunately instigated by different tragedies in the world—youth with the Smile project rediscovered the importance of living a life for the greater good. Only when each and every one of us partakes in such a lifestyle, can we eliminate the unnecessary suffering within our communities. With this renewed attitude towards life, participants were inspired to lead future discussions and efforts to eradicate inequality and work towards a society that can be beneficial to the people of India as a whole.

Our culture, traditions, religion, race, expertise, and talents are what makes us unique. However, overemphasizing these aspects can make us lose focus on finding our shared identity as one human family. In this regard, the Smile project includes sessions for participants to share their personal experiences. Through sharing their stories and vulnerabilities, participants were able to connect with one another. Such connection highlights our shared identity and promotes participants’ ability to build a relationship beyond their current caste-based identity and realize that they are, first and foremost, brothers and sisters who deserve respect and love. With this shared foundation, discussion of ideas becomes more fluent and can be directed to bring better solutions that prioritize the common good of Indian communities.

“We take part in debates where everyone gets a chance to speak. This helps us to know and understand each other better and gives us the advantage to work more efficiently in a group.” —Neha, 2019 Smile project participant 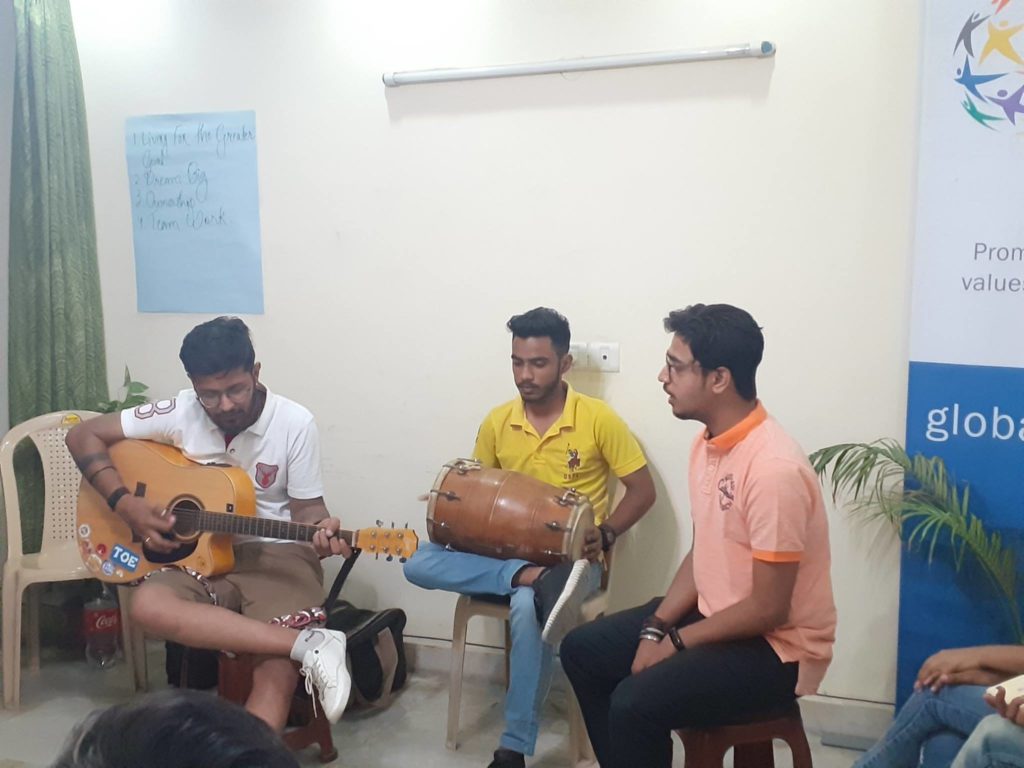 Every Saturday throughout the Smile program, participants gathered to practice for a play that would be performed in front of an audience of Karol Bagh. The powerful and emotional play depicted the inequality faced by a Dalit student who lost his scholarship due to caste discrimination, which eventually led to his death. This creative project was conducted to bring awareness and shift the perspective of people in the community. Recognized for its ability to touch the hearts of people across all barriers of race, class, language, and social standing, the arts are a profound method to spread a message to entire communities and society at large. Music classes were also conducted where volunteers developed their interest and ability to play musical instruments. After the play, some young audience members came forward and showed their interest in being part of future Smile programs.

“I liked the strategy of creating awareness among the community through the medium of music and play by which people started to recognize an issue, which can lead to a discussion of solutions.” – Rumit Walia, 2019 Smile project participant

English classes were provided for Smile participants throughout the week, helping them develop a proficiency in English, allowing them a voice to partake in all kinds of discussions. Such skills can equip them with the power to understand their peers, convey their own beliefs, and open doors for participants with different opportunities in the future. One participant, Gagan, was impressed by his own development saying, “Earlier, I wasn’t able to even form simple sentences. But now, I’m getting into the flow. I have seen much of improvement in my English.”

“I have learned many things from the Smile project. One of them is on my English skills where I see so much improvement. I learned how to make sentences and I can now read very well.” – Sarita, 2019 Smile project participant

This ongoing project takes place from April to July 2019 with the purpose to motivate people to move past their caste identity and bring them together as “One Family.”