‘Olympic option’: Winter Games could be a win for Korean unity 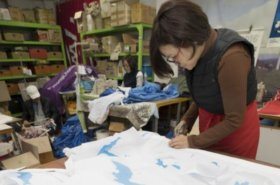 A worker in Seoul, South Korea, makes Korean unification flags, which depict a blue silhouette of the Korean Peninsula on a white background, at a sponsoring company of next month’s Pyeongchang Winter Olympics. Photo by Yonhap

Over the past few weeks, news from the Korean peninsula took a sharp turn from the “nuclear option” to the “Olympic option.”

As if someone in Pyongyang suddenly woke up and smelled the kimchi, the North began getting involved in what had been until quite recently basically a South-only event. The North will send 22 athletes to participate, who will march with the South under a flag with the outline of the united Korean territory. It will send an orchestra of 140 musicians. North Korean hockey players will join the existing South Korean team, to create a single “all Korea” team. Naturally, government figures, artists and other influential persons are going to attend.

Some see this as a co-opting of the 2018 Pyeongchang Olympics by the North, a last-minute insistence on sharing credit for what was almost solely the work of the South. Whether or not that is true, however, there is reason to welcome the new developments.

Historian and NGO leader Hyun Jin Preston Moon postulated a new view of Korean nationhood in his 2014 book Korean Dream. Critiquing the failures of both North and South, he calls for a unified Korean nation based on several core principles.

The process of nationhood must come from the aspirations of the Korean people, he argues, and it must be Korean-led. “The Korean people must take control of and shape our own national destiny,” he wrote, “through the unification process and lead our neighbors and the international community to support our efforts.”