Making the World an Inter-tribal House: A Native American Perspective 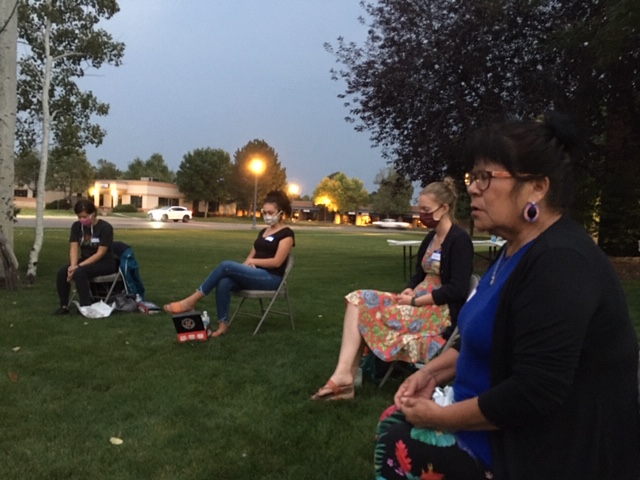 Two groups, Native and Non-native, are part of a unique project to build cohesion and a model of peaceful reconciliation in Montana, an American state that is home to seven Native American nations. The Cross-Community Reconciliation pilot program initiated by Global Peace Foundation incorporates powerful stories from native leaders who have experienced unimaginable trauma and transformed it into a method of healing for entire communities. GPF’s unique approach to peacebuilding starts with the affirmation that we are all one family under God, a vision that was incorporated throughout the program to accomplish dialogue and mutual understanding as a basis for reconciliation.

One member of the Crow Nation recently shared her story to a group of non-Native American Montanans. A survivor of the infamous boarding schools in which many native children were abused, she suffered domestic violence, sexual assault, and drug abuse before emerging from the darkness through a lifelong process of forgiveness. She now sees herself as an educator saying, “These experiences allowed me to see people as people.” While the room she addressed sat in stunned silence, her body language alone showcased her total openness and compassion to people who may have easily been descendants of her tormentors. Holding her arms open, she described her family of nine siblings and the people of all races and tribes that passed through her childhood home. She explained, “We had an inter-tribal house. People came from all over the world. It was a normal way of living to me.”

“We had an inter-tribal house.
People came from all over the world.
It was a normal way of living to me.”

This early exposure to diversity helped her judge people based on their good or evil actions rather than to judge them on their specific race or tribe. Instead, she developed a sense of gratitude for the blessings that the many different people of various backgrounds brought into her life.

Her own son is blonde-haired and blue-eyed: a product of two worlds. “I knew he would face so many challenges in his life. So, at first, I only taught him the Crow language.” She knew he would be challenged by his own tribe because of the way he looked. She also understood the importance of making sure he learned his identity and cultivated the virtues of perseverance and resilience.

As someone who has traveled the world several times over, she was constantly caught between the disparate cultures of the native and non-native world. Today, this has become her choice: “I go between worlds because I choose to.” From a young age, she knew she wanted to help mitigate racism and to build bridges between diverse groups. She uses her knowledge and culture to accomplish this, saying, “In the Crow language, how you talk is sacred. How you move, walk, talk, everything is connected. You have to be conscious of that.”

Being a peacebuilding leader requires deep compassion for humanity and respect for all people regardless of race, faith, or cultural traditions. In her culture, the Crow acknowledges the sacrifices of their ancestors to prepare for each descendant to come into the world. “People before me prayed for me so I could be here. I too pray for those that are yet to come, that they will be in a world that is better than the one we live in now.” This attitude and the idea that all people are connected not only across generations but across cultures is what binds humanity and allows reconciliation throughout painful histories.

“People before me prayed for me so I could be here.
I too pray for those that are yet to come, that they will
be in a world that is better than the one we live in now.”

“People sometimes ask me, ‘Why are you so kind?’ Why not? It’s like breathing. It’s so normal. It’s a way of life that you choose.” Her powerful words are desperately needed at this time. The common vision to become one global family can bring people together based on the values of mutual respect and compassion.

She left the group with a simple analogy of driftwood floating down a river. “We are all, each of us, flowing and finding our path and my hope is that we will find each other and hold on like driftwood. Because when each piece comes together, that structure becomes so strong, nothing can break it.”