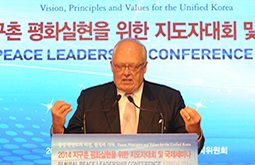 GPF Chairman say a clear vision of a unified Korea should be based upon the principles and values that have shaped Korean identity. 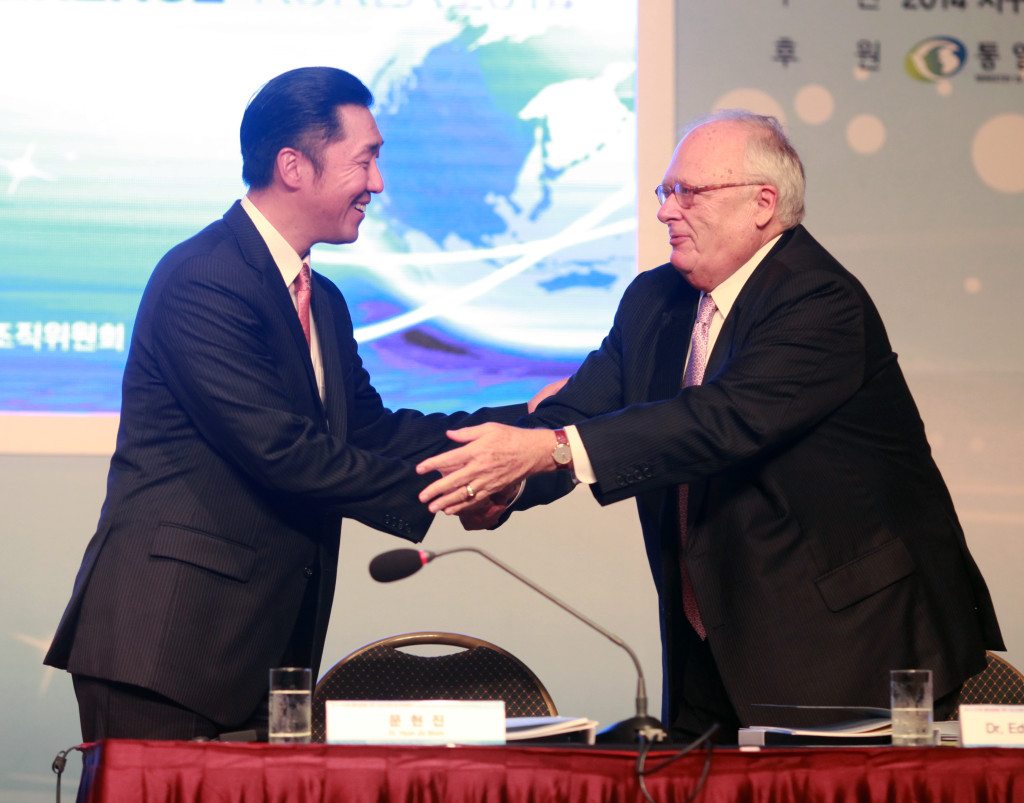 30-Sep-2014 |“In the three years since the Global Peace Foundation (GPF) held its annual convention here in Seoul, the landscape regarding Korean unification has changed dramatically,” GPF Chairman Dr. Hyun Jin Moon told an assembly of Korean political and religious leaders and international scholars in Seoul on September 30, 2014. “South Korean government policy is now to actively pursue peaceful unification by seeking to engage the North through a number of channels, [including] proposed infrastructure projects, as well as cultural exchanges with the North Korean people. In policy discussions within South Korea there is now much greater focus on the potential benefits that will flow from peaceful unification.” The GPF Chairman was addressing the 2014 Global Peace Leadership Conference (GPLC), “Vision, Principles, and Values of a Unified Korea,” the latest of several GPF-supported initiatives, including conferences, public education and humanitarian campaigns, and civil society partnerships, to elevate awareness and support for Korean unification. Dr. Victor Cha, Senior Adviser and Korea Chair at the Center for Strategic and International Studies in Washington, DC, gave an overview of the changing perspectives of unification since the division of the peninsula and the end of the Korean War and what he called “an important sea-change” in recent attitudes about unification. 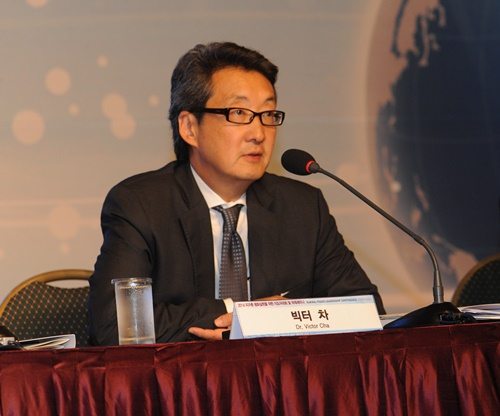 Dr. Victor Cha, Senior Adviser and Korea Chair at the Center for Strategic and International Studies, outlines the changing perspectives about Korean unification since the division at the conclusion of the Korean War.

Cha cited five distinct perspectives in the post-war era, beginning with a stark, Cold War-dominated view that saw unification only based on the eradication of the competing, irreconcilable political system. This ideological stance migrated, with the lessons of the integration of East and West Germany, into a “hard-landing” view of unification that dwelt on the enormous costs to the South of integrating the impoverished North. With the election of Kim Dae jung to the presidency and elevation of his Sunshine policy, a strategy of unconditional engagement with the North to moderate tensions and encourage economic development, the prospect of unification came to be viewed as remote and unrealistic, and relegated into the distant future. With the election of conservative Lee Myung-bak a more pragmatic view of unification emerged, with the government acknowledging that factors could precipitate a much more sudden change for which preparations should be made. South Korea’s current President, Park Geun-hye, has presented yet another view of unification, seeing it as an opportunity for growth, investment, and a “bonanza” or jackpot for Korea and her neighbors. Cha acknowledged that shifting attitudes are related to politics, but recent focus on the issue “is also motivated by a sober realization that the stability of the regime in the North is far from certain.” He also noted growing ties between South Korea and China. “South Korea is try to take advantage of this window and bring China more to its side. It wants to create greater equities for Beijing in its relations with Seoul than its relations with Pyongyang. And they believe the moment is now.” Heritage Foundation founder and Asian Studies Center Chairman Dr. Edwin J. Feulner presented a sobering assessment of any peaceful or gradual integration of the two Koreas. “Korean unification would require, quite simply, either fundamental political and economic reform by North Korea or the collapse of the regime,” he said. “Unfortunately, Kim Jong-un has clearly demonstrated that he will be as resistant to reform as his predecessors were.” 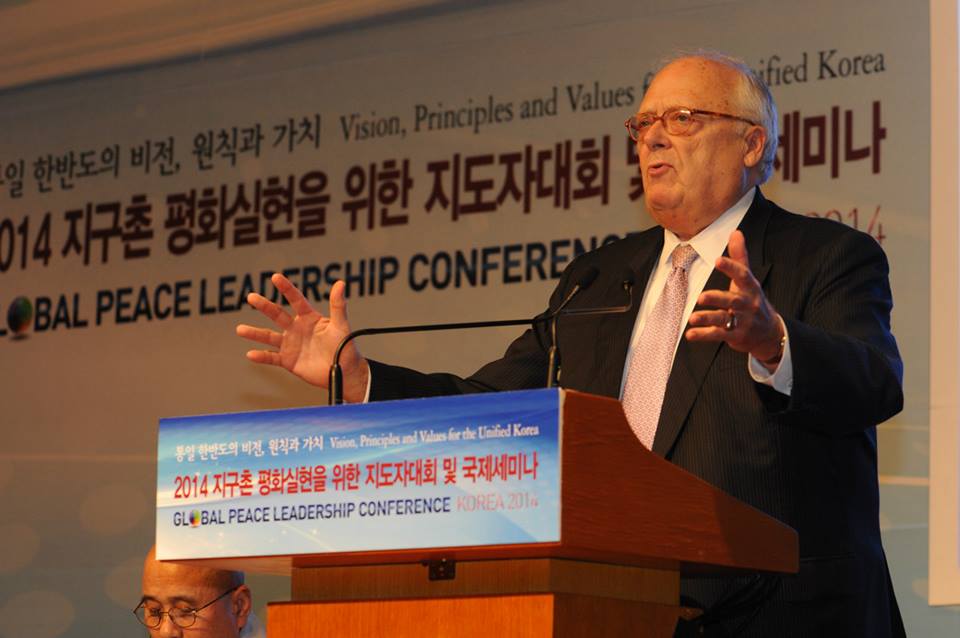 Heritage Foundation founder and Asian Studies Center Chairman Dr. Edwin J. Feulner: “Korean unification would require, quite simply, either fundamental political and economic reform by North Korea or the collapse of the regime.”

He also said that Pyongyang has displayed remarkable resilience to external pressure. “Regime change in the foreseeable future is unlikely due to the pervasiveness of North Korean security services, the lack of a viable opposition party or movement, and the state’s absolute control over information sources,” Feulner told the conference. Emphasizing the ongoing U.S. strategic commitment and Beijing’s complex balance of interests in avoiding a collapse of the North Korea regime, Feulner outlined steps the U.S. could take to assist the process of eventual unification, including:

Feulner also said that South Korea should reach out to North Korea through both bilateral and multilateral negotiations, but not acquiesce to North Korean pressure tactics. “Being excessively eager to compromise, as demonstrated by previous progressive administrations, not only rewards abhorrent behavior, but also undermines negotiating leverage. “President Park Geun-hye has provided a realistic blueprint for engaging North Korea,” he concluded. “In following these policies, Seoul should be resolute in its requirements of conditionality, reciprocity, and transparency from Pyongyang.”

“The principles of living for the benefit of all humanity and governing with morality and truth, and the spiritual consciousness they produced, became embedded in the Korean psyche and a part of our cultural heritage through the extended family tradition.”

In his keynote address, GPF Chairman Dr. Moon said that the focus of the conference—the vision, principles and values that can guide a unified Korea—“is an essential part of the preparation for unification, yet it has not been sufficiently discussed. “Unification will create a new nation, rich with new possibilities. What sort of nation should it be? What principles and what values should guide and sustain it? To grasp this opportunity we need to move forward with a clear vision of the future based upon the principles and values that have shaped Korean identity and defined Korea’s destiny.” Moon said the roots of Korean identity can be traced to Korea’s founding and the core principle of Hongik-Ingan with its exhortation to live for the “benefit of all humanity.” This ideal was to be implemented by governing the world with “morality and truth” (Ido-yeochi), thereby “enlightening the world with truth” (Kwangmyung-ise) and thus “creating a world of truth” (Jaesae-ihwa). 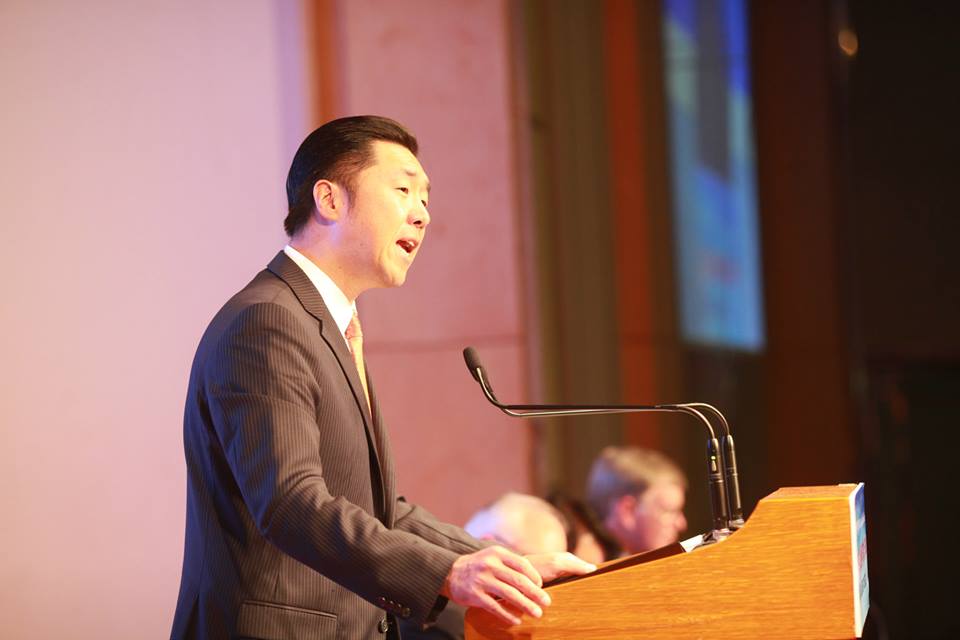 GPF Chairman Dr. Moon said that the focus of the conference was vision, principles and values that can guide a unified Korea.

“These principles and the spiritual consciousness they produced became embedded in the Korean psyche and a part of our cultural heritage through the extended family tradition,” the GPF Chairman said. “This is the foundation of an ethical society through which virtue is nurtured and passed on through the generations.” He added that the Korean Dream does not end with the unification of the Korean peninsula but is a vision that reaches out from the nation to the world. “One of the leaders of Korea’s independence movement, Baekbom Kim Gu, whom I mention in my book, captured the sentiment of the patriots of that time when he wrote, “I wish my nation would be a nation that doesn’t just imitate others, but rather it be a nation that is the source of a new and higher culture, that it can become the goal and an example [for others]. And thus true world peace could come from our nation.” The GPLC was organized by a coalition including the Ministry of Unification, Ministry of Foreign Affairs, Action for Korea United, the Global Peace Foundation, and other faith-based and civil society supporters. A day earlier, a banquet and ceremony marked the formal launch of The Korean Dream: A Vision for a Unified Korea, a new book by Dr. Moon which examines Korean history and heritage as a source of shared values for a unified Korean people.

The original article appears on www.globalpeace.org.