Keynote Remarks at the Congressional Roundtable and Forum on “U.S.-ROK Alliance for a Free and Unified Korea” 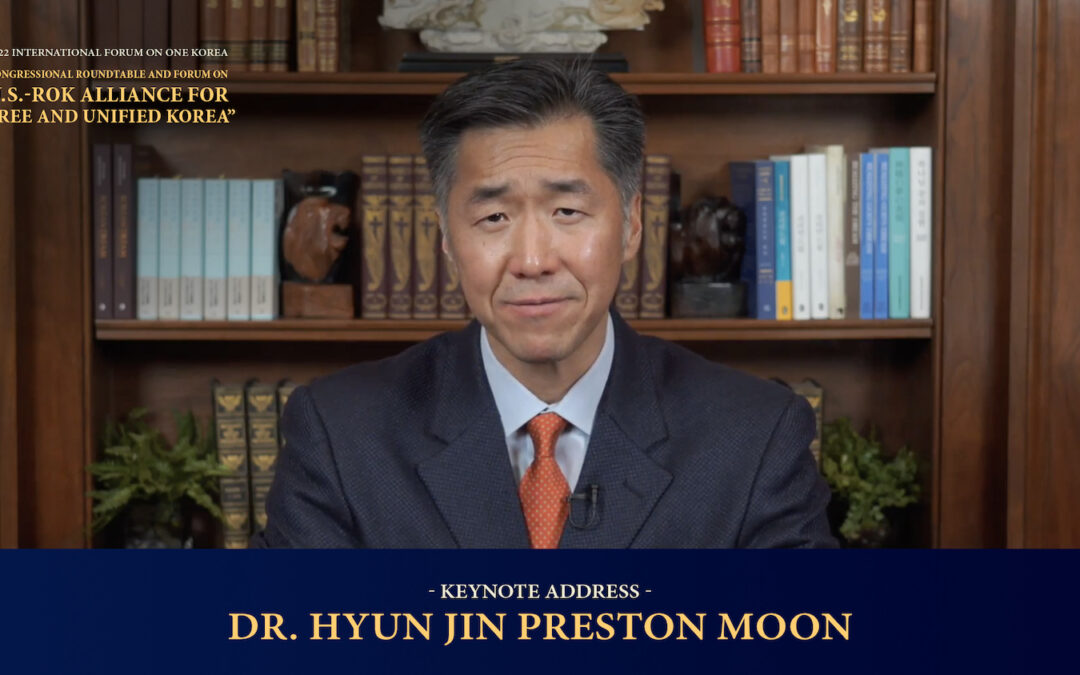 Ladies and gentlemen, I am honored to address this global gathering, especially at such a watershed moment in world affairs.

I want to thank all our distinguished speakers, especially the members of the ROK National Assembly and the US Congress for your participation and leadership. Your joint cooperation is more important today than ever in shaping a clear, strategic vision for the future of the Korean peninsula.  I also want to thank my good friend, Dr. Edwin Feulner, for his lifelong work in championing the cause of freedom, and his unwavering support for the vital US-ROK alliance.

Ladies and gentlemen, Russia’s unprovoked invasion of Ukraine, with its brutal implementation, has been a rude awakening for the world. Issues that most of the West considered long settled after the Cold War have been violently reopened by Mr. Putin. His reprehensible war reminds us that there are still dictatorial state powers ready to use force to impose their will on their neighbors.

The reaction to his naked aggression must have come as a great shock to Mr. Putin. Instead of overwhelming the Ukrainian forces in the initial stages of the invasion leading to the collapse of the Zelensky regime, his forces were met with a fierce, united resistance all along their sectors of advance. From the streets of Kyiv to the Donbas of eastern Ukraine, a massive movement of private citizens has heroically put their lives on the line to defend their country, their sovereignty and their freedoms.

The courage and determination of the Ukrainian people have jolted the wider public and nations out of their complacency. Compelling stories of ordinary citizens fighting back against this brutal onslaught have filled 24-hour cable news channels. Tech-savvy Ukrainians have joined the information battle, effectively using social media to alert the world to what is happening to their families, communities and their nation. Broad support for the Ukrainian cause has pressed officials in many nations to take action.

This international response has not been the weak, divided, rhetorical hot air that Putin must have expected. Instead it has been resolute and unified, especially among NATO and European Union members. Together with the US and global allies, they have imposed heavy sanctions on Russia and are providing massive amounts of arms and aid to Ukraine’s resistance.

Earlier this month, UK Prime Minister, Boris Johnson, in a daring show of support, walked the streets of Kyiv in solidarity with Ukrainian President Zelensky. He was followed by the leaders of Poland and the Baltic states, countries that have first-hand knowledge and experience of Russian control during the Soviet era.

These leaders recognize that the Ukraine crisis is at root about a clash of civilizational values – one of universal, God-given freedom and rights versus that of statist totalitarianism. There are essential values that must be defended against aggression, and this has significant global implications. NATO’s secretary-general spelled this out at the recent meeting of NATO foreign ministers also attended by representatives of South Korea, Japan, Australia, and New Zealand. Noting that China had joined Russia in questioning the right of nations to choose their own path, he underscored the need for democracies to stand together to protect their fundamental rights and values.

China has, of course, been watching the situation closely. The price being exacted on Russia by Ukrainian resistance and international sanctions is likely to make China more cautious as it weighs the costs and benefits of imposing its will through military force, especially in Taiwan.

Not surprisingly, North Korea test-launched ballistic missiles twice in the wake of the Russian invasion, reminding the world, and especially South Korea, of its offensive capabilities. But this is just saber-rattling. The use of military force against South Korea is off the table in the current climate as long as international support and, especially, the U.S. alliance, remains strong.

This is a critical juncture at which to demonstrate without doubt that such wars are unacceptable in the 21st century. To do so, the international community must be united and resolute in its response, and Ukraine must prevail. Such a decisive defense of freedom, human rights, and self-determination will have far-reaching implications, making it clear that these are not merely political positions or national policy, but universal principles necessary to human flourishing and peace in this century.

Free peoples and their nations everywhere must stand together to protect our fundamental freedoms, affirming that the rights of all people are endowed by God, not by any government or regime. Ambitious authoritarian regimes seeking to expand their territories through military aggression must know clearly that they will face stiff international consequences, and will not succeed in the long run.

This will have significant geopolitical ramifications, and most immediately in northeast Asia. The current division of the Korean peninsula is rooted in unresolved issues from World War II and the Cold War. The 1919 Sam Il Independence movement, under Japanese colonial rule, called for Korea to be “united, independent and free.” Yet today, Korea remains divided, and 25 million of its people lack basic freedoms and rights. That has brought untold suffering to the Korean people and insecurity to the region and to the world.

The Ukrainian crisis is a rude awakening that should be a catalyst for a bold new approach and clear strategic thinking across the Korean peninsula. That should begin with the people of South Korea who enjoy freedom but have become indifferent. Awakened and inspired by the Ukrainian example, they should actively engage in shaping the future of the whole Korean people.

Likewise, the current circumstances are a striking reminder that the US-ROK alliance remains vitally important to preserve a free and independent Korean nation as the foundation for the ultimate transformation of the peninsula, the region and the world.

This can be a watershed moment for Korea unlike any other. A free and unified Korea could become a compelling alternative to the people of both South and North Korea in the face of global authoritarianism.

US and ROK policy to date has been piecemeal and reactive, with North Korea too often in the driving seat. I have long advocated that it be replaced by a broad, forward-looking strategy focused on our end goal as a free and sovereign nation. A unified Korea, that upholds fundamental human rights and values, should become the clearly stated and actively pursued policy of ROK’s new Yoon administration, as well as the U.S., allies and the United Nations. This would provide a clear end goal for Korea policy and a framework for all negotiations with North Korea.

In the same way that the U.S. Constitution drew upon the principles articulated in the Declaration of Independence, a unification strategy must begin with the historic ideals that have motivated the Korean people. Their aspiration was to create a model nation, drawing upon a shared culture and identity that long predates the current division. In particular, it must look to Korea’s foundational philosophy of Hongik Ingan, or “living for the benefit of all mankind,” which aligns with the highest ideals and principles of democracy. I call this approach the Korean Dream and have explained it in my book of that name.

With its focus on traditional Korean identity, this approach could ultimately appeal to Koreans in the North. The situation there is unsustainable. Sooner or later something has to give. The North Korean elite will have to decide if they want to be drawn ever closer into the orbit of China’s authoritarian ambitions or find another path that preserves their unique Korean independent identity.

These aspirations cannot be realized without international support. It is in the interests of the United States to take the lead in this effort. Not only would a free and unified Korea diminish the nuclear threat to Korea, Japan and the US, it will create, in effect, a new nation which upholds liberty and democratic principles in a region where statist approaches are on the rise.

The U.S. should widen its Korea focus with a long-term strategic approach. An excellent model is its policy to rebuild Europe after World War II through the Marshall plan, creating strong democracies and firm allies. Such an approach could be adapted to present circumstances.

Rather than directly taking the lead in dealing with North Korea, the U.S. should provide strong policy support for a free and unified Korea along with its commitment for economic assistance in rebuilding the North. South Korea, which the North has always tried to sideline in negotiations, should lead in the process, with American backing and strong regional support.

Finally, great social transformation requires the active engagement of a broad public united in pursuit of a common cause. Just as with the effort to stop Russian aggression in Ukraine, the movement for a unified Korea should marshal broad Korean and international public support expressed through active civic organizations and NGOs.

This charge has been taken up by Action for Korea United, one of our co-conveners here today, and the largest citizen-driven movement for unification in the history of South Korea. It is making unprecedented progress in building civic consensus, bridging political, religious, and regional divides, and collaborating with government and other stakeholders to promote the cause of unification among Koreans everywhere.

By overcoming its own colonial and Cold War history, a free and unified Korea that upholds the freedom and essential rights endowed to all by God can play a major leadership role in Asia and throughout the world.

With vision, leadership, and robust civic action, Korea’s historical quest for one free, independent, sovereign nation is a timely, and achievable goal that will bring great benefit to the world. I believe each of my Korean compatriots in today’s forum engaged in Action for Korea United here and across the diaspora in America and around the world, are ready to lead this effort.

Now more than ever, we must stand together for the freedom and fundamental rights of the entire human family. Let us seize this opportunity now, in the 21st century, to build together a history of freedom, peace and well-being for all.

Thank you very much for your leadership and commitment to this most important cause.

May God bless you and your families.