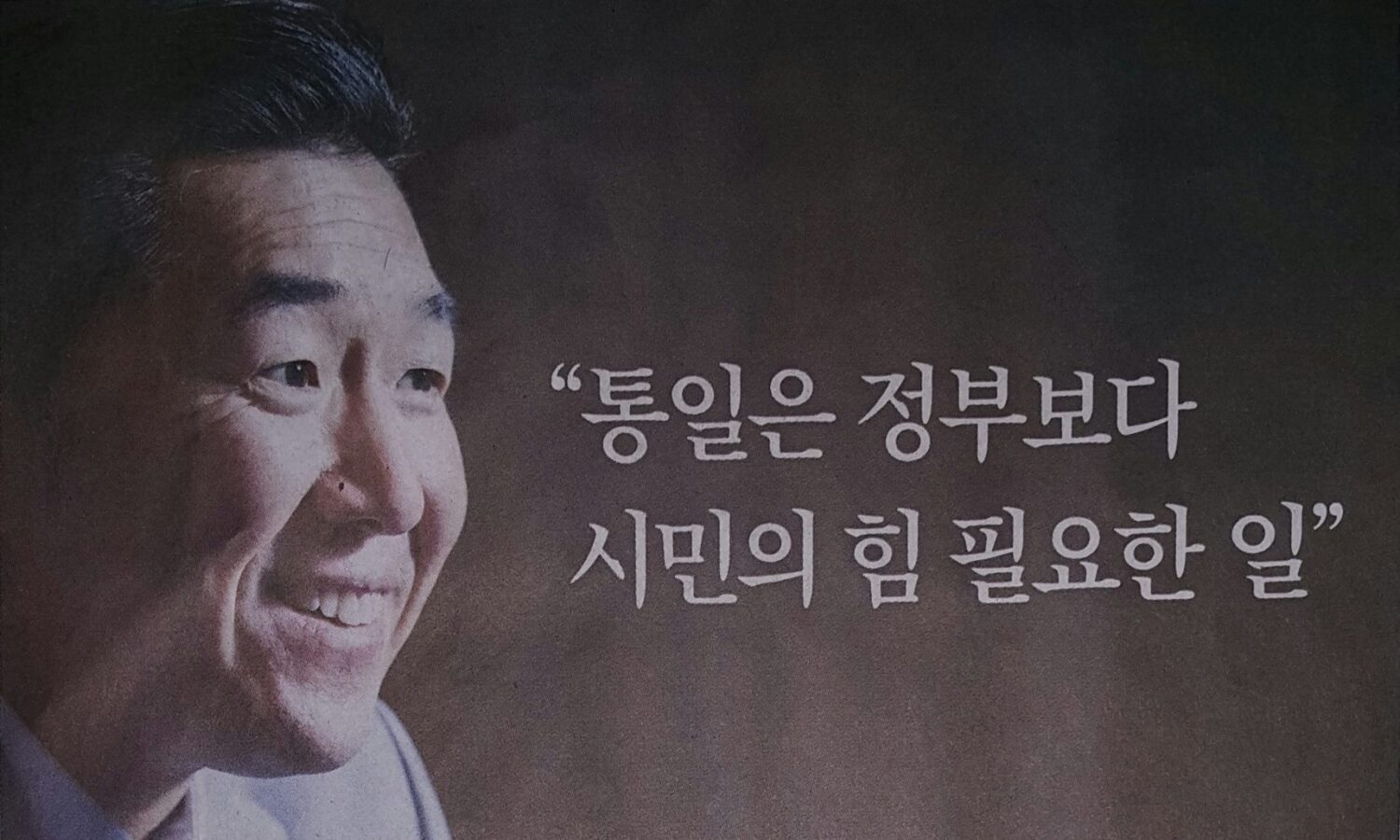 Below is the English translation of the article. Visit here for the original article in Korean.

Hyun Jin Moon (46), Chairman of the Global Peace Foundation (GPF) and the third son of late Sun Myung Moon, the founder of the Unification Church, jumped into the world peace movement through the GPF, an international non-profit private organization established in 2009. It has no relation to the Unification Church. With the headquarters located in Washington, the foundation has branches in 22 countries worldwide, fostering peacebuilding beyond religious differences including support for sustainable development model for developing nations.

GPF hosted the Economic Forum on the Unification of the Korean Peninsula on the 8th at the InterContinental Hotel in Samsung-dong, Seoul. From various civic, academic, and religious sectors, 1,200 participants including Edwin Feulner, the founder of the Heritage Foundation and Jong Wook Jeong, Vice Chairperson of the Presidential Committee for Unification Preparation, were present that day. Dr. Moon suggested, “in order to lead national unification, we must strengthen our economy.” As a focal point he urged reform of the financial system. He also sponsored “The New Era Unification Song” campaign led by 1,100 civic groups.

-What is the objective of this event?
“That for the first time in Korea, a public-based, domestic and international, grass-roots Korean unification movement has begun. Since my father opened a door for interactions between the South and the North, relations have been expanded through the Sunshine Policy. However, the movement went in an unexpected direction and as a result extended the North’s regime and even ended up supporting their nuclear development. This was due to the lack of an overall strategy and precise goals by both governmental and civil groups. To truly achieve the national unification, we must have a shared vision and initiate a unification movement which can embrace liberals, conservatives and religious groups. ‘Korean Dream’ was presented as that vision and a new frame of Unification not based on the cold war paradigm but based on shared Korean identity.”

-「Korean Dream」 is also the title of your book about your vision of reunification published last year. What exactly does “Korean Dream” mean?
“It is our national identity and the destiny of our people based on the philosophy of ’Hongik Ingan’. Koreans have been raised with Hongik Ingan, a concept of ‘benefiting all people’ and take it for granted. However, from the eyes of an individual who was educated overseas, this should be a source of pride. People generally think that the concept of human rights and freedom is rooted in the Western tradition. However, Korea is the only country that, from ancient times, has conceived the ideals of benefiting the entire human race. It is our mission to bring peace to the world as well as the Korean peninsula and to benefit everyone.”

“ ‘A unified Korea’ could be the world’s 8th largest economic power
To gain power to lead the national unification, economic strength through financial reform is mandatory
A people-led grass-roots unification movements is necessary”

-Younger generations are relatively less concerned with the idea of national unification. How would you explain to them the relevance of reunification?
“Some of the older generations have planted the incorrect idea that reunification is too expensive. For that, we are all to blame. We must let them know the truth based on facts. If you say the Unification doesn’t matter to us, who will try? We must let them know that it concerns us all. It is not something incredibly difficult, nor has negative effects. It is achievable for the benefit of the world. Goldman Sachs stated that Korea will become the 8th largest economic power in the world after reunification.”

-You have discussed economic effects. How should the Korean economy prepare for reunification?
“The most negative aspect of the Korean economy is that the government intervenes and tries to manipulate the system. Reforms in the financial market are essential. Through the innovation of the financial sector, more people should be able to access capital and this will eventually create even more capital. To achieve social reforms and lead national unification, the Korean economy must be more robust.”

-It seems that you emphasize civil society led movements but ultimately the government’s economic policy should also be innovated. Does this mean that the reunification movement will be difficult if only with civil pressures?
“There are differences between the conventional civil movements and the grass-roots public movements that I am supporting. It means that beyond the ideology of left and right, all sectors in Korean society, including religions and corporations, should participate in the movement. When that happens, the political sector cannot help but follow.”

-What should be done to help them take ownership of the issue of reunification?
“Since the commencement of this movement, I have met politicians and business people and they say, ‘Isn’t the government responsible for reunification?’ I am here to challenge that standpoint. From a perspective of a mature democratic society, national changes are led by the power of its people. Unification is our issue not someone else’s. Genghis Khan said, ‘a dream of an individual is only a dream, but when that dream is perceived by everyone, it become reality.’”