As Korea prepared to celebrate the 70th year of the end of WWII, there was much speculation over the content of Japanese Prime Minister Shinzo Abe’s August 15th message. 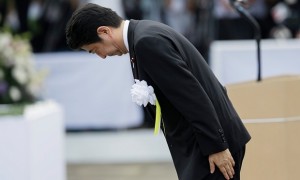 Shinzo Abe bows in front of the Peace Prayer statue in Nagasaki. It is expected he will include the word ‘apology’ in an anniversary statement later this week. Photograph: Kimimasa Mayama/EPA

China’s foreign ministry released a statement that it expected a “clear and correct message about the nature of the war and its responsibility for it.” The avid interest in Abe’s remarks indicates an opening out of decades of mutual disregard and, at times, open hostility between Japan and both China and Korea.

70 years after the end of WWII, Japan, South Korea and China have prospered as well as endured economic stagnation, usually attempting to exist independent of the others, cooperating only when it was of clear benefit to national interests.

Yet, cooperation among the three countries has economic, social, technological, cultural, scientific and especially regional security benefits. Even beyond the threat of a nuclear North Korea, China’s growing military might and Japan’s move towards “collective self-defense” speaks to the real and present dangers in Northeast Asia.

In an effort to move beyond and away from this pattern, Japan can take the lead into easing tensions for the region as a whole by focusing on larger regional interests. The foreword to the Japanese edition of the Korean Dream encourages the Japanese government and people to support and pursue Korean unification:

It is hoped that the nations of Japan and Korea and their people can bring closure to those issues that still tie us to the past and work together for the future peace and prosperity for the entire Northeast region. For a Korea unified on the basis of universal principles and shared values would free Japan from the current nuclear and missile threat and open the door for greater trade and investment as well.

There is a large population of Koreans from the two Koreas living in Japan and there are numerous opportunities to engage in talks on the vision, principles and values that can contribute to reunification of Korea.

Japanese business, political, social and even humanitarian interactions with both North and South Korea can have a bigger impact when guided by a larger vision of supporting Korean unification and Northeast Asia cooperation. Efforts to help Korea and the region will undoubtedly help both countries move beyond past resentments. 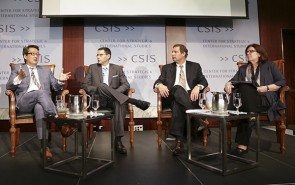 On July 7th in Washington DC, the Center for Strategic and International Studies (CSIS) and the Global Peace Foundation hosted the last of a five-part series examining key themes presented in Dr. Moon’s book, “Korean Dream: A Vision for a Unified Korea.” The final forum focused on Japan-Korea relations and the need for Japan to actively engage in Korean reunification.

The Chosun Times reported that:

A majority also [feels] that Japan does not contribute significantly to peace on the Korean Peninsula and promoting reunification. Some 53.9 percent said Japan actually hinders stability on the peninsula, even more than North Korea’s staunch ally China, which 42.1 percent see as an obstacle, and Russia at 37.9 percent.”

Sheila Smith of the Council of Foreign Relations proposed that Japan is undergoing “Korea fatigue,” due to ongoing demonstrations over resentments over Japan’s colonization. Michael Auslin of the American Enterprise Institute said that Japan would likely be positive about Korean unification, but cautious, clearly endorsing a unified Korea that sustains democratic values.

Clearly, the best way to ensure that this happens is to be a part of the process.

The experts at the forum were hopeful, emphasizing that cooperation based on mutual concerns such as regional security, health and economic development could serve as the foundation for improved relations, as well as grassroots civil engagement and education.

Smith referred to Kim Dae-jung’s appeal to view Korea-Japan relations from a wider lens, observing that the 20th century was just a small moment in the long history of Japan and Korean relations. “No leader since has done that,” said Smith, stressing the need for serious political leadership in both countries to establish a forward-looking vision of their relationship.

Korean reunification is one that reaches well beyond the scope of Korea and the Korean people. The global community – from Japan, China, Russia and beyond – would do well to recognize this and actively support the process.