The 68th General Assembly hosted a special session today to scale up efforts for the Millennium Development Goals, eight time-bound, measurable goals to end poverty. According to the President of the General Assembly, H.E. Ambassador John W. Ashe, there are only 850 days left before the 2015 deadline. The United Nations is starting to draft post-2015 goals. H.E. Ambassador Ashe urged member states to consider a common goal “of which we can be proud, that leaves a lasting legacy, and establishes norms and frameworks that improve human well-being and dignity.” 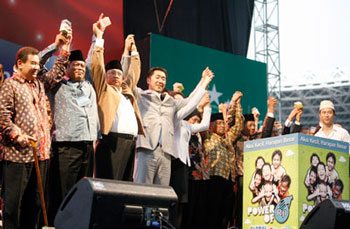 At such a juncture, it is fitting to recall the Jakarta Declaration, issued on October 18, 2010, at the close of the Global Peace Leadership Conference, a remarkable assembly of religious leaders that convened in Jakarta, Indonesia.

At the conference, Dr. Moon called on religious and faith leaders to champion human rights and the fight against poverty while providing the moral leadership needed for this task. He said:

“The role of faith is vital in establishing moral and innovative leadership, because it serves as the bedrock for society’s collective conscience and sense of virtue. All around the world, the activism of such leaders are affecting their communities on political, social and economic issues ranging from championing human rights to fighting to maintain traditional values as well as engaging the Millennium Development Goals. Faith leaders include not only clergy, ministers, priests, rabbis, imams or monks but also lay men and women who are guided by their faith.Whether engaged in the profession of education, business, media, NGOs, politics or religion, they are motivated by faith and conscience to serve as moral and innovative leaders. Faith has always been a powerful motivating force in movements to positively transform society for the greatest good. Today, it is all the more important for people of faith to rise together, beyond our religious differences, and tackle the common challenges that are facing our communities, nations and the world.”

At the close of the Conference, Declaration signers committed, “with courage and resolve to forge vibrant and meaningful interfaith partnerships and programs for promoting universal social cohesion based on our common identity, shared values, principles, and morals,”  and to create “action oriented interfaith partnerships” that generate innovative programs to tackle issues such as health, education, poverty, environmental sustainability and the strengthening f families.

Innovative initiative like the Power of 10 Rupiah, All Light Villages, and the Character and Creativity Initiative have resulted from these partnerships. Essential to these projects are the principles that guide and motivate these projects.

The Jakarta Declaration references spiritual leaders like Mahatma Gandhi, Nelson Mandela, Mother Teresa, Dr. Martin Luther King, Jr. and K.H. Abdurrahaman Wahid (Gus Dur), who set forth examples of the basic principles of most religious traditions as they worked beyond their religious community to serve humanity.

Dr. Moon also observed, “the founders of all the great religions were advocates for peace who championed the ideals of self-discipline and a selfless love for humanity. They taught and lived a life of tolerance and understanding, charity and brotherhood, righteousness and justice, and, most of all, principles and values. Their lives were a testament to the ideal that humanity is “One Family under God.”

Thus, key to fighting poverty, protecting the earth, or advocating human rights and dignity, are the basic principles and values that make up the foundation of a world of peace and prosperity. And central players should be religious and spiritual leaders.