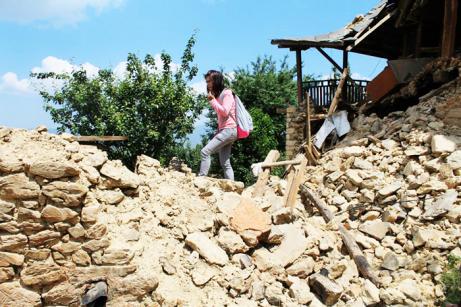 Bambie Panta was at home having lunch with her husband, Global Peace Foundation – Nepal President Ram Panta and their two children when the massive earthquake hit Kathamndu and surrounding areas in April 2015. Her husband grabbed the children and made for the door. “I don’t remember getting out of the flat,” said Bambie.

Their three story apartment building survived the earthquake, but the tremors continued through the next few days. To be safe, Bambie and her family camped outside, going in when they dared to get clothes, food and blankets. The nightmarish three days are a blur to Bambie.

“I kept thinking, I’m going to die, but even so, I thought, even if  I die, I’ll be okay because I’m with my family.”

Five months have passed since that day, and Bambie and her family have done more than survive, they have actively supported “Rise Nepal,” a movement of young Nepali volunteers who have inspired international support to help “Nepal Rise and Shine again.”

The Global Peace Foundation’s communications team caught up with Bambie who was busy coordinating volunteers, gathering donations and distributing much needed aid. Their latest initiative is the “Shelter of Hope” campaign that is building 1,000 temporary housing units for displaced families.

We asked her about what inspires her to keep going, what she has learned about the character of Nepal, and her assessment of the process of rebuilding a nation.

GPF: “Rise Nepal” started almost immediately after the earthquake. How were you able to make the quick switch from shock to action?

Bambie: Actually for the first three days we just stayed out in the open space. Less than fifteen minutes after the earthquake, my husband went back into the flat, grabbed his wallet and phone and went to see his parents. I stayed with the kids in the open space by our flat, just trying to survive. I honestly felt helpless for the first three days.

For three days we had no contact with the world. I would hear from people coming through that the destruction was pretty bad, but we didn’t even have an FM/AM radio. I had no idea until I got on the internet and saw all the people on my Facebook page from all over the world asking “How are you?” I realized how many buildings were destroyed and how many people died.

It was on the fourth day after the initial earthquake that we finally got to the GPF office. We actually have no experience with disaster relief, we didn’t know who to contact, where to go or what to do. But [Global Peace Foundation’s Vice President] David Caprara sent Sam Johnson [a disaster relief expert].  Honestly, the first few days were chaos. Sam Johnson helped a lot. He tried to get us on the ground.

Global Peace Youth and Sam Johnson have really led Rise Nepal. I just supported them. I started to help make the connection with the schools that I had begun to work with through CCI (the Character and Creativity Initiative is part of Global Peace Education’s work to transform education). My interns and I began visiting the schools. I wanted to make sure that whatever relief we would be giving them was actually meeting their needs. Right now they need lights and shelters.  Our team is doing a great job. We have tried to reach as many places as they can, with whatever materials that we had.

(Sam Johnson is an advisor of the Asian-Pacific Peace and Development Service Alliance that had just convened its South Asian consultation in Nepal just a few weeks before the earthquake. He is founder of the Student Volunteer Corps in Christchurch New Zealand that has effectively engaged youth in the clean-up and rebuilding on Christchurch after a series of earthquakes in 2010).

GPF:  How have your kids and other children been coping with the earthquake? One of the children in the United States saw some Rise Nepal photos and wondered what has helped the children smile despite the devastation?

Bambie:  Kids are very resilient. My youngest son told me “I’m not afraid.” My oldest understood more, so he was more worried. After the earthquake, he told me to make sure we took him out of the house if he was sleeping during another earthquake.

I reassured him, “You are here with us, you’ll be safe, as long as you are with your mom and dad, don’t worry.”

Family is really important.  And just love, really, to just love my kids. To talk to them, make them feel safe, hug them. It helps surrounding them with people who love them.

GPF: When things get difficult, what keeps you going?

So I try to reach out and help people who are in need. Also seeing people coming as well from other countries, and trying to help us, has inspired us all. We realize we also have to do something for our country; we can’t just depend on them. We’re really thankful— thankful for having survived and thankful for all the help from around the world.