International Forum on One Korea Advocates for a Peaceful, Principled Korean Unification 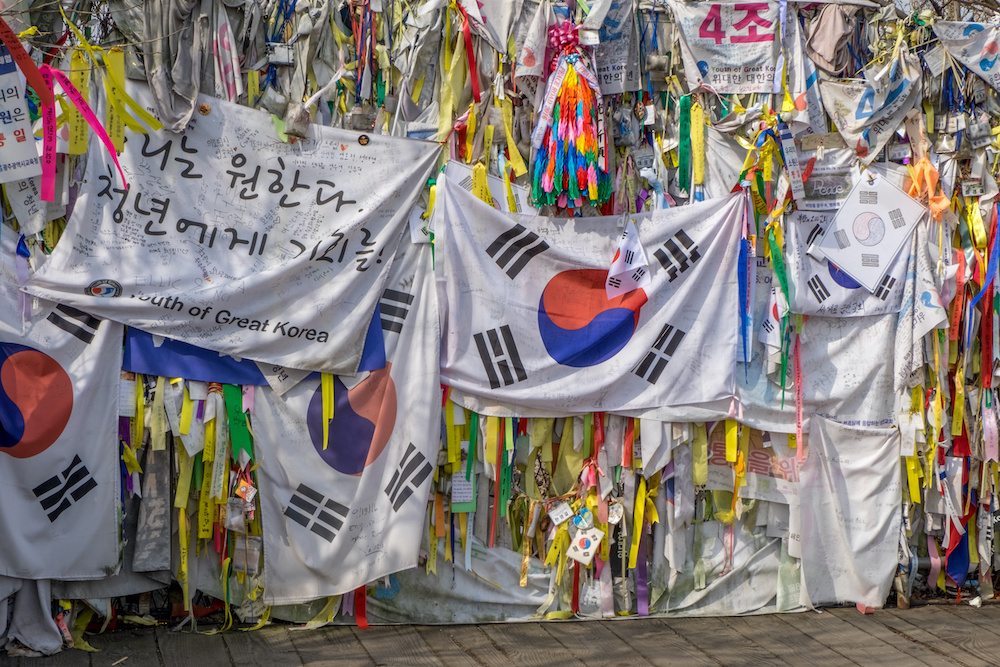 “The Korean Dream vision of unification would not only fulfill the long-held aspiration of our ancestors but would also open up a new chapter of greater prosperity and peace for the peninsula. It would bring together the existing synergistic elements of both Koreas for the benefit of all.” —Dr. Hyun Jin P. Moon (International Forum on One Korea, August 2020)

The following article from Global Peace Foundation (GPF) covers the second convening in a series of expert forums in 2020, sponsored by GPF, Action for Korea United, One Korea Foundation, and Blue Banner. The forums advocate peaceful, principled Korean unification based on the Korean Dream approach—as outlined in Dr. Hyun Jin P. Moon’s book Korean Dream—drawing on the ideals, shared values and history of the Korean people to build a free and unified Korea that advances regional peace and security, human rights, family reunification and shared prosperity for all Koreans.

The vision described by Dr. Moon has drastically shifted the dialogue of Korean unification in the region to pave a “third path.”

This Korean-led and comprehensive approach goes beyond the singular issue of denuclearization and engages players from all sectors of society to discuss what a free and unified Korean economy and society will look like in the long-term. 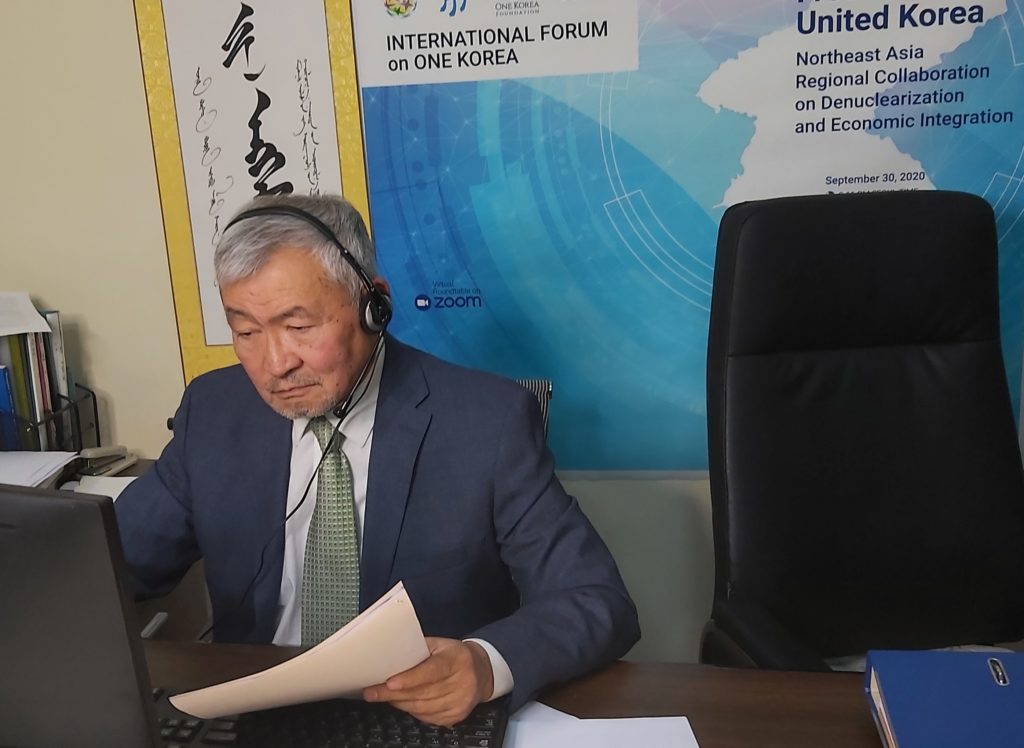 Jargalsaikhany Enkhsaikhan, former Mongolian Ambassador to the United Nations and Chairman of Blue Banner, a co-convener of the International Forum on One Korea.

Former Mongolian Ambassador to the United Nations and architect of Mongolia’s nuclear-weapon-free status initiative Jargalsaikhany Enkhsaikhan told an international forum on September 30 that “establishing a Northeast Asian nuclear-weapon-free zone (NEA-NWFZ) and providing North Korea with a joint, credible mini-Marshall Plan might be a win-win solution for the Korean peninsula as well as for overall regional security and development.” Both the U.S. and North Korea need to adopt “bold conceptual approaches to resolve security threats on the Korean peninsula,” Enkhsaikhan said, “including deterrence that excludes nuclear weapons.”

The second convening of the International Forum on One Korea, “Free and Unified Korea: Northeast Asia Regional Collaboration on Denuclearization and Economic Integration,” addressed denuclearization and economic integration of the peninsula and Northeast Asia region in two concurrent sessions. Some 35 security experts, economists and political scientists from South Korea, China, Japan, Great Britain, Finland, Russia, India, Mongolia and the United States examined the two issues in the context of resolving the 74-year division of the Korean peninsula.

“Our search for denuclearization and economic integration should be pursued along with unification of the Korean peninsula,” said Dr. Jai Ryu, founder and chairman of the One Korea Foundation. “These are not three separate goals, but three interconnected and interdependent facets of the same vision.”

“As governments and large multilateral institutions move slowly, it is imperative that contingency plans be considered to enable a peaceful, mutually productive framework for the economic integration of the Korean peninsula.”

Sponsored by the Global Peace Foundation, Action for Korea United, One Korea Foundation, and Blue Banner, a Mongolian NGO chaired by Enkhsaikhan that promotes the goals of nuclear non-proliferation, the forum discussed prospects of establishing a NEA-NWFZ that would include security guaranties from Russia, China and the USA, as well as commitments to non-nuclear deterrence and development of a “post-Cold War framework” of regional cooperation.

“Russian and Chinese security assurances would be important in convincing North Korea a NEA-NWFZ would be legally and politically credible,” Enkhsaikhan said, adding that a binding commitment to non-nuclear deterrence would also avert a possible regional nuclear arms race. 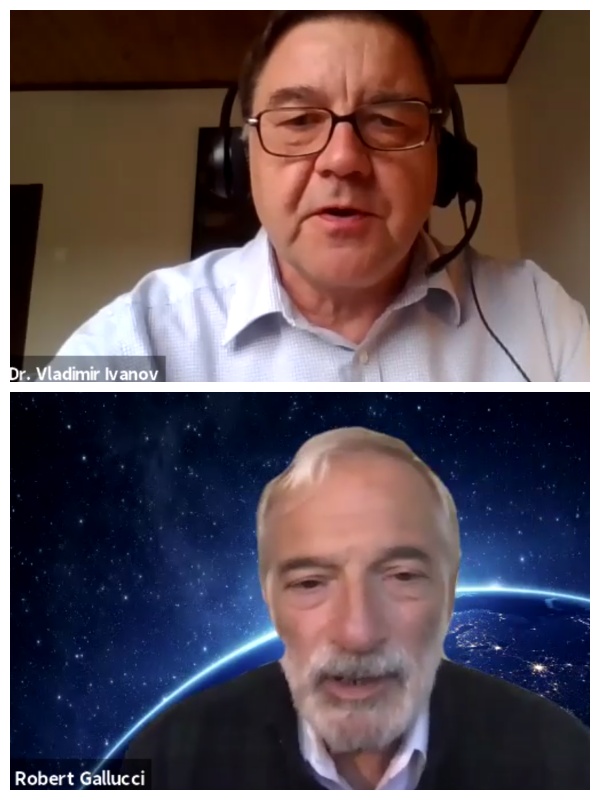 Addressing the forum from Russia, EastWest Institute Moscow Director Vladimir Ivanov said, “Russia’s positive, long-term relations with most regional powers, as well as its deep commitment to NPT (Non-proliferation Treaty), make it a potentially strong guarantor of the peace process on the Korean peninsula. It is important to mention that Russia and China have developed a joint policy for denuclearization of the peninsula.”

The chief U.S. negotiator during the North Korean nuclear crisis of 1994 and former Assistant Secretary of State for Political Military Affairs Dr. Robert Gallucci said, “For the last seventy years, the resumption of hostilities on the Korean peninsula has been of concern to the international community. Simply put, the expansion of [NWFZs] to additional countries reduces the salience of nuclear weapons as an element in the calculations of national security.”

A concurrent roundtable, “Regional Economic Integration Strategies,” examined prospects for economic development in Northeast Asia, with the case study of Mongolia’s transition from a centralized command economy to a free market, with trade ties throughout the region. “As governments and large multilateral institutions move slowly,” said John Dickson, president of the World Trade Partnership, “it is imperative that contingency plans be considered to enable a peaceful, mutually productive framework for the economic integration of the Korean peninsula.”

Vietnam presented a useful example of political normalization and integration into the global economy, said Sourabh Gupta, Senior Fellow, Institute for China-America Studies. Gupta outlined four lessons that could apply to North Korea: A transitioning state cannot afford to be both a ‘security state’ and ‘development state’; reform must happen at the macro level, with one-off ventures not sufficient; land reform is fundamental, with all the Asian Tigers all instituting basic land reform; and international financial institutions are essential for capacity building and developing foreign confidence for investment. 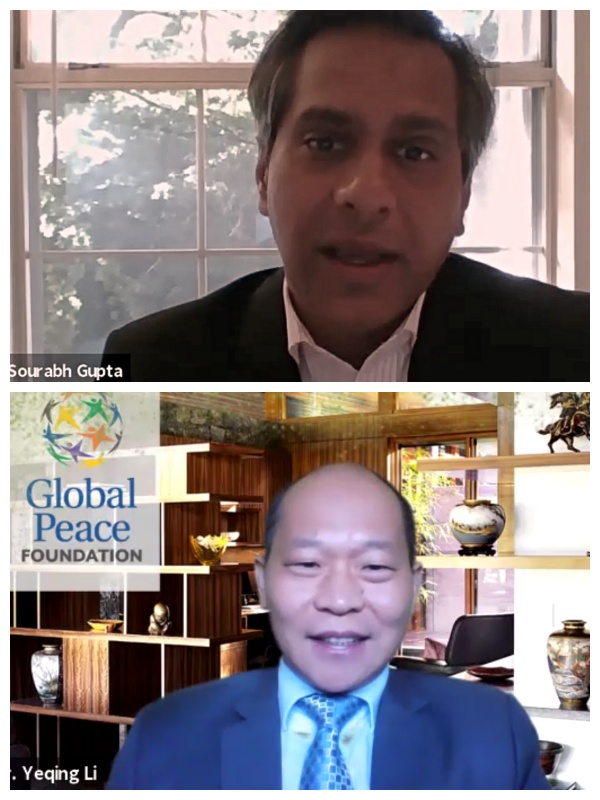 Victor Gao, Vice President of the Center for China and Globalization and former English interpreter for Chinese President Deng Xiaoping, said China “fully supports Korean reunification, but it cannot be achieved without denuclearizing of Korean peninsula.” Cautioning that economic and political integration will be a long process that will require mutual trust, he said a free Korea with human rights and respect for law are important to pursue. “Economic unification and integration leading to eventual political reunification will absolutely be a good thing for Asia.”

Yeqing Li, a Senior Fellow on Northeast Asia Peace and Development at the Global Peace Foundation, noted that China is the largest trading partner of both North and South Korea and peaceful unification with the development of infrastructure, manufacturing, tourism, mining and the service sector is “low hanging fruit” for Chinese and regional economic growth.

The forum concluded with an agreement by the organizers to create an ongoing regional secretariat for the NEA-NWFZ discussion with the end goal of a free and unified Korea.

Panelists addressing the virtual International Forum on One Korea on regional security and denuclearization (left) and economic integration (right) on September 30, 2020.