Grandmother’s Jang and the Korean Virtue of Jeong Seong 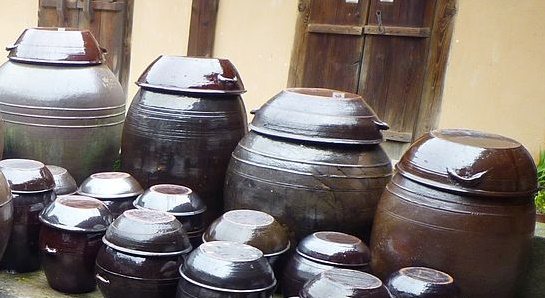 “The extended family is where true sincerity is learned, as embodied in the concept of jeong seong. This ideal of sincerity permeates every aspect of daily life, from the making of clothes, to food, to housing, and even to work – from the most menial of chores to the most noble of actions.”Korea Dream: A Vision for a Unified Korea

Below is a reflection of a granddaughter about her grandmother that captures the spirit of jeong seong in the making of a traditional Korean condiment dwenjang. Jeong seong, loosely translated as sincerity, is highlighted in Dr. Hyun Jin Preston Moon’s book, Korean Dream: A Vision of a Unified Korea, as a virtue preserved in the Korean traditional family model that speaks to the ethic of Hongik Ingan, or living for the benefit of humankind. The Korean Dream proposes an approach to Korean reunification that begins with identifying a shared vision and common values such as hongik ingan as a foundation to reunify the people after almost 70 years of division.

When I think of jeong seong, an image emerges in my mind of my grandmother, and how in the little things she poured out her heart to her children and grandchildren. She wasn’t highly educated, the eldest daughter of a local farmer who married another farmer’s son who went on to become an engineer. She found ways to love her children in her food: from her hand-made pickles at the end of the year, fresh picked persimmons in fall, and juicy watermelon in the summer, she was very intentional in making sure we experienced the bounty of every season when she could. In the simplest actions, she found ways to put in her love and prayers for our health and happiness.

For my father, she found a way to be present for him, even after he settled across the Pacific Ocean in the United States. Every year, grandmother would send a 5 quart Tupperware of a putrid smelling soy bean paste to dad. He would ration the precious concoction, only eating a small dish once a day. He ate it with everything, from rice, to fish, meat, and sometimes just by itself. Whenever it hit the table, all the children scooted to one site of the dining table, grimacing and trying to avoid the smell.

Simply translated, he called it the “soy sauce flesh.” Looking back, I think it was grandma’s version of dwenjang, a salty, fermented soybean paste common in Korean cooking–except this version, only grandma could make. For his children who grew up in the United States, it smelled rotten and tasted overly salty and bitter. But for my father it was a taste that took him back to the warm, safe embrace of his mother.

As the year progressed, the smell would get worse, and sometimes we could see a light layer of white skin forming on top of the beans. This wouldn’t phase my father who would just mix it in and smile, saying it added “flavor.”

Year later, I was lucky enough to witness what made my grandmother’s “soy sauce flesh” so delectable.  As I watched the careful steps she took in each phase of the process, I began to understand why my father loved it so much. While – in terms of flavor – I still consider it to be an acquired taste, I saw how much sincerity, or jeong seong, she invested into the creation of that smelly paste, and realized that was probably what my father was really tasting. 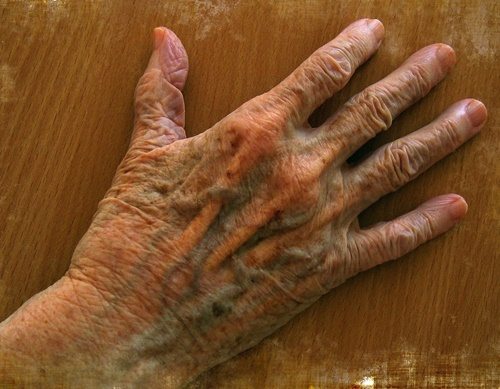 In the past, she would actually harvest the soybeans herself, but the family farm has shrunken to a small plot she can manage, not enough for soybeans. So she makes a yearly order of beans and salt. The start of the process takes a week, from boiling the soybeans with ingredients that include salt, dried kelp, and other things I couldn’t identify, to straining and packing the mixture into clay pots.

The real work begins after that. She visits her concoction every day for months. Before she goes to visit the fruit, she carefully washes her hands and puts on her special pink rubber gloves and hair net, orange boots, and a specifically designated apron with the same devotion as someone going to church or saying their daily prayers. Some days she mixes the soybean paste, some days she airs it, sometimes she washes the sides of the pots and others day she moves the pots from the shade to the sun.

At the end of the process is the smelly “soy sauce flesh” which is said to keep the colon clean and body healthy. But, after watching how much devotion she poured into it, I think it was really her love that she sent every year in a 5-quart plastic container, year after year, that kept my father healthy.

Watching her reminds me how much jeong seong mothers pour into everything that they do, from cleaning the house, to cooking our meals and making sure we brush our teeth and take our baths. In all these things, they teach us the heart of love and devotion and how to do the same for others in every little thing that we do.

Dr. Hyun Jin Preston Moon is founder and chairman of the Global Peace Foundation. GPF engages and organizes a global network of public and private-sector partners who develop community, national, and regional peace building models as the foundation for ethical and cohesive societies.