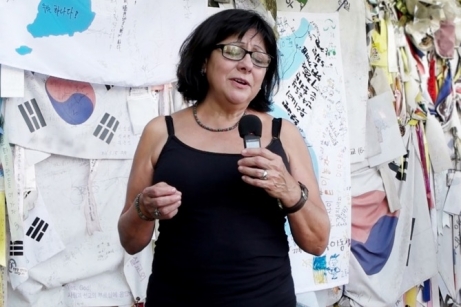 The One K Global Campaign is utilizing popular music and culture, engaging Korean and foreign artists such as Tish Honojosa from Mexico, in bringing awareness to the movement for peaceful Korean reunification and drawing wide international support. The campaign is rekindling hope in the hearts of Koreans in the North, South and abroad for a reunified homeland that spreads peace and prosperity to the world.

The following story about Tish Honojosa, a Mexican immigrant to America, illustrates the Korean Dream as a dream for all people from every background.

A gentle, sweet melody evoked feelings of sorrow as Korean reunification activists gathered at the demilitarized zone (DMZ), the infamous border separating North and South Korea, at the end of the summer in 2018. As Tish Honojosa, a Mexican American singer-songwriter, sang Donde Voy, a song depicting the lives and sorrows of Mexican immigrants, the gathering contemplated the tragic division of the Korean peninsula and the harsh reality of life in the North. 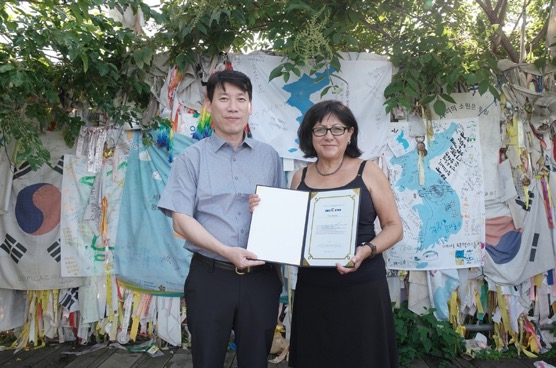 Representatives of the One K (Korea) Global Campaign, a grassroots movement dedicated to reunifying and bringing lasting peace to the Korean peninsula, named Tish Honojosa as an Honorary Ambassador of the campaign and presented her with a letter of appointment. Ms. Honojosa pledged her commitment to actively participate in the campaign and advance the goal of Korean reunification that summer day. She shared, “There should be no more wars… I hope the Korean Peninsula, the last remaining divided region on earth, will be reunified.”

Ms. Honojosa’s own parents immigrated legally to the United States many years ago. However, she grew up seeing the hardships of many immigrants who risked their lives to cross the border. Ms. Honojosa sang many songs throughout her career depicting the struggles and sorrows of Mexicans crossing the border in pursuit of a better life for themselves and their families as the lyrics of Donde Voy express:

“Days, weeks, and months
I spend very far from you
Very soon money will come to you
I want to have you next to me

The work fills my hours
Your smile I cannot forget
To live without your love is no life
To live as a fugitive, the same…”

Ms. Honojosa stood silently for a few moments while looking at the barbed wire that separates North Korea from South Korea. She empathized with the pain of the Koreans which felt all too familiar.  She broke the silence with words directed towards the North Korean defectors in attendance. “I also know how hard your journey is and how much courage you need because I know the plight of people from all parts of Central America crossing the Mexican border to America. As the road is dangerous, you realize how valuable freedom is. I sincerely hope that the day will come when the Korean Peninsula will reunite, and the loved ones meet again.” 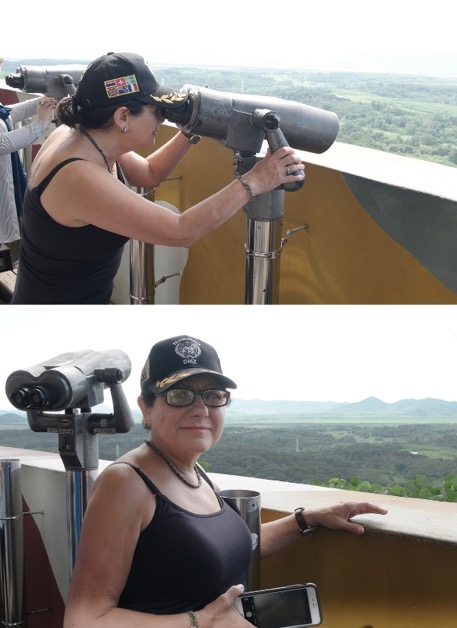 Ms. Honjosa walked around the Unification Observatory, which offers South Korea the closest views of North Korea, and has monuments promoting unification. She concluded her visit to the DMZ with words of sincere support. “I’m very happy and honored to join the campaign. If I have the chance, I would like to make a unification song with a message of hope for Koreans. And I hope the song can contribute to breaking through all the walls of the world.”

Ms. Honojosa has led an inspirational, borderless music career that blends Mexican folk and American country and pop genres. Her unique blend of styles has far-reaching appeal which led to a performance at the White House at the invitation of former President Bill Clinton.

Though the lyrics of Donde Voy express the sadness and despair of separating from a loved one in crossing the border, it also a song of hope for a brighter future:

“…Where I go, where I go
Hope is my destination…”

The One K Global Campaign is utilizing popular music and culture and engaging Korean and foreign artists such as Ms. Honojosa in bringing awareness to a wider population and in drawing international support; it is rekindling hope in the hearts of Koreans in the North, South and abroad of a reunified homeland that spreads peace and prosperity to the world.