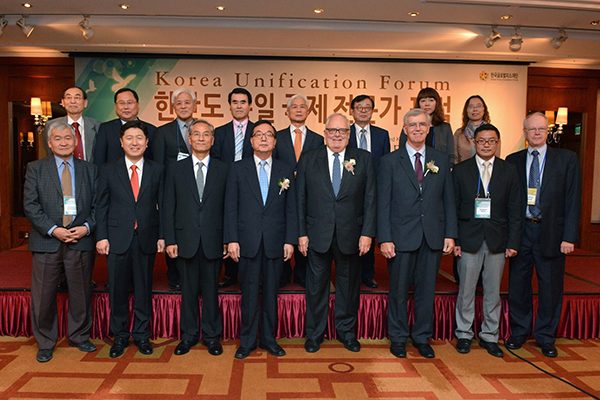 Scholars, researchers, civil society leaders and Korean government ministers urged greater consensus and collaboration in advancing a process of peaceful unification of the Korean peninsula at a forum convened in Seoul on October 8, 2015. The forum, “Role of Civil Society and Global Cooperation in Furthering a Unified Korea,” is part of a series of forums and public events to mark the seventieth anniversary of the liberation of Korea from Japanese occupation, and simultaneous division of the peninsula at the 38 parallel at the conclusion of World War II.

In welcoming remarks, Hon. Yong Pyo Hong, Minister of Unification for the Republic of Korea, noted that the Korean government was actively working to build national and international consensus. “It is conducting various programs aimed at raising public awareness of the necessity for unification,” he said, “so that the Korean people would enhance support for the unification, and is continuing dialogue and cooperation with civic groups. At the same time, the government is trying to fully utilize the opportunities of summits and other international conferences to widespread the vision for peaceful unification to the international community, under the banner of unification diplomacy.”

Hansun Foundation President Jae Wan Bahk reminded forum participants that in the 70 years since Korea was divided into North and South, few South Koreans have ever visited North Korea. North Korea, he said, “has become a hermit kingdom that is stranger than not only neighboring China or Japan but also faraway European countries or the United States. Reunification of the Korean Peninsula is destiny of the Korean people, which transcends its costs and benefits, or paths and phases.”

Citing the example of divided Germany, Bahk said it was East Germans’ “enthusiasm for national reunification than anything else” that led to collapse of the Berlin Wall. “We need to endeavor to motivate North Korean residents to long for reunification and disseminate the desire. It cannot be done by the government alone.”

In his address to the forum, U.S. Heritage Foundation founder and forum chairman Dr. Edwin Fuelner took time to clarify the nature and scope of civil society in national life. Civil society, he said, “is a cooperative assembly of individuals working through private sector organizations which are coming together voluntarily to work toward shared goals.” Civil society remains important, he added, for the shared objective of a reunited and free people on the entire Korean peninsula.

Paraphrasing Alexis De Tocqueville, a French aristocrat who recorded his impressions of the United States almost two centuries ago,  Feulner said voluntary associations like NGOs, clubs, religious organizations and civic associations “are not some mere after-thought, but rather they are at the core of our shared democratic system.” Citing examples of China and North Korea, Feulner warned about the “spiritual impoverishment . . . , lack of friendship, connection, trust and faith” that result from tightly restricting voluntary associations by government. “The most effective way for a government to secure its power is to eliminate the civil society sector,” he cautioned.

“I see society as an organic outgrowth that begins in loving family attachments, spreads outward into personal commitments and relationships through civil society and its organizations, reaches further outward toward broader regional affinities, and concludes in a national identity. . . . So my challenge to all of you, today, is to embrace these forms of new, bottom-up ways of achieving shared objectives through our institutions of a true civil society. Encourage the new generation to commit to a true civil society. . . .

“Shared human ideas of expanded freedom, expanded opportunity in education, entrepreneurial activity, and electoral participation, are worthy of the renewed commitment of all of us who are participating in this important convocation of civil society leaders committed to our shared objectives of a unified Korea and a prosperous civil society on the entire peninsula.”

Other forums being hosted by the Global Peace Foundation in partnership with Korean government ministries and civil society organizations include “The Role of the Republic of Korea in Sustainable Development” and “Global Peace Economic Forum: Economic Implications of North-South Korea Unification.” A “Leaders Assembly of Action for Korea United 2015” and “One Dream One Korea Unification Concert at the Seoul World Cup Stadium are also scheduled as part of the seventieth anniversary commemoration.