Experts and Policymakers Gather in Seoul for Korean Unification 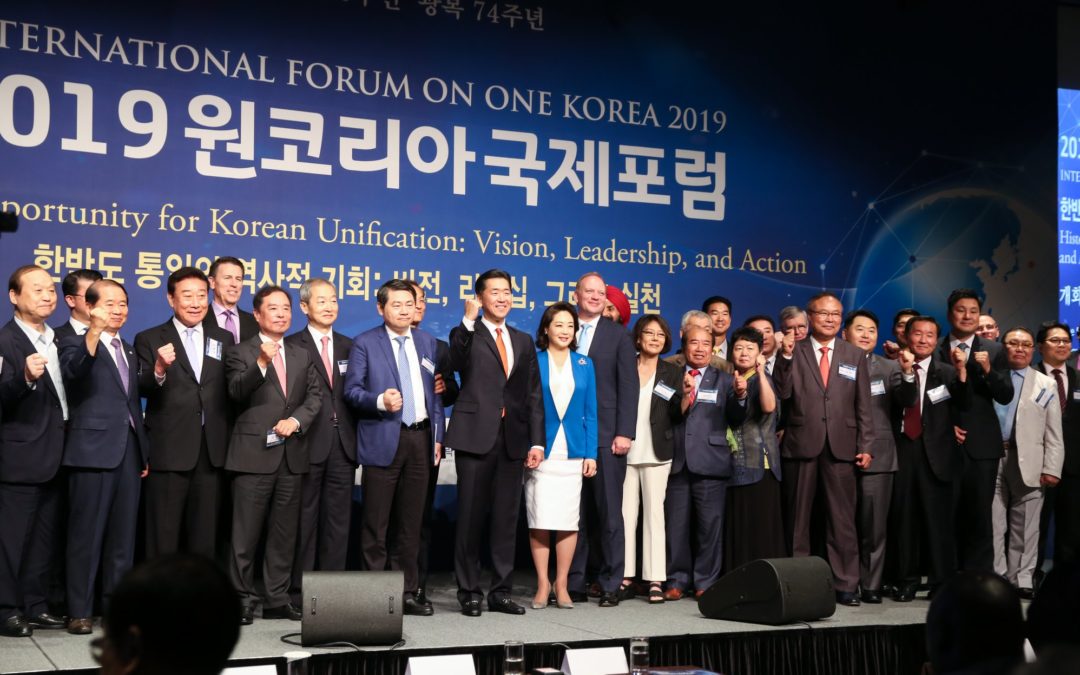 The following article by Park Ji-won for The Korea Times covers the International Forum on One Korea 2019 hosted on August 14 in Seoul where civic activists, leaders, policymakers, and experts shared insights into a comprehensive strategic framework for reunification.

Civic activists and experts discussed ways to seek unification of the two Koreas amid rising tensions in the region at an international forum Wednesday, after a series of North Korea’s launches of alleged short-range missiles in recent weeks. The convention was held marking the 100th anniversary of the March 1 Independence Movement that took place in 1919 during Japan’s colonial rule and the 74th anniversary of liberation from Japan in 1945.

A total of 400 participants from across the world, including security and North Korea experts and civic activists, took part in the International Forum On One Korea. Held under the theme “Historic Opportunity for Korean Unification: Vision, Leadership and Action,” it was hosted by the Global Peace Foundation (GPF), a nonprofit organization, at the Plaza Hotel on Wednesday.

High-profile panelists from all levels of society here as well as political, religious and academic leaders from overseas joined special sessions in three specific fields ― a new unified Korea and economic opportunity, denuclearization and lasting peace in the context of a unified Korea and North Korea religious freedom and human rights advocacy ― to find ways to foster unification and come up with a consensus on the matter.

Notable speakers included Kim Byung-joon, former chairman of the main opposition Liberty Korea Party’s emergency body; Ahn Ho-young, former ambassador to the U.S. and president of the University of North Korean Studies; Huiyao Wang, founder and president of the Center for China and Globalization, a Beijing-based think tank; William Parker, president and CEO at the East-West Institute, a New York-based think tank; and Nicholas Eberstadt, chair of the Henry Wendt in Political Economy at the American Enterprise Institute.

During a debate on economic opportunities in the North, Park Chong-soo, an adjunct professor at Sogang University and a member of the Presidential Committee on Northern Economic Cooperation, stressed that the realization of unification is a diplomatic issue which cannot be achieved through inter-Korean relations only.

Claiming that the North is trying to make its economic system similar to that of Russian President Vladimir Putin, Park highlighted that “If the U.S. does not take some actions on the North by the end of this year, North Korean leader Kim Jong-un will take his own initiative (with its market) meaning the beginning of a new Cold War.”

Li Gangzhe, an associate professor at Hokuriku University, pointed out the economic gap between Koreas can be filled easily under certain circumstances and said multinational support is necessary.

In a session on denuclearization and lasting peace, Chung Kyung-young, an adjunct professor at Hanyang University, warned the U.S. that U.S. President Donald Trump’s lack of concern about the North’s short-range missile launches is dangerous as they can target U.S. troops in South Korea as well.

Claiming the U.S. cannot achieve anything if it keeps asking the North to strike a “big deal,” Hong Hyun-ik, a chief researcher at the Sejong Institute, said the U.S. should give up the denuclearization-first approach and take a step-by-step approach after defining the meaning of denuclearization. In his opinion, a series of small deals include assurance of the end state, the North’s declaration of its nuclear-related projects and the signing for sanctions relief and improvement in relations.

Koh Yu-hwan, a professor of North Korean studies at Dongguk University, pointed out the denuclearization process, bartering denuclearization with a peaceful regime, is not working as the North has nuclear weapons and sees its relationship with the U.S. as hostile.

Kim Jae-bum, vice president of the Korean-American Association, insisted that it is necessary not only to give North Koreans freedom of religion, but also convince them of the importance of religion.

Meanwhile, GPF Chairman Moon Hyun-jin urged Koreans to take the initiative in breaking the political difficulties including the North’s missile threats and the current trade war between South Korea and Japan with the aim of unifying the two Koreas.

“The Korean people are divided under two diametrically opposed ideological, political and economic systems, with rival governments in a continual state of war. We, as Koreans, need to recognize the futility of this reality and seek to create a new one,” Moon said in his keynote speech.

“It is our calling and our destiny as Korean patriots, to be the agents of change who can spark a new tomorrow by realizing the dream of a united Korea that will benefit all humanity in the spirit of Hongik Ingan,” he said, adding that the countries’ unification could end the threats to peace and security in East Asia and will greatly benefit the world as a result. Hongik Ingan is a slogan translating to “live and work for the benefit of all mankind.”

The GPF is an international nonprofit organization with headquarters in Maryland in the U.S. and initiatives in 23 countries. The chairman’s father, Moon Sun-myung, founded a religious movement known as the Unification movement.

The GPF has been holding such international conferences throughout the world; the first one was held in the Philippines in 2009 and others have been hosted in the U.S., Kenya, Malaysia and Paraguay. It received a special consultative status in June from the United Nations Economic and Social Council responsible for discussing global economic and social agendas, and coming up with policy recommendations for U.N. member states while partnering with the U.N.’s Department of Public Information since 2016, contributing to the development, implementation and monitoring of agenda items agreed on by U.N. member nations.