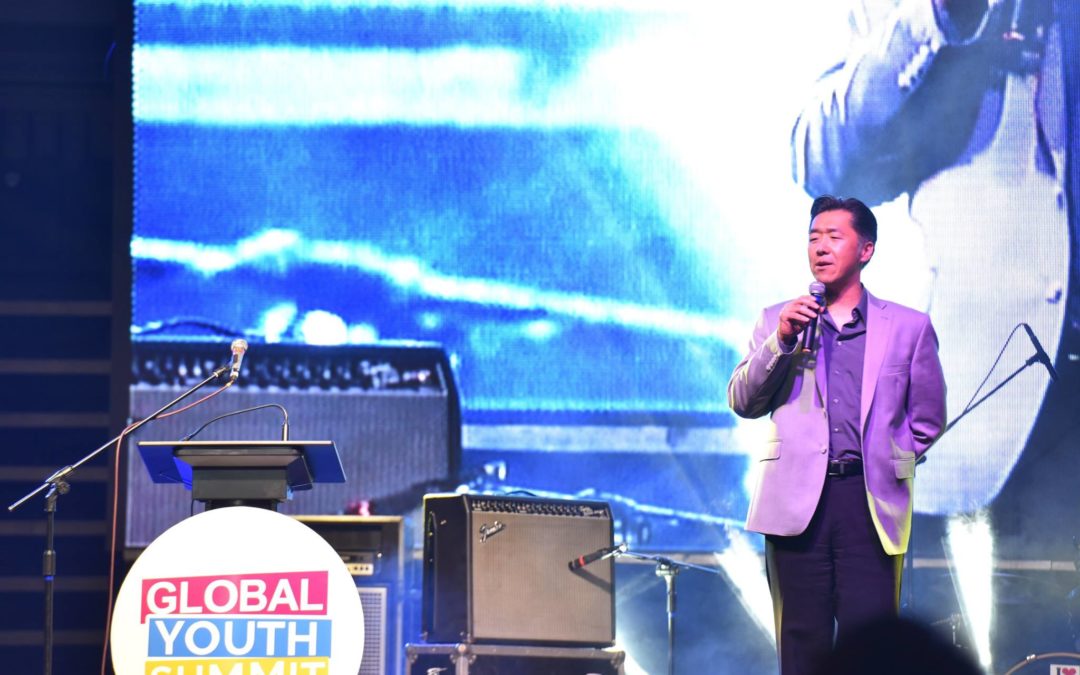 Hello Manila! It’s a tremendous honor for me to come speak to a bunch of young people. As you all know, we just completed the 7th Global Peace Convention where I had an opportunity to meet many older people from all around the world. Us older guys represent the present and the past, but you young people represent the future.

So when I was given this opportunity, I jumped at it, because if we can inspire the next generation to dream–not just a small dream, but a big dream–it can change and shape the landscape not only of this nation of the Philippines, not only East Asia, but all Asia. And not only all Asia, but the entire world, because the circumstances today allow such dreams to become a reality. 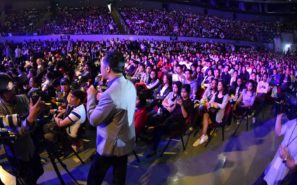 Many times as I speak to people from around the world, I give a quote–a profound quote–given by a very influential figure in the heartland of Asia. His name was Genghis Khan. He said, “If one person dreams a dream, it is but a dream. But if a thousand people, if all the people of the world dreams the same dream, then that dream becomes a reality.” This is a time in which the 7 billion people of the earth should dream the same dream, a dream to bring peace on Earth through a vision that can unite the human family that has been suffering for millennia. It is a visceral vision that’s rooted in fundamental truths that we can all, regardless of culture, background, ethnicity, or nationality, relate with. And what do you think that dream is? One Family under God!

Imagine if everyone can make that dream their dream. That’s what the Global Peace Foundation is seeking to build because its founding vision is “One Family Under God,” one family at a time.

One of the reasons why I like the Philippines is because you already have a culture that resonates with this vision. You’re a nation that is deeply rooted in faith and understands the importance of the family. The family represents the most important social unit in society. If the family goes awry, society goes awry. You recognize this. Thus, you have the foundation in which you can make this truth your own. 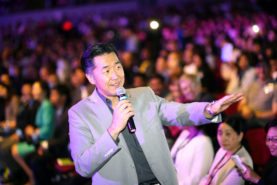 This vision can not only have tremendous impact in this nation of the Philippines but eventually Southeast Asia and the world. Why? Because Southeast Asia is going to be that influential. You have everything here. You have moderate governments. You have an inclusive social and religious environment. This is especially relevant at this time with the global war against terror, which is turning into something that looks very much like inter-religious conflict, which is the worst of conflicts that humanity can engage in.

At the same time, you are at the center of the most dynamic regional trade zone in the world. If the Philippines can build a national model of economic, social and political transformation, the impact the Philippine islands can make to the rest of Asia, especially starting from Southeast Asia, cannot be measured. It will have tremendous impact.

Now although I look at the Philippines as my second home in Asia, I was born in Korea. Is Korea a united nation or a divided nation? Of several nations that were divided after WWII, only Korea remains divided. One thing you have to understand is that this division was not the wish of the Korean people. Korea faced many of the experiences that most of Asia experienced, including the Philippines. 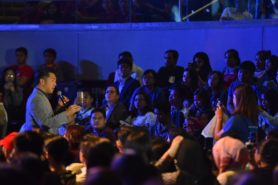 Korea was under the colonial dominion of the Japanese. After World War II, the Korean people had the opportunity to fulfill a 5,000-year-old dream, which was to create an ideal model nation rooted in their founding ideal of Hongik Ingan, which stated that the Korean people had a divine mandate from Heaven to build a nation that can serve all of humanity. As a student of history, who studied all the civilizations that are studied, I know of no ancient civilization that had such high-minded ideals, that believed that they were meant to serve the rest of humanity. Thus, the Korean people, although we are an ancient civilization, never invaded others. Although Korea, being sandwiched between China and Japan, was invaded countless times, the Korean people never invaded our neighbors. We tried to build an ideal nation because of this heavenly mandate, and with the end of WWII, for the first time in our history, we received the freedom to be able to do so. But that dream was taken away as Korea was sucked up into the Cold War geopolitics of that age, and an unnatural division was created, arbitrarily separating the Korean people, the Korean family, and the Korean Dream.

This is a time in which the world is moving from the Atlantic sphere to the Pacific sphere. This is a time when Asian stories should stimulate the hearts and minds of people, not only here in Asia, but around the world. And the Korean story is that Asian story. Korean Unification will represent the end of the colonial era that had plagued Asia. It will also represent the end of the Cold War that had plagued our landscape. It will also mark the beginning of a new era, that represents the era of Asia.

I wrote a book recently. It’s called Korean Dream. There, I cite the writings of Tagore, who won the Nobel Peace Prize in literature, where he wrote, “Korea at one time was the lamp-bearer of Asia. And Korea waits for that light to be lit once again for all of Asia and the world”. Well, ladies and gentlemen, this is a time in which that light shall be lit again through all of you dreaming that same dream – a dream to build One Family under God. The greatest impediment to the fulfillment of that dream is peace in the most dynamic region of the world, where the world is now moving towards, which is here in Asia.

The unity of North and South Korea is the civil rights issue of this age. It should not just be the dream of all Koreans, but of all Asians, and most of all, of everyone around the world.

For young people, you need passion and you need dreams. And as I explained, this is a time to dream big, bold, hairy dreams. 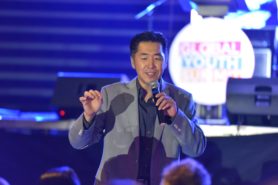 Hemisphere. The history of the Philippines is very tied to the West, unlike Asia proper. It was under Spanish colonial occupation and eventually within the US territorial relationship. So at this time, when there is a shift moving from the Atlantic to the Pacific Rim, these two nations, from the Northern hemisphere and the Southern hemisphere, will play an increasingly important role.

This is where I’m going to inspire you young people here in the Philippines. It is this opportunity that affords you the chance to be leaders in your own right, in whatever capacity, however small or large. But you have to dream. It is dreamers that are able to see opportunities and capture and bring to reality possibilities. It is those who are willing to dream that can make opportunities into substantive reality that brings about transformation in this world. If anything, I’m hoping that this talk will give you the chance to stop and think about whether or not what is motivating me today is really capturing the opportunity that fate has provided, not only to myself, but to this nation, this region, and this world. 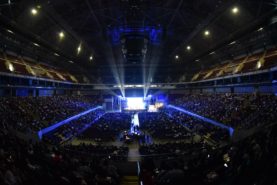 So young people, be the dreamers that define what this century will be. Be the dreamers that can realize the dreams that have animated humanity ever since our creation. Be willing and bold enough to dream the greatest dream of all – the dream to build One Family under God.

Can you do that, yes or no? Very good. Thank you very much!