Dr. Hyun Jin P. Moon Editorial Published in Newsweek: WHAT THE U.S. IS GETTING WRONG ON NORTH KOREA 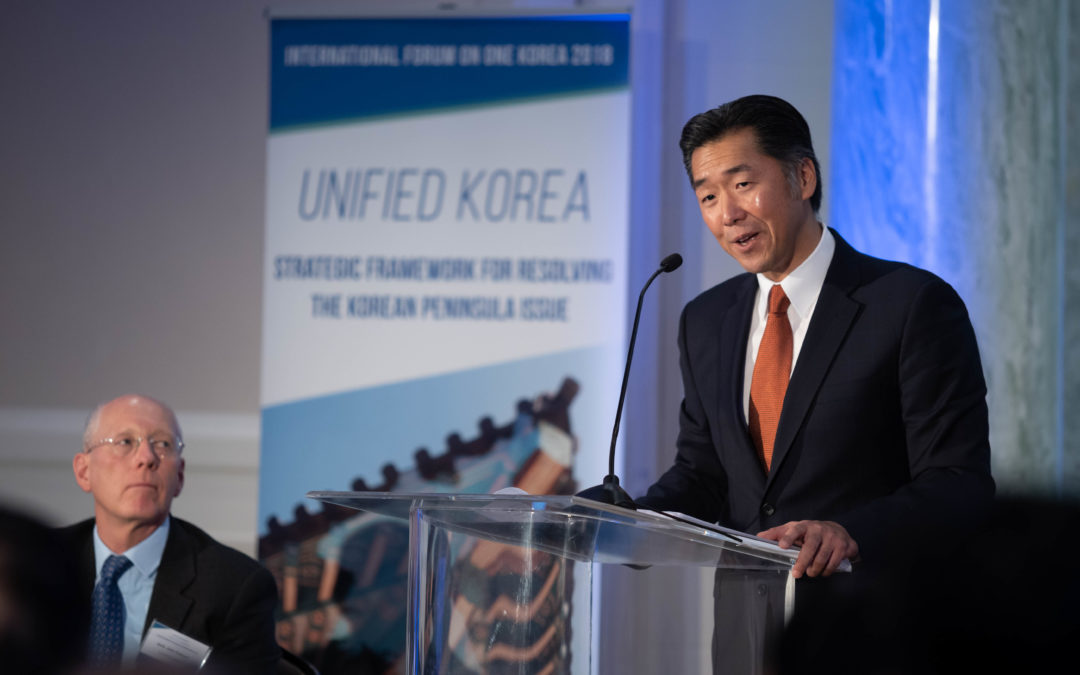 Dr. Hyun Jin P. Moon, author of Korean Dream: A Vision for a Unified Korea, had an editorial published on February 22, 2019 in Newsweek. The article addresses the importance of a long-term strategic approach for the future of the Korean peninsula that focuses on reunification.

Dr. Moon will be addressing the Global Peace Conference 2019 at the end of February.

You can find Newsweek’s full article below or here.

With the second summit between President Donald Trump and Chairman Kim Jong Un of North Korea happening at the end of the month, it is time to consider whether narrow bilateral negotiations on denuclearization are likely to produce results. If recent revelations are indicators of the North’s intent, the prospects are not hopeful. The only reason for this summit is the lack of substantial progress on denuclearization from the first meeting in Singapore last June, whose sole result was to relieve the global pressure that the Trump administration was able to put on Kim Jong Un.

There are two fundamental, flawed assumptions in the current U.S. approach. First, it assumes that denuclearization could be narrowly negotiated with Kim Jung Un. To the Kim regime, its nuclear weapons program is not only a guarantee to its survival, but a source of national pride and achievement. Unlike the South’s “miracle on the Han,” the North’s only globally recognizable achievement, although untenable, is its nuclear program. Like past agreements, the North will offer marginal concessions while maintaining its nuclear store.

Second, the U.S. fails to see the nuclear issue within the larger strategic framework of unification. It needs to understand that Kim and the North Korean ruling elite are an inter-generational dictatorship that have not abandoned the dream of Kim’s grandfather, “Eternal President” Kim Il Sung, of a united peninsula under the ideology of the North. They have a larger strategic view that wants to reap the benefits of the South Korean economy married with their nuclear power.

And what they can no longer achieve by force they will seek to achieve by geopolitical maneuvers and exploiting the hyper-divisive ideological divide in South Korea. They will appeal to the anti-Americanism and anti-Japanese elements of the progressive Left in the current South Korean administration under the banner of Korean self-determination. This will slowly erode the fragile alliance in Northeast Asia between the U.S., Japan and South Korea.

If the U.S. was to remove its troops as part of its narrow bi-lateral deal with North Korea, it will seal the deal for the North to make moves to secure its ultimate prize—South Korea. Korean unification is an issue that is already on the table. It was featured as a shared goal of the two parties in official statements after the summits between Chairman Kim and South Korea’s President Moon.

With its narrow focus on the singular, unachievable goal of full, verified nuclear disarmament, the U.S. is in danger of missing the boat as much wider issues are now in play with potentially dangerous geopolitical consequences. With an impetus towards unification underway among the Korean parties, the most important strategic question will become, “What sort of unification will it be?” This will be the new battleground and where debate should be focused. The U.S. needs to recognize this emerging reality and adapt its policy accordingly.

A unified Korea aligned with fundamental human rights and values should become the clearly stated and actively pursued policy of the U.S., South Korea, and their allies. It would provide a clear end goal for Korea policy and a framework for all negotiations with North Korea. Most importantly, it would break out of the usual vicious cycle of threats, followed by peace talks and by concessions to the North. It would deprive the North of the initiative that it has typically enjoyed in all ‘peace’ talks to date.

The geopolitical cost to the U.S. of neglecting such a policy is potentially disastrous. If an unholy alliance of the regime in Pyongyang and South Korean progressives prevails, the peninsula will fall under the dominance of an unreformed dictatorial regime. The U.S. presence will no doubt be pushed out. Korea will sit firmly within the sphere of influence of authoritarian China, our ally Japan will be isolated and the U.S. will have lost an important democratic partner in East Asia.

The timing of the summit could not be more significant in this context. The next day, March 1st, is the centenary of the Korean Independence movement’s 1919 proclamation of the Korean Declaration of Independence in peaceful mass rallies across the country. Among the drafters of the declaration was my great-grand-uncle, Moon Yung-guk.

These patriots aspired to create a nation that was “united, independent, and free.” Korean unification should be peaceful and align with the ideals and principles they proclaimed. They wanted freedom from Japan, not enmity towards it. Rather, they wanted to create a new nation that drew upon Korea’s shared cultural history and values.

At the heart of this history is the Hongik Ingan ethos – living for the greater benefit of all humanity, as I describe in my book, Korean Dream: Vision for a Unified Korea. It was a motivating ideal for the Independence movement. Korean independence leaders in the U.S. recognized that Hongik Ingan resonates with the universal principles expressed in the U.S. Declaration of Independence. Their aspirations were linked to America’s founding ideals.

Those aspirations are still unfulfilled today. The launch of an active pursuit of peaceful Korean unification on the basis of the principles they proclaimed would be a fitting way to mark this centenary. Those principles long predate the current ideological division touching the heart of Korean identity.

Such an approach is also practical politics in the U.S. interest. Its ultimate success would create a new nation in East Asia aligned with the same principles and values that animated the American Founding. It would be an important ally against the rising global tide of authoritarianism.

Dr. Hyun Jin Preston Moon is Founder and Chairman of the Global Peace Foundation and author of the award-winning book, “Korean Dream: A Vision for a Unified Korea.”

The views expressed in this article are the author’s own.