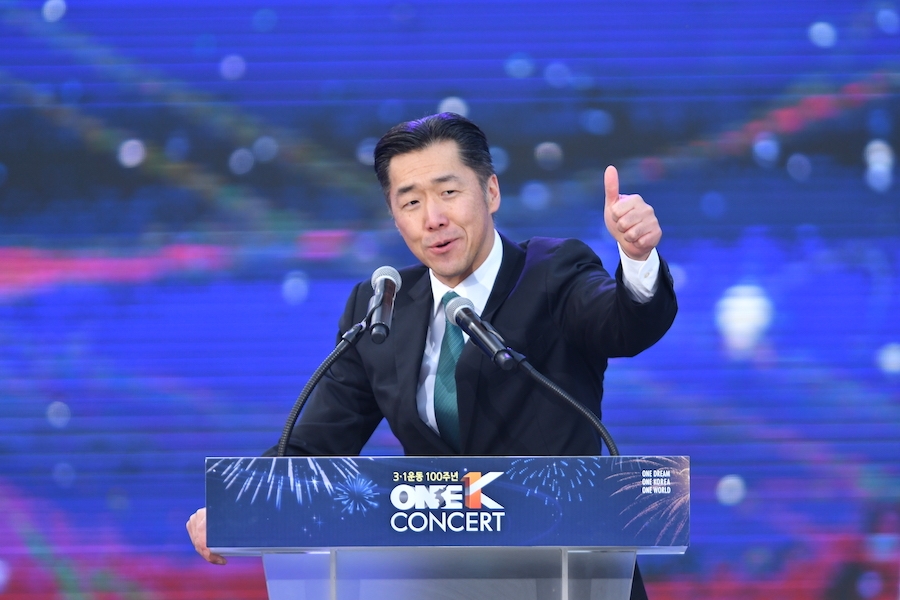 Ladies and gentleman, we are gathered here at an auspicious moment in the history of the Korean people.

100 years ago, our ancestors gathered together on this peninsula to declare to the world, a dream, a dream that eventually inspired the 20th century.

Inspired by the high ideals of our founding, rooted in the Dangun mythology, encapsulated in the ideal of Hongik Ingan, they had a high dream for Korea and what Korea represented to the world.

Breaking with every challenge of authority in the past, they gathered here, 2 million Koreans, 10% of the entire Korean population, on this peninsula, to peacefully demonstrate their right to fulfill their providential destiny to create an ideal nation that can serve all mankind.

Thus, the declaration of independence that the Koreans offered at that time, did not seek hatred and enmity towards Japan, nor did it seek retribution towards Japan or any colonial power. It sought to build a better world, a world rooted in friendship and mutual understanding that could inspire the entire world to peace.

What happened on this peninsula 100 years ago inspired movements for national independence in the 21st century: Gandhi’s movement of non-violent protests against the British colonial empire that brought about Indian national independence; the peaceful non-violent protests that inspired the civil rights movement in the United States where Martin Luther King Jr’s dream united and galvanized the American people behind the ethical framework of his original dream, bringing an end to the ugly chapter of racism in that nation; the apartheid movement in South Africa, where once again through non-violent protest to the horrors and injustice of the apartheid regime, brought an end, and a beginning, of a new African dawn with the creation of a new South Africa.

The inspiration behind these movements was what our forefathers initiated 100 years ago.

As we start this new century, let us once again be reminded of the sacrifices that our forefathers were willing to make, for a dream, a dream of creating an ideal nation that can bring world peace to the world.

That dream is the Korean Dream.

And that dream should be the dream that resonates and inspires a whole new generation, not only of Koreans but of all people around the world to dream of a better world of peace, harmony, and co-prosperity for all nations around the world.

Don’t you think so?

This is the time in which your generation could make a change.

The reason why music is so important is that it is the best way to encapsulate a message and bring it to the masses.

Don’t let anyone discount the passion and conviction of young people that are motivated by a dream.

I’m reminded of a recent American history, where the Vietnam War came to an end, because young people, especially musicians, were inspired by the anti-war message and put it into song, and then eventually brought a cultural, historic revolution that brought about an end to the Vietnam war.

Let us dream a moment. What happens if the vision of the Korean Dream gets translated into song in all the different languages of the world? Inspired by Korean Kpop artists, artists around the world singing about Korean unification rooted in the Korean Dream, imagine what kind of global revolution that can create?

Because, as I say many times, quoting the immortal words of Genghis Khan, “If one person has a dream, it is but a dream, but if everyone shares that dream, it becomes reality.”

So, as we gather here as this auspicious moment, let us remember that. Let us all become the owners of the Korean Dream.