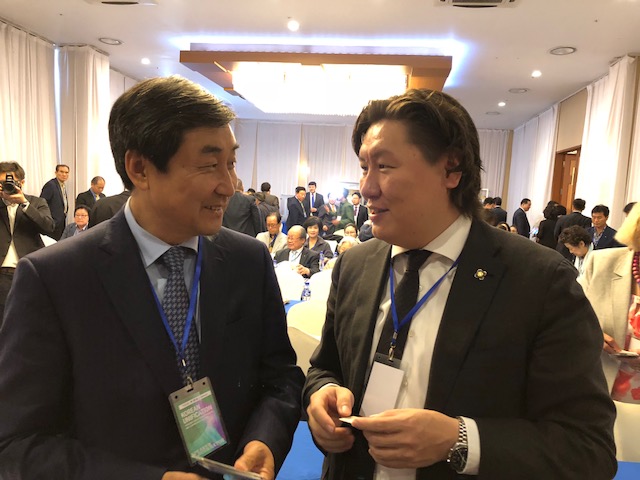 In early March, there was initial progress towards a summit between North Korea and the United States. Within 12 hours of the announcement, former president of Mongolia Tsakhiagiin Elbegdorj tweeted “Making a proposal,” on his Twitter account. He proposed Mongolia as the summit location, calling it “the most appropriate and most central location.” Although Mongolia lost in the end to Singapore, its special interest in the reunification of the Korean peninsula received focused attention at the “International Forum on Korean Unification” that I attended in the capital city of Ulaanbaatar.

—Young Jong Lee, Special correspondent on Korean reunification and North Korea and the head of the Unification and Culture Institute

This article was published in the JoongAng Daily by special reporter Young Jong Lee on the recent International Forum on Korean Unification held in Ulaanbaatar, Mongolia. 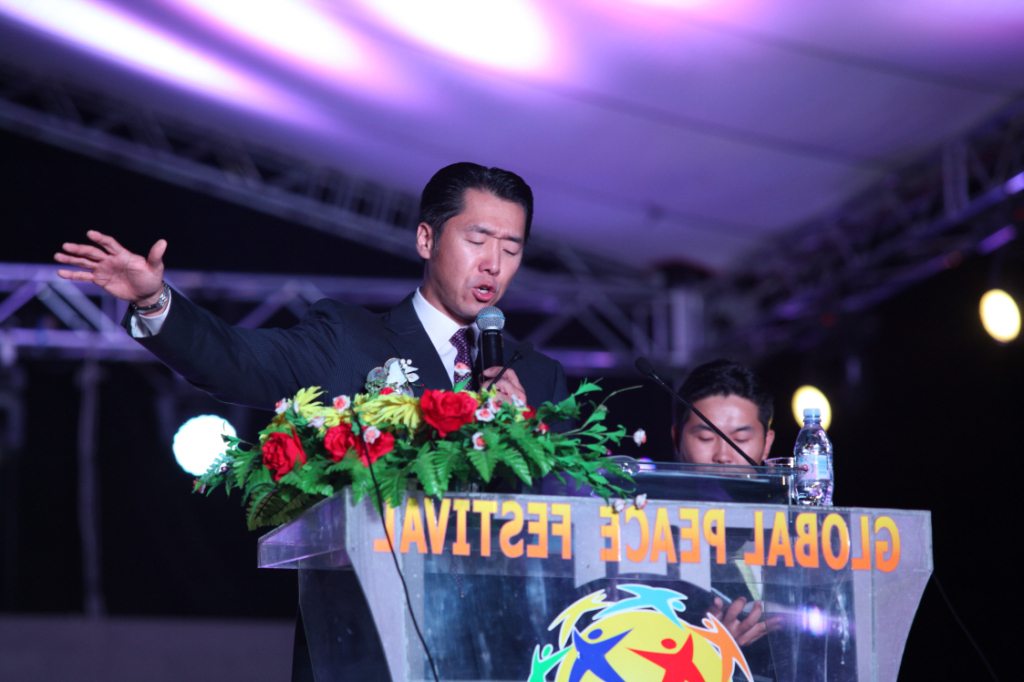 Dr. Hyun Jin P. Moon has encouraged Mongolia’s involvement in Korean reunification and Northeast Asian peace since 2011. At the Global Peace Leadership Conference that year he said, “Mongolia’s role is crucial.” In his book, “Korean Dream: A Vision for a Unified Korea,” he pays special attention to Mongolia’s historic connections and experience of transformation, arguing that Mongolia can help cultivate diplomatic and track-two relations as well as generate innovative solutions in the process of reunification.

Dr. Moon has continued to push for Mongolian engagement through grassroots initiatives like Action for Korea United and the One K Global Campaign, and policy maker and expert forums such as the one covered in the JoongAng Daily article.

Here is the full article translation from Korean: 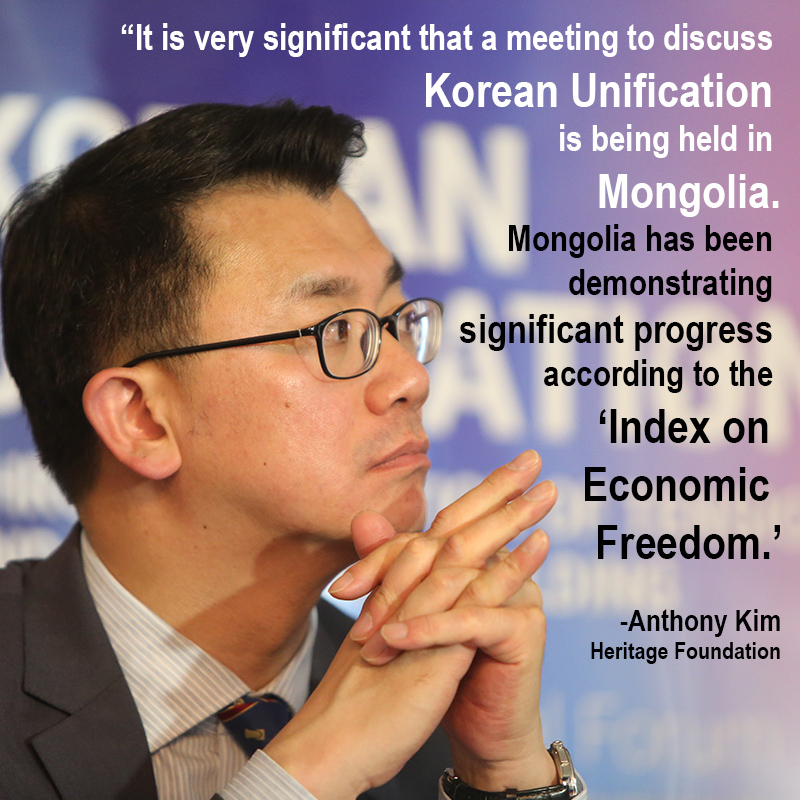 “If two Korean Americans, Andrew Kim and Sung Kim, have played key roles in bringing about the summit meeting between North Korea and the United States, we are about to see the ‘entrance of another Kim.’” At the Blue Sky Hotel in the heart of Ulaanbaatar where the Mongolia International Forum was held on the 7th, I met Anthony Kim, a researcher at the Heritage Foundation in the United States. He told me to keep my eye on Yong Kim, Chairman of the International Bank for Reconstruction and Development (IBRD). Mr. Kim is referring to possibilities if relationship between North Korea and the United States rapidly improves and takes shape. International entities are prepared to invest significant funds on cooperative development projects and Chairman Kim will hold the key. Chairman Kim, who also served as President of Dartmouth College in the United States (2009-2012), was selected by Time Magazine as one of 100 ‘Most Influential People in the World’ in 2006. He took the helm of IBRD in July of 2012. During his presentation at the forum, Anthony Kim stated, “It is very significant that a meeting to discuss Korean Unification is being held in Mongolia.” and that, “Mongolia has been demonstrating significant progress according to the ‘Index on Economic Freedom’ created by the Heritage Foundation.” His presentation urged participants to focus on hidden potentials of the region that was a candidate to host the summit between North Korea and the United States.

The forum, co-hosted by the Global Peace Foundation (GPF-Korea, Chairman In Taek Seo) and the Mongolia Forum for Korean Unification (Chairman P. Ochirbat, former President of Mongolia), was attended by approximately 40 experts on Korean issues from Korea, Mongolia, United States, China, Russia, Japan and others. The event was held over two days from 7th – 8th and focused on ‘Korean unification through reduction of tension and confidence-building’. The forum was also attended by local Korean organizations including the Mongolian chapter of the National Unification Advisory Council and Korean unification related organizations such as ‘Action for Korea United’ and others.

Even though Mongolia lost the bid to host the summit between North Korea and the United States to Singapore, the Unification Forum shed new light on its hidden potentials. 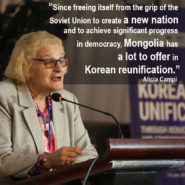 In her presentation, Alicia Campi, founder of Asia Politics and History Association, emphasized, “Since freeing itself from the grip of the Soviet Union to create a new nation and to achieve significant progress in democracy, Mongolia has a lot to offer in Korean reunification.” Jamyan Battur, professor at the Mongolia National University showed his optimism, stating, “In 1991, the first President of Mongolia, Ochirbat, visited South Korea for the first time and proposed tax exemptions for Korean companies and joint development of Mongolian mines.” He continued, “Mongol, North and South Korea relations required cooperation between three nations. Recent progress in North

Jin Shin, professor of Political Science and Diplomacy at the Chungnam National University said, “In Korea, there is a saying ‘The hawk catches the pheasant.’ President Trump is the only one that knows how to handle the wild Kim Jong Un.” He stressed that South Korea must grab this opportunity. Professor Shin stated, “Korean reunification can be a model which demonstrates that in a battle with the last communist country in this world, democracy prevails.” He added, “It can provide hope to citizens of dictatorial countries by demonstrating that the universal value of humanity is still alive in a country that suppresses human rights.”

Jong Kul Lee, a Republic of Korea National Assembly member from the Minjoo Party, took issues with President Trump’s emphasis on South Korean and Japanese contribution for subsidizing North Korea’s infrastructure development. Assemblyman Lee stated, “It is difficult to think that such a position is reasonable,” and emphasized, “The United States must actively participate in providing economic support and compensation to North Korea.”

At the forum, a Mongolian anti-nuclear non-governmental organization (NGO) “Blue Banner” also participated and submitted a participant resolution on dismantling North Korean nuclear capabilities. This organization was able to obtain the United Nations’ approval on “Mongolia’s standing as a non-nuclear state” in 1998.

Mongolia is a landlocked country in Central Asia, with an impressive history with Genghis Khan establishing an expansive empire in the early 13th century. But, after becoming the second communist country in the world following the former Soviet Union, Mongolia suffered systemic issues and economic hardships. They have maintained friendly relations with North Korea after establishing diplomatic relations in 1948. They established full diplomatic ties with South Korea in 1990. Since then, they have maintained equal relationships with both North and South Korea.

Many Mongolians now study and work in South Korea, especially as foreign exchange students and foreign workers. A diplomatic official stated, “150,000 Mongolians are living overseas. It is not a small thing that about 30,000 of those Mongolians live in South Korea.” Professor Jin Shin observed, “At Chungnam National University, there are about 200 Mongolian students that have gone through our Bachelors, Masters or Doctorate programs.” He continued, “A majority of them are working in Mongolia as college professors, civil servants and journalists.” These conditions are made possible by long standing historical relationships strengthened by the fact that Mongolia and the Korean peninsula share Ural-Altaic languages. The close connection between North and South Korea and Mongolia is symbolized by the ‘Mongolian Spot’.

Mongolia continues to value its historical friendship with North Korea. But it has shown that it will say what it needs to say about the Kim Jung Un regime. In 2013, then President of Mongolia Elbegdorj sent shock waves when he delivered a speech given at the Kim Il Sung University to the North Korean government. President Elbegdorj said to the students, “No tyranny can continue to exist for eternity.” He emphasized that, “Living freely is the desire of all human kind and this is the eternal strength.” Adding that, “Mongolia holds human life with the highest value,” mentioning that Mongolia abolished the death penalty in June of 2009. This speech was seen as a rebuke to the Kim Jung Un’s regime and highlighted the reality of the human rights violations in North Korea.

Providing land for propaganda broadcasts to North Korea, A place for Japan and North Korea talks.

Global Peace Foundation is an international non-sectarian, non-partisan, nonprofit organization, which promotes an innovative, values-based approach to peacebuilding, guided by the vision of One Family under God.  GPF engages and organizes a global network of public and private-sector partners who develop community, national, and regional peace building models as the foundation for ethical and cohesive societies. Dr. Hyun Jin Preston Moon is founder and chairman of the Global Peace Foundation.