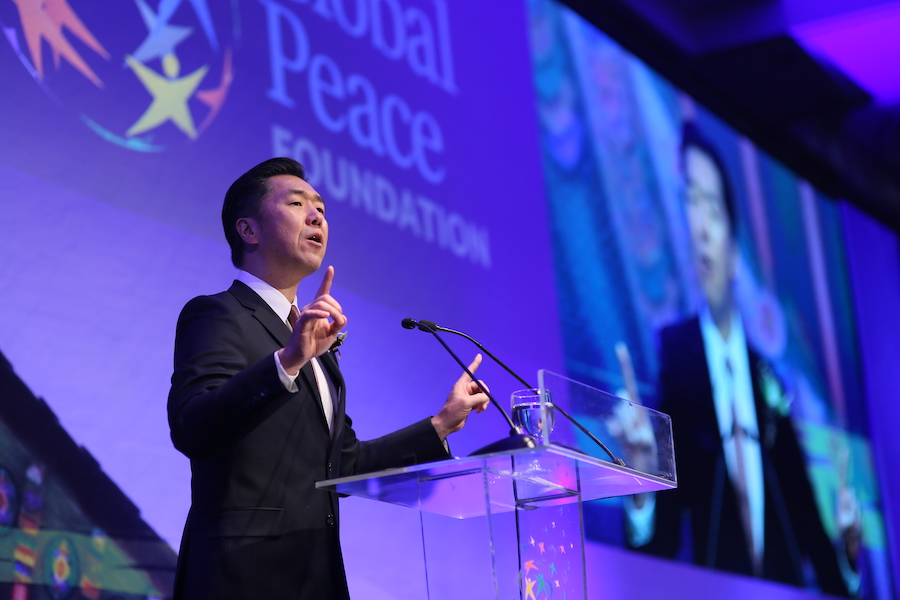 Dr. Hyun Jin P. Moon called for bipartisan support to achieve peaceful reunification on the Korean peninsula in an interview with Park Ji-won for The Korea Times in the wake of the Global Peace Convention 2019 hosted in Seoul, South Korea from February 26 to March 1. Leaders from around the world convened under the theme, “Korean Dream: Vision for a Unified Korea.”

“What’s more important for South Korea is to have an overarching, strategic vision that irrespective of administration, liberal or conservative, sticks to that and has bipartisan support,” said Dr. Moon in his interview. “And that’s why I wrote my book, Korean Dream.”

Dr. Moon hopes that every Korean, on the peninsula and abroad, can take ownership over the Korean Dream with a vision of a unified Korea that can bring stability and prosperity to the region and the entire world.

Read the full interview on The Korea Times.

The following is an edited version of an interview with Global Peace Foundation Chairman Moon Hyun-jin. – ED.

Q. What is your basic idea of the current political situation?

A. You could say this is a transformative moment in the history of Korea. Indirectly, the position of South Korea and North Korea is already heading toward unification. This is a concern to me in several ways, although I have been working all my life for unification, so has my father, and even my great-great uncle going all the way back to the March 1 Movement in 1919. He was one of the architects of the declaration of independence of Korea. The question is what type of unification will come about.

The fact that Moon Jae-in suggested bilateral talks between the U.S. and North Korea was a bad move; having America be front and center in terms of what is happening on the Korean Peninsula. Russia and China wanted to be involved as well. That’s why after the first summit in Singapore, the global situation that was created where the U.S. was able to get China and Russia on its side in terms of sanctions for the North eventually ended. Because the Chinese came in and they started to have bilateral relations with North Korea. Then the Russians came with bilateral relations. And then you take away the environment for the two Koreas to really build a foundation for unification.

Q. I assume you are trying to set a long-standing strategy that doesn’t change following the change of administration. In that sense, what is your organization’s idea of dealing with other countries surrounding Korea?

A. Korea is a bigger issue. So the changes of administrations in left and right has tremendous significance in terms of the inter-Korea relationship. So think about all the policies of engagement over last several decades. It is all under liberal governments. North Korea knows who its friends are in South Korea and who are its enemies. It is ironic that the stated goal of Park Geun-hye’s administration was unification. It was never able to engage with the North.

So before we ask about the changing of governments in the U.S., or China ― China won’t change. It is basically a dictatorship. Russia is a dictatorship. So those governments will not change. A bigger question for the Korean media is what about Korea? There is a reason why under conservative presidents it was never able to engage the North ― because the North will not engage them. So what’s more important for South Korea is to have an overarching, strategic vision that irrespective of administration, liberal or conservative, sticks to that and has bipartisan support. And that’s why I wrote my book “Korean Dream.”

Q. How can North Korean people participate in creating a new nation?

A. We will find ways. Let me tell you about dictatorships. The thing they fear most is their own citizens. This is the flaw of the whole bilateral approach that the U.S. thinks it can have a bilateral relationship and somehow entice Kim Jong-un to give up his nuclear arsenal. But Kim Jong-un and the Kim dynasty is built on the aura of the success of the nuclear program. Compared to South Korea, North Korea is a basket case. It has accomplished nothing. South Korea accomplished the miracle on the Han. North Korea has nothing to show to the international community except its nuclear program. It is foolish for Americans to think that North Korea will give up the very thing that is the essence of that regime.

A. You cannot whitewash history. Eventually, just like everything else, the truth will come out because there is so much historical evidence. I don’t think it is going to be that difficult to convince the North about that, because everybody will benefit. Even North Korea will benefit from unification under the Korean Dream model.

Q. When do you think the unification will happen if everything were to go perfectly?

A. It all depends on how much your generation takes ownership of this. I started this unification movement in 2010. When I started, everybody said I was crazy because nobody was interested in unification. Look how much the world has changed. And now, front and center, with even the leaders of two Koreas talking about unification indirectly. There are all the signs right now that changes are going to come. I have done everything in my power to give the tools to the Korean people to make the right decision and to take ownership of this because they can determine their future. I believe the young generation especially can bring about that transformation. I really sincerely believe that.

Q. What do you think about declaring an end to the Korean War, and the denuclearization issue?

A. The end of war declaration under the current Moon-Kim model concerns me because if there is a tacit agreement in terms of unification between the Moon administration and Kim Jong-un, the Korean people should know about it. It should be publicly stated that everybody knows about it. And then the debate should go on to ask what type of nation that should be. That conversation has not happened. This is something that’s very disturbing to me. And that’s why I am raising the issue right now ― more importantly, the discussion of what type country a unified Korea should be.

One of the big concerns, especially in the U.S., is how much Moon Jae-in is pushing and advocating for North Korea which is uncomfortable. Kim Dae-jung’s engagement policy was that he wanted to engage in sunshine. But the Moon administration is actually not just engaging, it is advocating for the Kim administration, which is amazing. Moon is the President of South Korea, and he is advocating for the Kim administration. For many Americans, this is very suspicious. So when this administration declared it was moving to end the Korean conflict, which many people in America believe means American troops will be removed from South Korea, resulting in an unholy alliance between North Korea and South Korea, moving toward a totalitarian state. This is very disconcerting to many people, including me. Moon has got to represent the interests of the South Korean people.

A. The unification movement goes all the way back in the history of my family. My great-great uncle was one of the founding architects of the declaration of independence. Many people probably don’t realize that he was the most prominent Christian pastor in Korea at that time. My father was the one who opened the door to North Korea in 1991. There is a reason why North Koreans wanted to meet my father. My family has been involved in the process for unification going back generations. My hope is that younger generations can understand this.

Q. It seems you find it rewarding to see your vision on the way to reality.

A. I am not doing this for my ego. I am doing this to fulfill something in which I have passionately believed. I don’t mind if others take its credit. My hope is that although I wrote the book the Korean Dream, every Korean can become the owner of this [future] and make it their own. I have no problem with that.

Moon is an activist supporting unification through holding seminars and cultural events as well as volunteering for impoverished countries. He also wrote a vision book, “Korean Dream: A Vision for a Unified Korea,” to help others understand his philosophy to move toward unification. His father Moon Sun-myung was the founder of a religious movement known as the unification movement.