Thank you Dr. Ryu for that very flattering introduction. First of all, let me say, while I have done a lot of research, I am not a scholar as such. So, what I’m going to talk about is not scholarly research in the narrowest sense.

My background is in journalism and publishing. So, my remarks are going to present a rather broad picture of the role that vision and principles have in the life of a nation. Particularly relating that to Korea and the idea of hongik ingan.

I will say that my wife is both Korean and a scholar and teaches at Georgetown University in Washington on Korean thought and religion. So, I learned a great deal from her. I’ve learned even more from Dr. Moon. I worked closely with him on research and preparation with him for his book, the Korean Dream, and in the course of that I learned a great deal about the importance of a vision and principles in the life of a nation and how hongik ingan serves that role in Korea.

The Case for A National Vision

For pragmatic politicians, and so called realists, the idea of a national vision seems insubstantial, rather like Marx’s concept of superstructure, things that are merely a product of more fundamental material forces. I contend on the contrary that for any nation or socio-cultural group, vision is fundamental and ever present. It’s like a guiding DNA. At times of peace and little challenge, there is often little discussion of vision, it operates on a subconscious level. But at times of transformative change, a strong sense of national vision and purpose is necessary for a country to successfully navigate the future.

This idea was strongly expressed by Dr. Henry Kissinger, who is usually thought of as an arch-realist, in a speech to the Asan Institute in 2010, where he said that questions about world order–that in considering them, “the issue always comes down to, does there exist a vision of the future and does there exist the ability and commitment to achieve it. Societies cannot simply live by consuming what they have already done. In today’s world, so many changes are taking place simultaneously that only those societies that can develop a vision for the future are going to be able to handle them.”

The many changes Dr. Kissinger referred to have been well documented and widely discussed. In the Northeast Asia context, they include developing a regional order for peace and security to replace the dissolved Cold War alliance system. 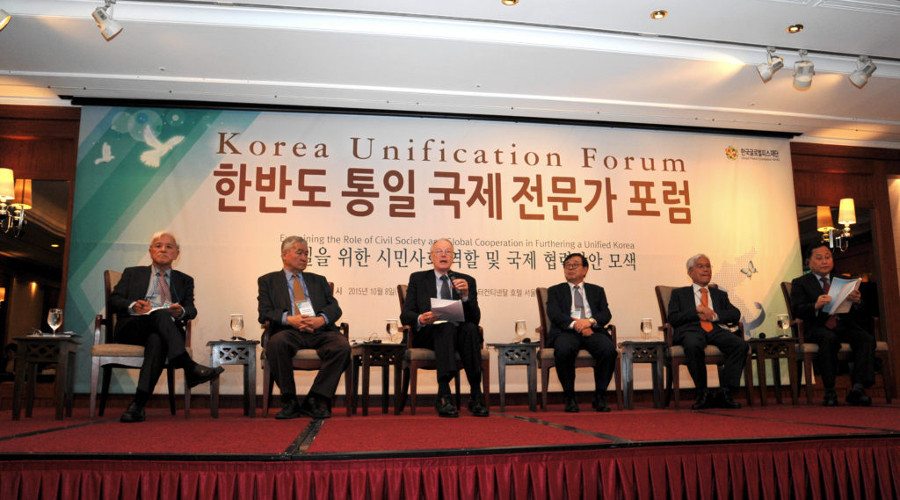 Within this context, Korea needs to develop a vision for the future that addresses two major challenges. One is the unification of the divided Korean people, and the other is the reaffirmation of Korean identity. That identity is today under siege because of the social and cultural impact of the incredible economic growth that South Korea has experienced in the past 50 years, unparalleled in human history. And we can see in various social indicators related to birth rate, divorce, suicide, the social and cultural impact of that tremendous pressure that has arisen with the speed of that growth.

Changes in cultural values don’t exists in some independent moral or spiritual realm. They have practical consequences. So, a growing number of Korean old people are living and dying alone. The low birth rate is creating labor shortage, which is a problem in itself. Which then adds to the problem of how you are going to pay, with a shrinking labor force, for the welfare of a growing retired population.

All of these changes are eroding the traditional sense of a Korean identity. But nothing well-defined is replacing it. And this creates feelings of deep unease, that an incident like the Sewol ferry tragedy caused to burst out into national soul-searching. Such moments cause Koreans to look in the mirror and ask, “What sort of people are we? What is our Korean identity?”

The two challenges of reunification and Korean identity are intimately interlinked. Once we understand that unification is not just a matter of politics and economics, but is the coming together of a separated people, then it becomes clear that a strong sense of Korean identity is an essential component for unification to take place.

That identity has been fashioned through a long history of independence and stability that lasted almost a thousand years from the start of the Koryo dynasty until the beginning of the twentieth century.

And together with it was a strong unity and resistance to the periodic invasions that Korea faced. The seed for a vision for the future can also be found in Korean history, in the ideal of hongik ingan that is deeply embedded in the story of Geojeoseon’s founding a thousand years ago.

Living for the Benefit of Humanity

The hongik ingan ideal is also important within South Korea as well. It can offer a national vision that rises above the narrow divisions of party politics or regional rivalries by presenting a higher purpose to unite around and work for.

Hongik ingan, living for the benefit of the greater humanity, has been a guiding principle in Korean history. Together with its related ideas, hongik ingan is an expression of universal principles that is remarkable for the early origin of its global perspective.

Hongik ingan was an especially powerful motivating idea for the independence movement under Japanese colonialism and for the founders of the Republic of Korea in 1948. Kim Gu, the independence movement leader in Shanghai expressed it in this way when he wrote, “I wish my nation would be a nation that doesn’t just imitate others, but rather, be a nation that is the source of a new and higher culture. And thus true world peace would come from our nation. I wish peace would be achieved in our nation and from there to the world. I believe this is the hongik ingan ideal of our national ancestor Dangun.”

This principle, hongik ingan, has the potential to connect Koreans today with their past and provide a unifying bridge into the future with a clear purpose and direction for the nation.

Because of its historical roots, it can be an idea that transcends the ideological division that has set the two Koreas against each other. That division is, after all, only seventy years old. The hongik ingan ideal and the common history and culture of Koreans goes back a thousand years.

The hongik ingan ideal is also important within South Korea as well. It can offer a national vision that rises above the narrow divisions of party politics or regional rivalries by presenting a higher purpose to unite around and work for.

In the subsequent period, South Korea built itself up to resist any further attacks from the North and to develop itself economically. Because economy was a focus again, there was little time for reflection about questions of identity and national vision beyond creating just a strong economy. Now, today is a serious time to reflect on these issues when growth is no longer an end in itself, but is raising serious questions among South Koreans about what it has cost.

One issue that must be addressed as Korea goes forward, and if hongik ingan is to serve as a central principle for a national vision is history education in high schools and colleges. I hear from Korean educators that young Koreans are woefully ignorant of their history. And this has all sorts of complicated reasons such as lack of agreement on a curriculum or that it is not compulsory. In the United States there are serious debates over what should be in the history curriculum, but everyone agrees that young Americans should learn American history. Young Koreans need to learn their own history.

A Model for the World

Let me conclude with one further thought, an idea, perhaps the greatest threat to peace and prosperity in the world today is identity-based conflict. Such conflicts have sprung up globally in the wake of the Cold War. And particularly threatening are those that are fueled by extreme religious ideologies which recognize no political boundaries and give their form of moral sanction to violence. Ultimately, the antidote to such groups must be a transcendent vision of humanity as One Family united under a common roof of universal principles and shared values that are shared by all the great spiritual and ethical traditions.

That vision in turn must give rise to a global ethic, which is not just a matter of discussion among theologians and philosophers, but is expressed in the moral practice of families in communities, societies, nations and in relations between nations.

I want to suggest that Korea can make a major practical contribution to the emergence of such a global ethic if it creates a national vision based on hongik ingan, and on that basis reunites the Korean people of the North and the South.

Such an achievement would resolve a major obstacle to peace and prosperous development in Northeast Asia with positive implications for the rest of the world.

To conclude, in the story of Dangun, hongik ingan is linked closely with the principle of jae sea i hwa, or governing the world by law. This is not laws enacted by state, but universal laws that reflect universal principles.

We can understand the two concepts, hongik ingan and jae sae i hwa, taken together, as an exhortation to govern the world through laws that reflect universal principles in order to form citizens who can act in a way that can benefit all humanity. This is indeed a noble aspiration and one that Koreans should feel proud to own and to make a reality in a restored homeland. That is a future that I hope at least some of us can see.