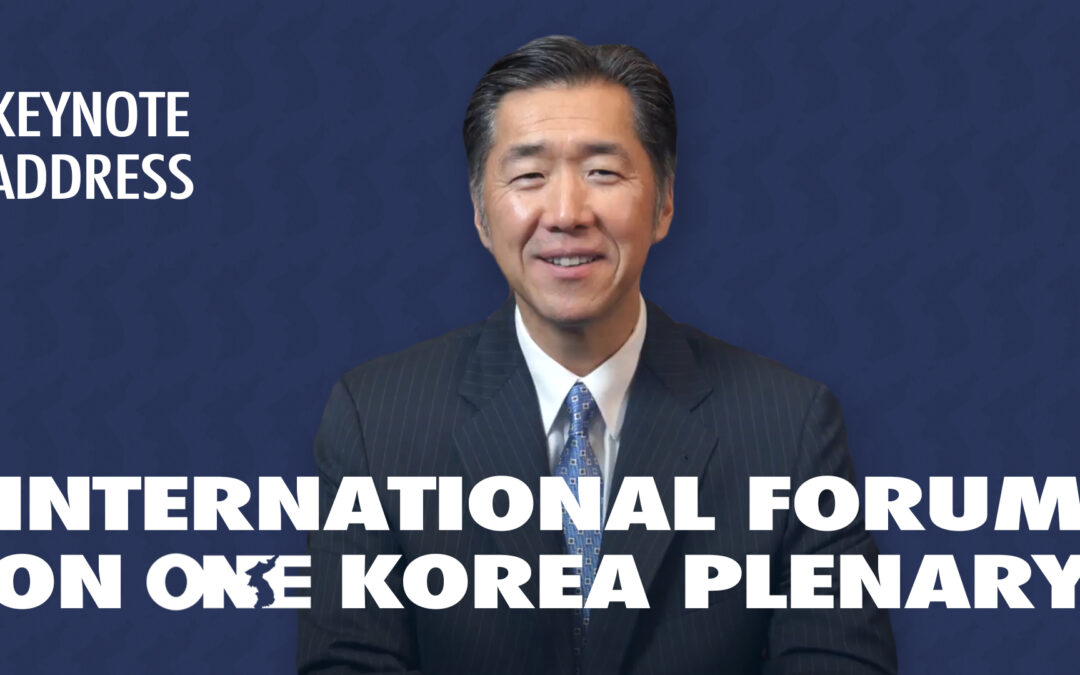 I would first like to thank everyone who has helped to make this virtual convention a success. The many and varied discussions that have taken place will certainly serve to focus greater attention on the movement for a free and unified Korea.

This movement is timely. Today, we have the opportunity to significantly advance the goal of unification as the situation in the North becomes increasingly unsustainable. The state economy grows dysfunctional as its centralized industries languish and corruption, linked to a growing black market, is spreading among the elites. There is evidence of a serious dispute between those committed to its aggressive security policy and those who would like to see greater economic reforms.

Kim Jong Un’s public warning that the North will likely have to endure another “Arduous March” – referring to the famine conditions of the 1990s – indicates the path the current regime will take. The hopes of change engendered by the peace talks of the past several years have proven to be false; the North is taking a more belligerent approach to the South and the United States, as well as enforcing more draconian restrictions and punishment on its very own people.

However, change will certainly come to North Korea, and thereby to the peninsula as a whole. The two Koreas will be united one way or another; it is a matter of when, not if. The question for us today is: What kind of a nation will that united Korea be? Do we merely wait to react to change when it happens, or should we, as Koreans, take responsibility now to shape the future of that new nation? What approach should we take toward building one Korea?

We must start with the end vision in mind and, then, consider how we can realize that vision together. I call this the Korean Dream, and have articulated its details in my book of that name. It draws upon the founding providential mandate of hongik ingan for the Korean people, “to live for the greater benefit of all humanity.” The hongik ingan ideal lies at the core of 5,000 years of Korean culture and history. It has been a touchstone and moral compass at critical moments in the past. It offers a selfless vision, rooted in universal principles, that far transcends the current ideological division in longevity, durability, and scope.

This shared ethos that is in the DNA of all Koreans will not only bring us together but also inspire us to create a new nation. It epitomizes the original Korean spirit and will ultimately fulfill our ancestors ’aspirations expressed in the Samil Independence Movement. It is not merely the two Koreas coming together; it is the creation of a new nation that is rooted in the original hongik ingan ideal and the realization of our long- thwarted destiny.

Unification Led by the Korean People

As the hype behind the recent peace talks reveal, politics and government actions are not enough to bring about peaceful unification. There needs to be a strong citizens’ movement among Koreans in the South and the diaspora campaigning for one Korea with strong support from the international community. Government negotiations focus too narrowly on one issue, the North Korea’s nuclear threat, at the expense of the broader, more important issues of human rights and freedoms. The unfortunate outcome from all of the negotiations since the 1990s is a nuclear-armed North Korea that is a greater threat to the region and the world.

Ladies and gentlemen, we have to remember that apartheid ended in South Africa when a constant drumbeat of international public opinion drove governments to take action. The egregious human rights violations suffered by Koreans living in the North over many decades cry out for the same moral outrage and action. International public pressure must be mounted to address this human rights crisis by actively supporting principled unification based on the Korean Dream. Action for Korea United (AKU) is pursuing this aim tirelessly, working to build a consensus on Korea’s future, in South Korea and then across the diaspora.

South Koreans have to take the initiative toward unifying the peninsula, as they have the freedom and the means to do so. There needs to be an active discussion about Korea’s future, leading to a national consensus on the vision of unification. I believe that vision is the Korean Dream since it aspires to realize the founding ideals of hongik ingan and fulfill the Sam-il Independence Movement’s goal of creating a new nation based upon the highest ideals of a democratic republic.

The Miracle on the Han Falters without Unification

Ladies and gentlemen, South Korea is known globally for the “Miracle on the Han,” the remarkable economic transformation from a desperately poor, war-ravaged, agricultural society to a modern, high-tech economy, in less than half a century. This success was marked with the South’s ranking as the 10th largest GDP in the world just last year.

However, that growth is under threat because its economy is vulnerable for a number of reasons.

Export-led growth is reaching its limit, especially with Chinese competition intruding in traditional South Korean industries and markets. The South is also heavily dependent on imports, especially oil and gas, because it lacks natural resources; leaving it vulnerable to global price fluctuations. In addition, there is over-capacity in certain sectors, such as infrastructure, that needs to find new outlets for growth. Finally, an aging population with decreasing birth rates, and social changes to the traditional ideal of family, are creating severe demographic constraints on the South’s labor pool going forward.

In the long-term, unification will bring economic benefits that address all of these concerns. It would bring together the existing synergistic elements of both Koreas for the benefit of all. The South has a highly developed economy that is in dire need of new avenues for growth. The North provides those opportunities through its untapped natural resources, extensive need for new industries and infrastructure, an expanded labor pool, and in the long run, a larger combined domestic market.

However, to reap these potential rewards, some urgent changes are needed in South Korea’s economic structure. While a unified Korea has the potential to become an economic powerhouse, it will initially require significant capital investment. That, in turn, requires an efficient and creative economy in the South to sustain it.

Ladies and gentlemen, crony capitalism was the hallmark of South Korea’s remarkable industrialization in the 1970s and ‘80s. Government involvement in private enterprise was an essential part of what helped a war-ravaged South take the dramatic steps to modernize from its agrarian past. However, today, the chaebol system of crony capitalism stifles entrepreneurship, competition, increases corruption and sows deep class resentments in the population today.

As a result, frustrated, highly educated and tech-savvy youth lack opportunities for gainful employment, as well as a pathway to realize their dreams through innovation and creativity. South Korea has the highest rate of unemployment among college graduates of any developed nation. This is a huge waste of talent as well as socially unsettling. Fewer young people today are marrying and having families because they just simply cannot afford it. As a result, the number of births in South Korea was ten percent less in 2020 than in 2019.

I have long advocated opening up the Korean economy to greater competition through better access to capital as well as less restrictive direct foreign investment. One of the most important steps to accomplish this is to privatize Korean banking in order to make it more market oriented in providing financing to entrepreneurial-minded individuals as well as to small and midsize companies.  Such reforms would yield immediate benefits for the South, as more Koreans engage in innovation and capital creation.

Most importantly, economic reforms in the South would remove barriers and open opportunities for those youth currently being shut out by the system, especially when combined with the long-term economic benefits of a unified Korea. How remarkable and vibrant would the new Korean economy be, especially if it is built on sound and free economic principles? I firmly believe that once the young generation understands the dramatic transformation that is possible through the Korean Dream approach, they will become its most ardent advocates.

With these changes, Seoul could become the new business and financial center of Northeast Asia. The recent crackdown of freedoms in Hong Kong makes Seoul a natural alternative due to its strategic location, stable democratic government,  stellar infrastructure, innovative hi-tech sector, and relatively open markets.

With the financial and banking reforms I have advocated, it could become a hub in the Pacific Rim as New York and London are in the Atlantic sphere, making it one of the most dynamic cities in the world. As such, it would play a vital role in generating and attracting the international capital that will be needed for the development of North Korea and the region.

Ladies and gentlemen, a reunified Korea with a clear national vision based upon the Korean Dream will undoubtedly play a leading role in the 21st century. Not only will it help ensure geopolitical stability in the region, leading to global peace and prosperity; it will show the rest of the world that even the most extreme ideological and political divisions can be resolved with a unifying vision.

Furthermore, it will become a leader and a model nation, particularly for countries in the developing world that have endured similar challenges in their own history. Like most of the developing world, Korea experienced harsh colonial rule, and also had to endure a forced division rooted in the ideological conflict of the Cold War. Through principled unification, it will bring an end to those tragic legacies of the 20th century and show the possibility of national transformation for any country willing to adopt the Korean Dream paradigm.

The synergies that unification would bring would take the Korean economy to greater heights, clearly placing it within the top five economies in the world. The “Miracle on the Han” would extend to the North, offering tremendous opportunity and wealth for all its people. The banking reforms would create an entrepreneurial environment which would fuel innovation and greater capital creation, leading to greater investment, development, and growth. These achievements will put Korea in a unique position to inspire other developing nations, especially those who are seeking new models outside the traditional western ones; Korea’s history and story of transformation from the ashes of the Korean War to become a global leader will be something they could identify with and aspire to achieve.

If Korea can complete this challenging journey rooted in the Korean Dream, it will be a leading nation for the 21st century. With a clear vision followed by bold action, the Korean people can finally resolve the vestiges of colonialism and the Cold War, reunite their homeland, and in the process become a dynamic catalyst for development and peace in the region and world.

Thank you and may God bless you and your families!