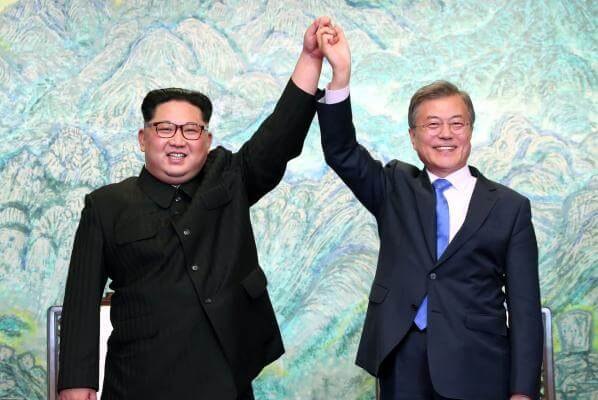 The historic Inter-Korea Summit held on April 27 marked the first time an inter-Korean summit has been hosted on the Southern side of the border, and the first time a North Korean leader has crossed the Military Demarcation Line that divides the two Koreas.

The “Panmunjom Declaration for Peace, Prosperity and Unification of the Korean Peninsula”, signed between Kim Jong-un and Moon Jae-In, rekindled hope, particularly in the generation who still remembers the pain of separation.  The Agreement promised resumption of meetings between war-separated Korean family members starting in August. Meetings between family members separated for 70 years by the 38th parallel have been stalled since 2015, after ties between the two Koreas deteriorated.

Kim Jong-Un himself described the people of the South as “the same people, of the same blood” and acknowledged that the two nations could not survive if they remained at war.

The summit is a significant milestone in the process towards reunifying Korea, but also a powerful reminder to the Korean people and the international community that it will take grassroots efforts to realize the dream of One Korea.

Action for Korea United is one such conglomerate that embodies the importance of these grassroots efforts. The coalition of hundreds of civil society organizations implement innovative programs aimed at cultivating  a connection between North and South Korea that taps into the shared heritage of the Korean people, transcending political and military divisions.

Following is an excerpt of the article written by Jennie Oh that appeared on UPI on April 27, 2018. See the full article here.

South and North Korean leaders Moon Jae-in and Kim Jong Un signed and declared an agreement Friday after their historic summit talks at the Peace House building, on South Korea’s side of the Panmunjeom border village.

“Chairman Kim and I have set an unshakeable milestone on the denuclearization, permanent peace and the shared prosperity of the people on the Korean Peninsula,” Moon said in a joint briefing with Kim after they signed the document.

The three-part document specifies ways to fulfill the improvement of inter-Korean relations to seek common prosperity and unification; the easing of military tensions between the two sides; and the permanent establishment of peace on the Korean Peninsula.

“I became profoundly aware that the South and North cannot live separately, as we are flesh and blood and compatriots,” Kim said. “We are not two different nations that should fight one another but, we are the same people, of the same blood, who must unite and live peacefully.”

As highly anticipated, the two leaders decided to seek a formal end to their state of war and establish a peace treaty through trilateral efforts with the United States or a four-way meeting including China.

“Through our firm trust in each other, Kim and I will hold regular summits and direct phone calls frequently,” Moon said.

He plans to visit Pyongyang this fall, according to the agreement.

The president added that government officials will also “closely talk and cooperate,” and civilian exchanges and cooperation will also take place for the reconciliation of the Korean people.

Under the agreement, the two Koreas will establish a joint liaison office in the North’s industrial area of Kaesong to enable “close coordination” between two governments as well as ensure smooth civilian exchanges and cooperation.

The finer details of denuclearization and negotiation on the terms are expected to be addressed by Kim and U.S. President Donald Trump, during their proposed summit in the coming weeks.

Trump has said the meeting is likely to occur in late-May or early June.